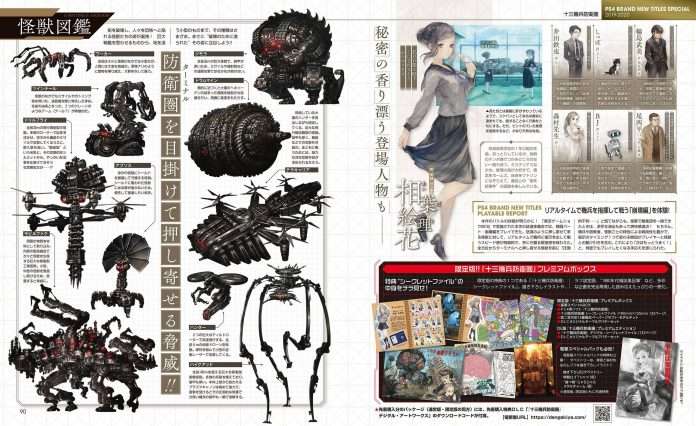 This week’s issue of Dengeki PlayStation Vol. 680 includes a feature on 13 Sentinels: Aegis Rim. The 4-page feature includes information on the types of sentinels and their respective pilots, as well as the types of enemies and new profiles for side characters. 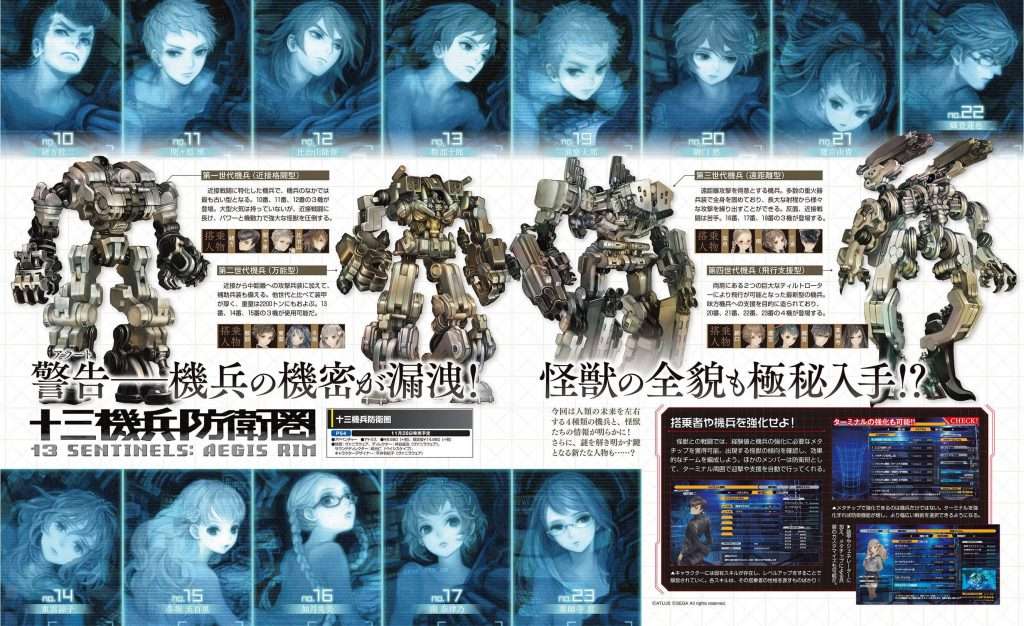 As described previously, there are four sentinel types: melee combat type, universal type, long-distance type, and flight support type. Each of these types are piloted by specific characters.

A mech specializing in melee combat, and the oldest type of the sentinels. The three sentinels of this type are No. 10, No. 11, and No. 12. It does not have much in terms of firepower, however it excels at closing the distance for close combat and overpowering the enemy with power and mobility.

The three pilots of these first generation sentinels are: Nenji Ogata, Ei Sekigahara, and Hijiyama Takatoshi.

The second generation of sentinels with a balanced combat approach. In addition to offensive weapons for close-range and medium distances, it also has auxiliary weapons. It has thick armor, weighing 2,200 tons. The three sentinels of this type are No. 13, No. 14, and No. 15.

The three pilots of these second generation sentinels are: Juurou Kurabe, Ryouko Shinonome, and Iori Fuyasaka.

A sentinel specializing in long-range attacks. It is armed with numerous heavy weapons, being able to launch a variety of attacks from a long range. However, it is lacking at close range combat. The three sentinels of this type are No. 16, No. 17, and No. 19.

The three pilots of these third generation sentinels are: Tomi Kisaragi, Minami Natsuno, and Keitarou Miura.

The latest version of sentinel, with the capability to fly with the use of two large propulsion engines on its shoulders. It is designed to support other friendly combatants. There are four sentinels of this type: No. 20, No. 21, No. 22, and No. 23.

In battle against monsters, you will earn experience points and machine chips. Analyze how the monsters will appear, and create an effective team based on that information. The other members that aren’t picked, as a defensive team, will intercept enemies who approach the terminals and lend support.

Footage of the battle gameplay segments can be seen in a previous post. 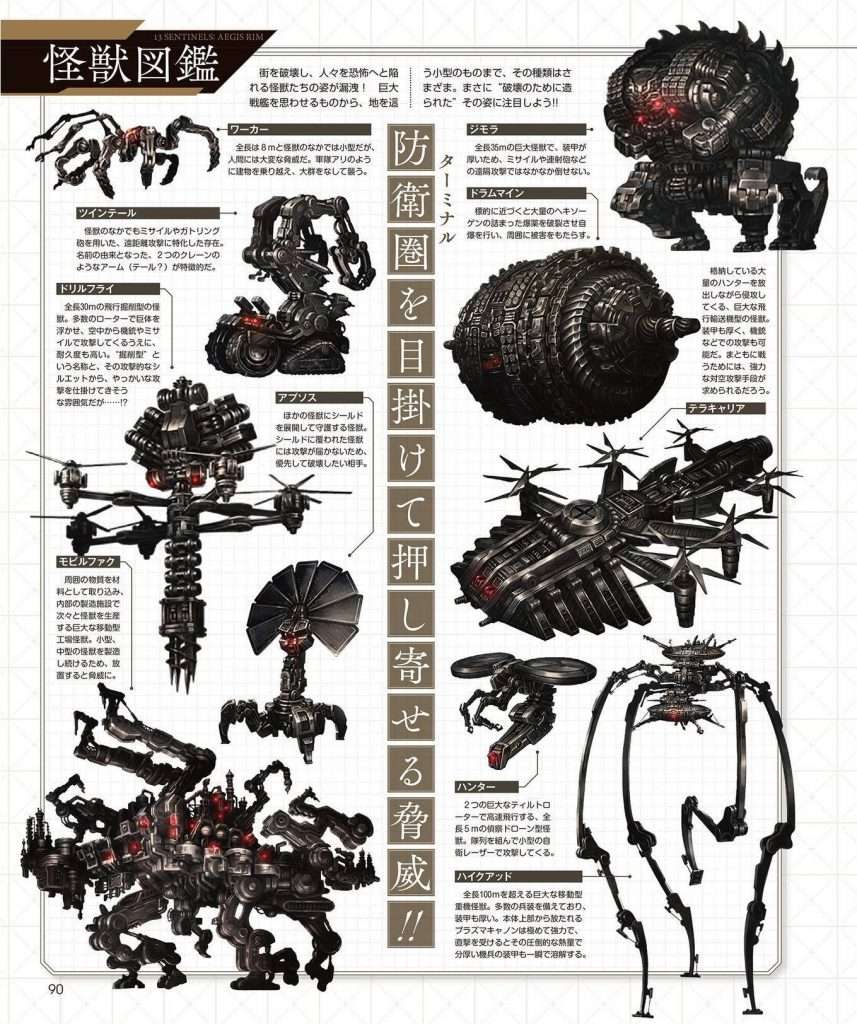 Numerous monsters appear, threatening the city with destruction and striking fear into the populace. There are various types of enemies, from large types with the appearance of huge battleships to small types. All of them are designed for destruction.

It has a total length of 8m, which is small among the monsters, but it still represents a serious threat to humanity. It attacks in hordes, like an army of ants.

Among the monsters, these ones are specialized in long range attacks using missiles and gatling guns. It is characterized by its two crane-like arms (or tails?).

A flying excavation type of monster with a total length of 30m. It hovers with the use of many propellers, attacking from the air with machine guns and missiles.

A monster that protects other monsters by deploying a shield. The monsters covered by the shield cannot be attacked, so taking these out first is a priority.

Incorporating its surrounding as materials, this is a huge mobile factory monster which produces other monsters one after another in its internal manufacturing facility. It is a threat if left unattended, due to its continuous manufacturing of small to medium sized monsters.

A huge monster with a total length of 35m, with armor so thick that it cannot be easily defeated with normal artillery attacks.

As it approaches its target, it releases a large amount of hexogen: an explosive substance, which it then commits suicide with, damaging the surrounding area.

A 5m long reconnaissance drone monster that flys at a high speed with two giant propellers. They line the target up and attack with small self-defense lasers.

A huge mobile, heavy machine monster which exceeds 100, in length. It is equipped with a large number of weapons and it has thick armor. It has an extremely powerful plasma cannon on top of its main body which, when delivering a direct hit, will instantly dissolve the thick armor of a sentinel due to overwhelming heat. 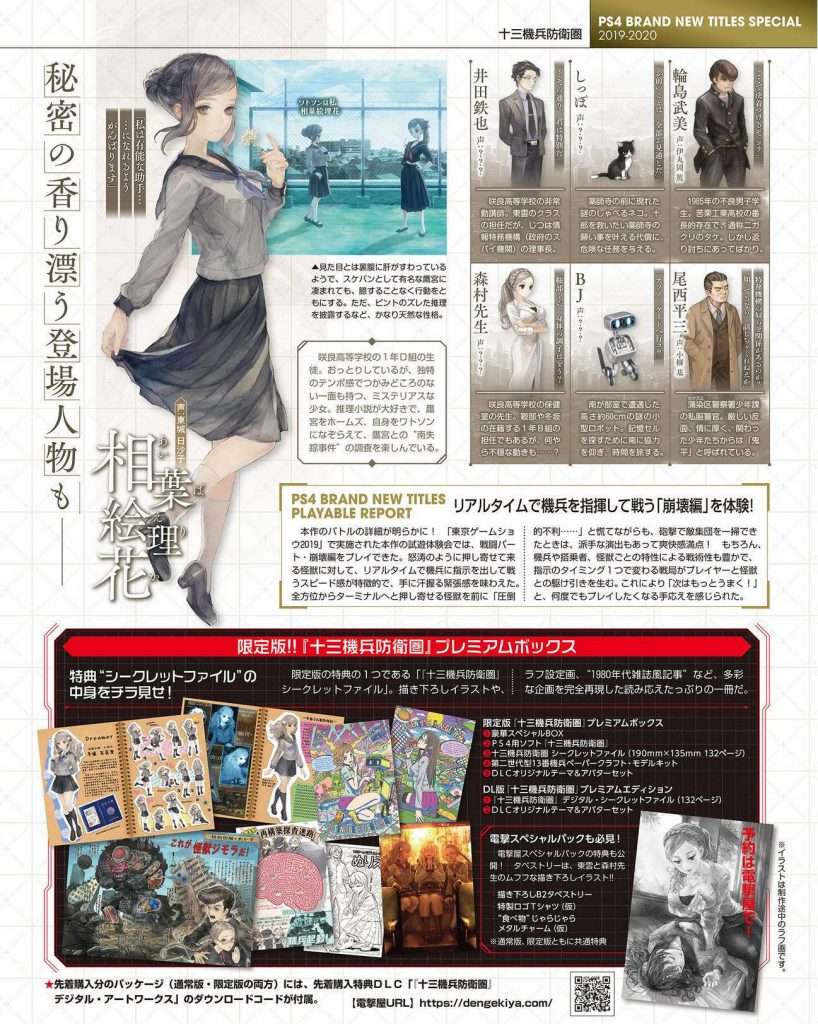 The profiles for the 13 main characters can be found here.

A first year Sakura High School student of class 1-D. A mysterious girl with a peculiar tempo and an elusive side. She loves mystery novels and likens Yuki Takamiya to Holmes and herself to Watson, where she enjoys going on investigations with Takamiya.

A part-time lecturer at Sakura High School. He is in charge of Ryouko Shinonome’s class, but is actually the chairman of the Special Intelligence Organization (a government spy agency).

A mysterious talking cat that appeared in front of Yakushiji Temple. In exchange for granting Juurou’s wish of saving the temple, it sends him on dangerous missions.

A high schooler in 1985 who acts as the leader of the delinquents at Nigakuri Technical High School. He is nicknamed Nigakuri no Take (a type of poisonous mushroom). However, he often finds himself being beaten at his own game.

The school nurse at Sakura High School. She is also in charge of Kurabe and Fuyusaka’s Class 1-B, but she also seems to be taking some unsettling actions…

A mysterious little robot about 60cm tall that Minami encounters in the club room. It asks Minami to help it find its storage cells, and travels through time.

A plainclothes officer working for the Kamazumi Ward Police Station in the juvenile boys division. He is strict but compassionate, and the boys he deals with call him “Demon Hei.”