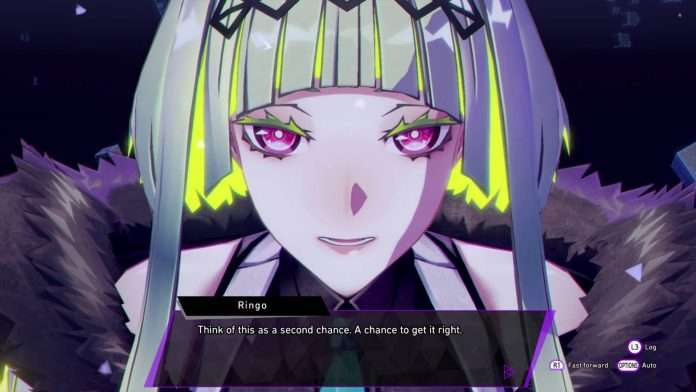 Atlus has released their annual Japanese online consumer survey for 2022, in order to learn more about their customers and improve their game development. This year will mark the seventh annual Japanese survey.

For the first time this year is an English version of the survey aimed at those who live in North America (the United States of America, specifically).

Every year, the survey contributes meaningfully to development at Atlus, with the company stating that the results “assist us in delivering unique and compelling gaming experiences, as we continue to pursue development that values passion and ambition.”

The survey duration is estimated to take approximately 45-50 minutes. The survey timeframe is from May 13th to May 15th. 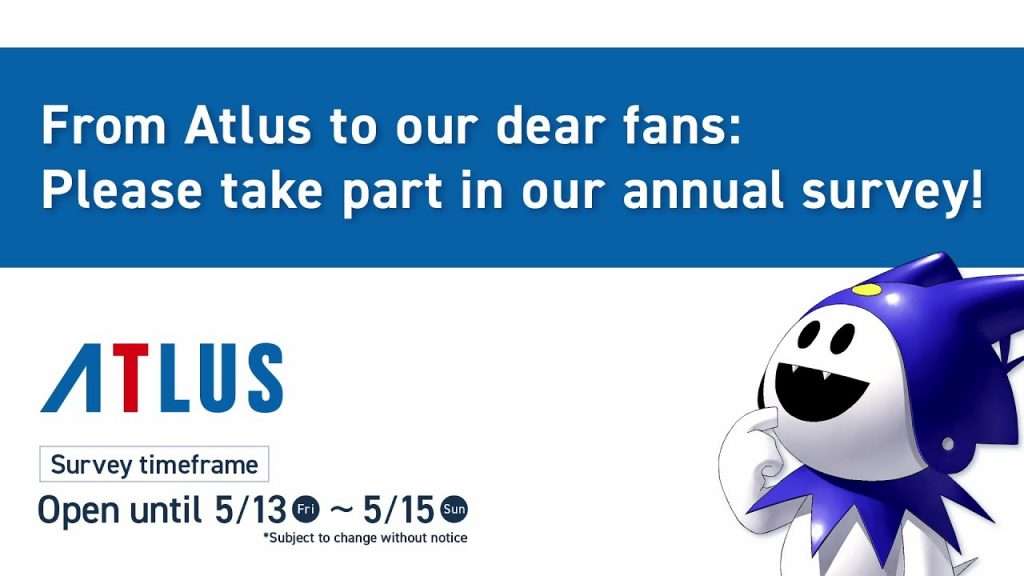 Q2: Please tell us your gender.

Q3: Please tell us your age.

Q5: How did you first find out about this survey? Select the answer that best applies.

Q6: Please tell us about your profession.

Q7: Please select the family and friends you live with. Select the answer that best applies.

Q8: Please select all of the following game devices that you own.

Q9: Please select all of the subscription-based services you’re subscribed to (even if they are shared by the family, if it is a service that you can use freely then please consider yourself to be subscribed to). [NEW QUESTION]

Q10: Among the platforms you own, how often do you play them?

Q11: From the devices you play video games on, how long do you play on those devices during workdays?

6 options per device, ranging from not used during weekdays to 10 hours or more.

Q12: From the devices you play video games on, how long do you play on those devices during weekends and holidays.

6 options per device, ranging from not used during weekdays to 10 hours or more.

Q13: For those who play on consoles (gaming devices connectoed to a TV or portable gaming device). Please select all the TV, monitors, etc. that you use when playing with consoles. [NEW QUESTION]

Q14: Please select everything that you desire from a video game on each platform.

Q15: Please select everything that can lead to you downloading a game on Steam.

13 different options included learning about a title that is not available on consoles / smartphones, wanting to play games that are popular at the moment, discovering the game in the Steam store, or when it’s cheap on sale.

Q16: Please select the reasons why you play games on Steam.

Q17: What are your favorite game genres for console games and Steam games?

Q18: Among the following games for home consoles (stationary and portables), which ones do you know of?

A list of 60 games (65 in the JPN survey), including Atlus games and such games as:

“PROJECT Re FANTASY” is listed once again.

Q19: Among the following home console games (stationary and portables), which have you purchased?

Among the games selected in Q18, there are 3 possible choices:

Q20: Regardless of whether you have played them or not, who would you recommend the following titles to? [NEW QUESTION]

For each game selected in Q18, there are 6 options:

Q21: Among the following unreleased home console games (stationary and portables), which are you planning to purchase?

Among the unreleased games selected in Q18, there are 3 possible choices:

Q22: This question is for those who know of Persona 5 Strikers. Did you know that Persona 5 Strikes was available to play for free as a PlayStation Plus monthly game? Please select the answer that best applies. [NEW QUESTION]

8 answers including “I downloaded it for free and played it for the first time,” I had already played it, but I downloaded it again for free,” and “I already own the PS4 version, so I didn’t download it.”

Q23: This question is for those who know of 13 Sentinels: Aegis Rim. Did you know that the demo was distributed on the Nintendo Switch? Please select the answer that best applies. [NEW QUESTION / JPN ONLY]

For the following questions, media for games that can be played on home consoles (stationary and portables) will be shown. Please answer each question after seeing them carefully.

Each of these questions have the following possible answers:

Q24: Please look at the above game screenshots, and then select everything that you feel about them.

Q25: Please look at the above game screenshots, and then select everything that you feel about them.

Q26: How much free time do you usually have per day?

Q27: Of the free time you have on a work or school day, and on a day off or holiday, how much can you spend it to play video games?

Q28: How often do you purchase game software (including physical and digital versions) for home consoles (stationary and portables)? Please choose the one that applies the most to you.

Q29: [Taken from answers given in Q18] If you were going to purchase the following console games, would you purchase the digital edition or the physical edition?

For unreleased games such as PROJECT Re FANTASY, Soul Hackers 2, Final Fantasy XVI, The sequel to The Legend of Zelda; Breath of the Wild, and Forspoken.

Q30: [For games select for digital edition in Q29] If there was a “digital deluxe” edition of the following console games, would you buy it?

Q31: For console games (stationary and portable), have you ever pre-ordered? If you have reserved a purchase, please select all that apply.

12 options with reasons influencing one’s decision to pre-order from watching trailers to social media, with a 14th option of “I have never pre-ordered before.”

Q32: Have you ever pre-ordered and purchased a game on Steam? If you have, please select all the reasons why you did so.

Q33: When do you tend to pre-order / purchase games? [NEW QUESTION]

Q34: What media do you usually obtain game information from? Please choose all that apply.

Q35: If there is a game you are considering purchasing, what kind of information do you use to decide to actually purchase it? Please select all that apply.

10 possible answers, including videos of people playing the game or information on sales rankings.

51 options including a variety of Japanese let’s players and Virtual YouTubers.

Q37: How much money on average are you free to use per month?

Q38: Among the money you are free to use, how much on average do you use for smartphone games in a month? [JPN ONLY]

Q39: For what reasons do you pay for smartphone games? Please select all that apply. [JPN ONLY]

9 possible answers, including “to play it for a long time, such as extending the number of plays,” “to get the item, I want,” or “to win the game.”

Q39: Have you ever played the “Persona” series? If you have, choose the first game in the series you played.

23 options (25 options in Japan, as it includes a couple of re-release editions the English one does not), listing every single Persona console game released from Revelations: Persona for the PlayStation and Windows in September 1996 to Persona 5 Strikers for Steam released in February 2021  (with the 23rd option being “never played the Persona series”).

Q40: Have you ever played the “Shin Megami Tensei” series? If you have, choose the first game in the series you played.

7 options, listing the Atlus and Vanillaware collaborated games from Dragon’s Crown for the PS3 and PS Vita in July 2013 to 13 Sentinels: Aegis Rim for the Switch in April 2022 (with the 7th option being “never played an Atlus & Vanillaware title”).

Per listed game (recent games such as Shin Megami Tensei V and Persona 4 Arena Ultimax Remastered), these are the following 6 options:

Q43: Please select all the things you expect from Atlus titles and that make it feel like an Atlus title.

Q44: If a sequel (numbered entry) in the following game series was to be released, what platform would you want to play it on?

Q45: Did you know that Atlus games have collaborated with the following titles? Please select which apply. [JPN ONLY]

“Action Adventure” was removed as one of the genres in last year’s survey, and has now returned.

Persona 4 Golden had been listed in the 2020 survey, removed in the 2021 survey, and has been reinstated now.

Q49: If a remake (the existing title with new elements added and improved visuals and controls) of a past game were to be released, what would you place importance on?

Q50: If ports (am existing title with no new elements added, just being able to play it on different platforms) of past Atlus game were to be released, would you want to play them? Please select all from among the following that you would want to play.

Titles (games that were already released on the above platforms have those platforms removed as options):

Q51: Apart from the actual game, around how much do you spend per year on game-related merchandise (character merchandise, sound tracks, food at collaboration cafes, etc.)? Please select the one answer that best applies. [NEW QUESTION]

Q52: Please watch the video below, and then write anything you feel about the characters appearing in it, and the content of the video. (Optional) *Please note that the video contains sound.

The video is a unique clip featuring Ringo from Soul Hackers 2 thanking the user for filling out the survey, and giving a response based on previous answers in the survey.

Q53: If you have any comments or requests for Atlus, please write them below. (Optional)