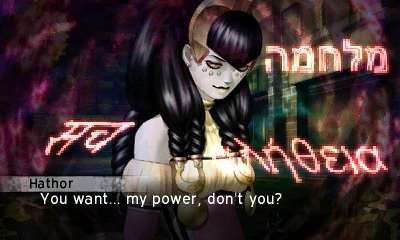 In Shin Megami Tensei IV: Apocalypse, bosses will often converse with the protagonist mid-battle, bringing up a dialogue choice. In the English localization, there is a specific instance against a certain boss where the dialogue choices will be in Japanese and not in English, and Atlus USA has apologized for this.

To encounter this bug, one’s selectable partner in battle must be knocked out before the moment occurs. Because of the slightly obscure method to achieve this, I did not experience the bug myself (or I would have mentioned it in our review), however Atlus outlines the circumstances behind it:

Gather around folks, we’ve got a story to tell, capped off with an apology for the upcoming RPG, Shin Megami Tensei IV: Apocalypse.

As a bunch of people pointed out, an image circulated this weekend of our English build having some unlocalized Japanese text still in it. I’m not gonna link it here because it’s from the battle at the end of the game and could definitely spoil some details for people. Let that also serve as your warning before you go looking for it.

Nevertheless, I asked our localization team about it, and they pored over the game’s text files looking to find out what happened.

…Yep, it’s in there, along with one other instance of Japanese text. It’s an oversight on our part, and we’re deeply sorry about it. We’ve discussed internally about the possibility of correcting it, and while fixing it is not off the table yet, if it does happen, it won’t be in a timely manner.

But if the burning question you’ve got is “ATLUS! How did you let this happen?” Let me try to explain.

First, we’re human. This is important, so before you start writing that angry comment down below, please remember this point.

Second, and this is the funny part, it turns out our QA department is actually too good. The two instances of Japanese text left in the game happen during a boss battle near the end of the game. As you may know, SMTIV:A has partners that are permanently with you throughout the game, and you can select the partner based on what abilities they have that complement your play style. (No more worrying about a randomly chosen Walter casting Agi on demons that resist fire. WALTEERRRRRR!)

Anyhow, just like in SMTIV, partners can get attacked and knocked out. In this particular battle, partners will return after 3 turns, and the errant Japanese text only shows up if you get to a point where the boss gives you a dialogue option WHILE your partner is KO’d. Our testers, who have been with the company for quite awhile, and who are well-versed in all things SMT (I think a few of them also were QA for the original SMTIV) were so good, they never ran into the situation of having an unconscious partner during the fight, and henceforth the dialogue in question.

We never realized that there was a specific set of circumstances for the text to appear in-game, and so it never got localized. And unfortunately, it will still be in there by the time the game hits shelves tomorrow. BUT! As our QA testers and reviewers in the media have shown, it’s a relatively rare set of circumstances that will lead players to encounter the aberrant text, and hopefully won’t even be discovered by the vast majority of players. (Of course, now that I told you how to find it, you’re probably all going to go out and test it, aren’t you?)

So where do we go from here? Well, first – a sincere thank you to those who brought it to our attention. While it might be too late for SMTIVA, we’re now poring through the Persona 5 script and other active localization titles to check for any conditional text we may have missed. Second, we’re going to look into being able to fix it, but we don’t know if it’s feasible or if we even have a timetable for it, but as soon as we know something one way or the other, we’ll let you know.

So, bottom line, we’re truly regretful this bit of dialogue slipped through the cracks, and hope it doesn’t impact your gameplay at all!

So be aware of the above if you ever have this happen to you during your playthrough of Shin Megami Tensei IV: Apocalypse.