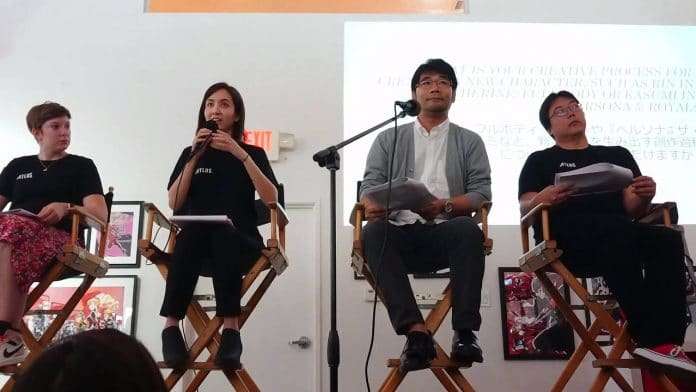 In addition to the announcement that Persona 5 Royal will be released in Spring 2020 in the West, the event’s special panel had a 12-minute Q&A session with Soejima. During this panel, Soejima answered design questions about Persona 5, Persona 5 Royal, and Catherine: Full Body.

A recording of the panel can be seen below, via Megaten Trivia.

Q: Can you tell us more about the art team that you work with and how you mentor them.

Soejima: In the beginning, I was telling them to imitate my art style, and we were working that way. However, lately, I’ve been telling them to go forward with their own unique styles. I really feel that bringing out their own characteristics and personalities to the designs will help carry Atlus forward.

Q: What is your creative process when creating a new character such as Rin in Catherine: Full Body or Kasumi in Persona 5 Royal.

Soejima: When I start up with the design, I only actually have a very broad set of directions to build the visuals on. When you’re designing for a game, you really don’t get to a know a character unless you get to play the character, and that’s when the character really comes to life.

The character comes together when the writing, the storyline, and the gameplay all come together with the design. But, when we present the game to the world for the first time, the visuals come first, so we of the design team really have a great responsibility to create visuals that really tell viewers how great the game is. It’s a lot of pressure and responsibility to create an image that really makes the game come to life.

Q: What inspired Kasumi’s design? What about Cendrillon?

Soejima: As far as Kasumi’s design goes, I don’t know if this really resonates with a Western audience. But in Japan, for people of my age who grew up reading manga and things like that that had heroines with ponytails and their club activity was gymnastics, it’s a really straightforward archetype for the heroine, and I really wanted to embrace that with Kasumi.

As for Cendrillon, “Cendrillon” is the French way to say Cinderella, and we wanted to create a persona for the character that would kind of complete her in the sense of using magical powers, and I think that if you play Persona 5 Royal you will understand the meaning behind the design.

Q: What can you share about the creative process for Persona 5 Royal?

Soejima: I feel like at this point whatever I say will be a spoiler, so I think it’s best if you guys should wait for the game to come out and play it for yourself.

Q: The story of Catherine takes place in America. What sort of American influences did you have in creating the characters?

Q: What are the highlights of working on Catherine: Full Body?

Q: What’s the biggest challenge to overcome during the creative process, and how do you deal with it?

Soejima: The challenge with every game is pretty much that, because a game is something that we want players to have fun with, and I feel like as people who make games, we should have fun with it too. So, the hard part is balancing and bringing my own personal preferences into the game design, while also making sure that it’s resonating with the fans as well. Finding that balance is always a challenge.

Following this panel was an autograph session.

The Atlus Art Exhibit 2019 at Art Gallery Nucleus will be taking place until September 1, 2019. There, various Persona 5 and Catherine prints, concept art, and merchandise are being exhibited.

There are also attractions, such as a chalkboard for visitors to draw on.

Update on that chalkboard drawings.

BTW I didn't write that. I would not do that to this event. pic.twitter.com/NxIBiJp3E7