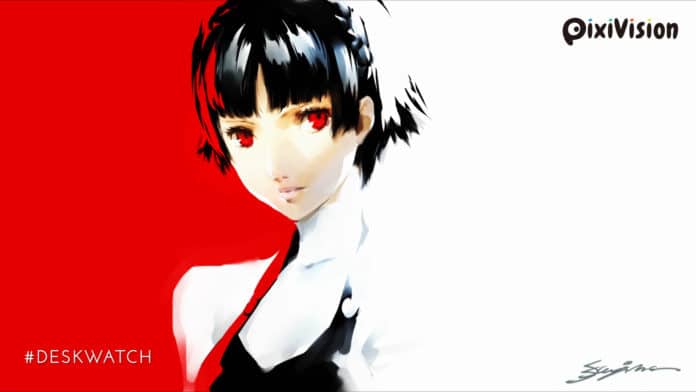 With their new recruitment drive, pixivision has conducted an interview with Atlus character designer Shigenori Soejima—behind the Persona series and the upcoming Project Re Fantasy—for their “#DESKWATCH” series, highlighting the creative environments and processes of artists in different entertainment mediums.

Some segments of the interview:

How did you start working at Atlus?

It was 1995. I just graduated, and Atlus had just started to produce Revelations: Persona.

I started working there as a designer, but at the time the separation between tasks wasn’t so harsh so I ended up doing a little bit of everything. Even pixel art.

Why did you choose Atlus?

It was because it wasn’t such a big company at the time. (laughs) I thought if I were to enter a big company, I wouldn’t have had much freedom to do whatever I pleased. On the other hand, at a company like Atlus I had many opportunities to give my contribution.

What software are you using mainly?

Paint Tool SAI and Photoshop.
For the part where I use my pen tablet, I use SAI. So lines, coloring… I use Photoshop mainly to adjust the colors and to add special effects. Sometimes I also use CLIP STUDIO.

Do you use a LCD tablet or a regular one?

I’ve been using a regular tablet for the longest time, ’cause I didn’t like the idea of hiding my illustrations with my hand. However, I heard so many times about how great LCD tablets are that I’m thinking to get one. (laughs) I’m a creature of habit. If there’s a device I like to use, I’ll keep using even after it gets obsolete. Other members of the staff, though, use much newer things.

What are your must-have items?

My headphones. I use BOSE and AKG. The latter are the result of a collaboration between AKG and Persona 5.

Since headphones are your must-have item, I imagine you listen to a lot of music while you work!

Yes, mainly video game music. Or better, the music from the game I’m currently working for.

The atmosphere of my illustrations changes quite a lot according to what kind of music I’m listening, so I always try to get the BGM music data in advance to use it while I’m drawing.

Can you tell us something more about Atlus work rules?

Core time is from 11 until 16. During that time span, you should be at the company. But since work hours are flexible, they tend not to be too strict. You can get to work early in the morning and go home 8 hours later, or you can get to the office just in time for core time, at 11 o’clock.

What do you do in order to rest your eyes and hands?

I think it’s really important to choose the perfect chair. My company really values a nice work environment, so everyone is usually sitting on a very nice chair.

Us designers, unlike illustrators, don’t really keep drawing for hours and hours. We often look at materials and resources or have meetings. That’s why I don’t think the burden on our bodies is too big.

Can you tell what goes inside the head of a character designer? How can you become good at it?

“Character design” means to create the setting for a certain character, but I think that the ability to draw is a prerequisite in order to be able to convey all their characteristics.

A thing I realized when I entered this company is that even if you’re good at drawing, that doesn’t mean you will make a good character designer. Competitions inside the company can get pretty harsh, but sometimes it can happen that designs from people who can’t draw end up being adopted. For the initial concept, stick figures are usually better than super detailed characters.

It might be hard to get good at design if you’re not that good at drawing, but I’m pretty sure that “drawing skills” and “design skills” are two completely different things. I realized all these things after joining Atlus, and since then I’ve always been drawing to increase my skills as a designer. 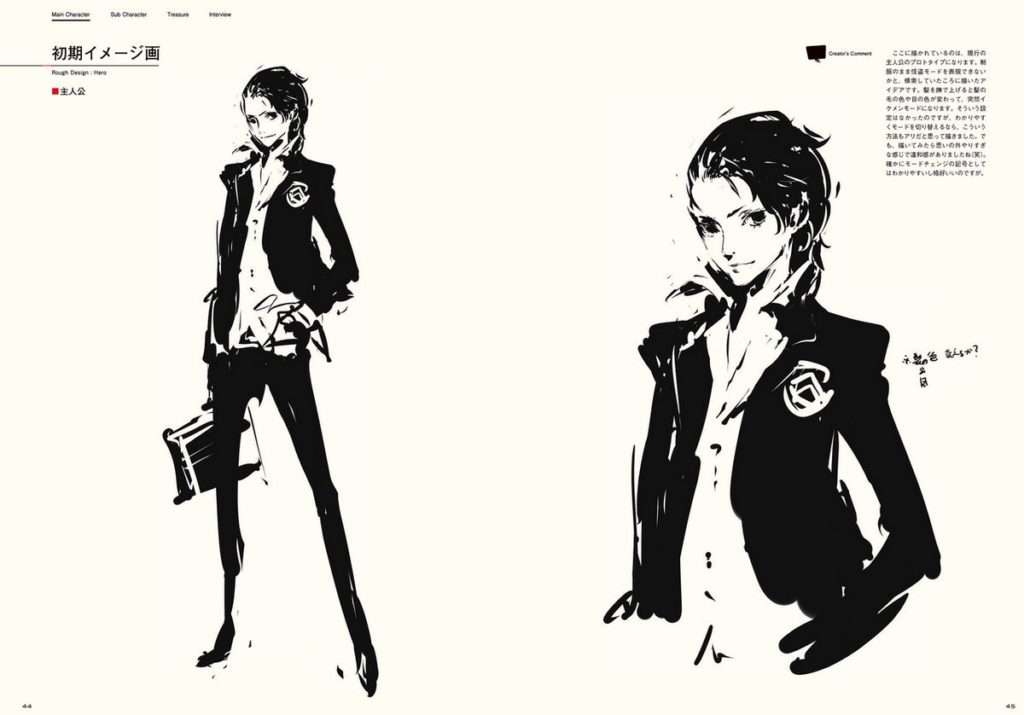 What is the best way to increase your skills as a designer?

Of course, it’s important to observe what’s around you… But there’s something less vague that you could do.

Personally, I started from asking myself: “What’s the thing that I enjoy the most?”

I think when you start drawing something you’re always influenced by what’s popular at that time. Then, you start looking for ways to be different from the popular creators. However, you don’t always get results right away. I was even scolded by my boss because I couldn’t find a satisfying output, a way to be different. (laughs) He told me to just be myself and to draw what I felt like drawing.

Since that moment I started actively thinking about how to create something that was different from whatever came in the past. I started to find the things I was missing.

It’s important to continuously try to perfect yourself, both by studying and by finding new interests.

I think that the designs for “personas” appearing in the Persona series are very cool and stylish. How are these creatures born?

The first thing that I consider is what kind of impression that persona will leave when it meets the eye of the player.

Do you want it to be cool? Scary? I mix different ingredients according to the kind of persona I want to create.

However, designs that are too easy to understand can end up resulting quite boring. I like to add elements that create a little mystery… I want the players to think “why does this persona look like this?”. My intent is not only to create good looking creatures but also to make the player curious about the original setting for each of them. 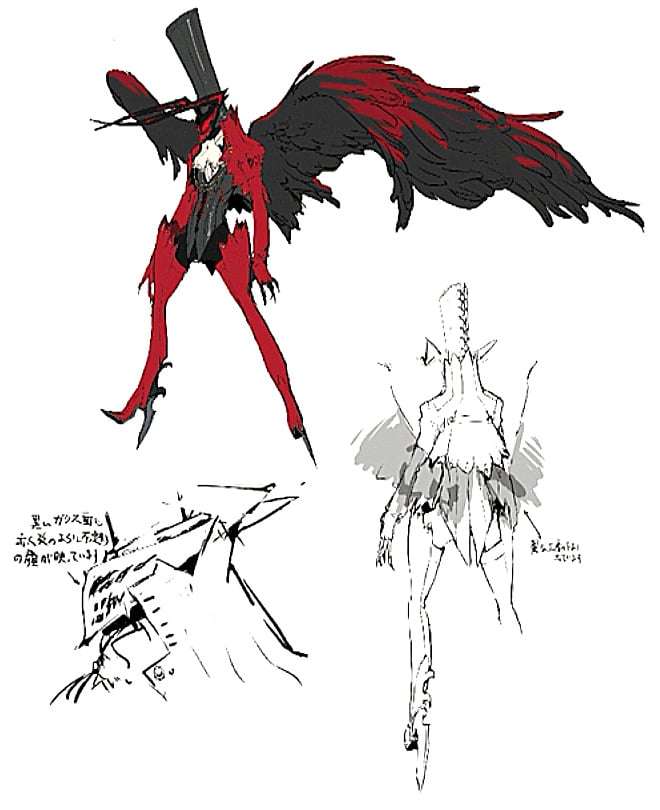 I would like to ask you something about recruiting. What made you decide to recruit new staff?

After Persona 5 was released, the same team is considering to work on another project, Project Re Fantasy by Studio Zero, which I’m working on as an art director. Apart from that, Atlus is planning to launch a new project for Shin Megami Tensei 25th anniversary, but we don’t have enough staff to cover all that…

We are especially looking for artists, and we heard that the best place to find them is a certain treasure cave called pixiv.

You can read the full interview via pixivision.

A new video released for this #DESKWATCH interview, by Shigenori Soejima, of Persona 5‘s Makoto Niijima.

The first Persona 5 illustration video was released on September 18, 2015.