Next, we would like to ask about the cover you drew for this collection. What are your reasons for choosing Futaba?

Soejima: Futaba is a character that I like in the game, and she’s got that mainstream popularity and kitsch feel to her. I find her to be the closest embodiment of Persona’s design as a whole.

Was Futaba a clear decision on your part? Or were there other candidates?

Soejima: I had trouble picking the character. I like Chie from P4 as well and considered drawing her for the cover. There were several other fans who liked her besides myself, which would have made the book easy to sell. But it would be strange, I thought, if the character on the cover was not a recent one—if Chie were to suddenly reappear. That was where my worries began.

If I chose a character without regard for the game’s recency (as with Aigis in the first volume), the book would look more like a collection. However, it’s been a long time since the release of P4, and new fans of Persona by way of P5 might not recognize Chie. I jumped between both of these arguments, and in the end, decided to use a character from a recent work, namely P5.

Soejima: I had another reason for picking Futaba. While I was still deciding between characters, I had the idea of inserting their respective games’ elements into the illustration. By including their iconic characters, fans of those games would notice them the moment they saw the cover.

Futaba was the most natural choice for carrying out that plan. She’s someone I can play with, even in pictures, with her headphones, geeky T-shirts, and toys. This behavior was so normal for her that she was the most convincing choice.

So it was the affinity with the mascot characters that decided it. The mascot dolls are the sheep from Catherine, Koromaru from P3, Teddie from P4, and Morgana from P5.

Soejima: I’m glad you noticed that with the mascots. Again, I have my reasons, but one of my biggest in choosing Futaba for the cover was that I feel the best when I’m drawing her.

”Liking Chie and Futaba” and “feeling the best when drawing this character” are both valid arguments for deciding who to use for the book’s cover; there’s nothing to criticize there. It would’ve been an acceptable result no matter which one you chose.

Soejima: Thank you very much. There’s someone else who makes an appearance in this cover besides Futaba and the mascots, so please try looking for them. (laughs)

Thank you for making it so elaborate. (laughs)

Soejima: I make art, yes, but I make art for games. I wanted the cover to show that I was an illustrator employed at a game company. I had put the company’s name on Futaba’s shirt as a way of showing that off, but then I considered whether it would make sense to put that there on the face of the book and ended up scrapping it. (laughs)

As the Phantom Thieves would say, “We’ll take your scrapped art.” (laughs) 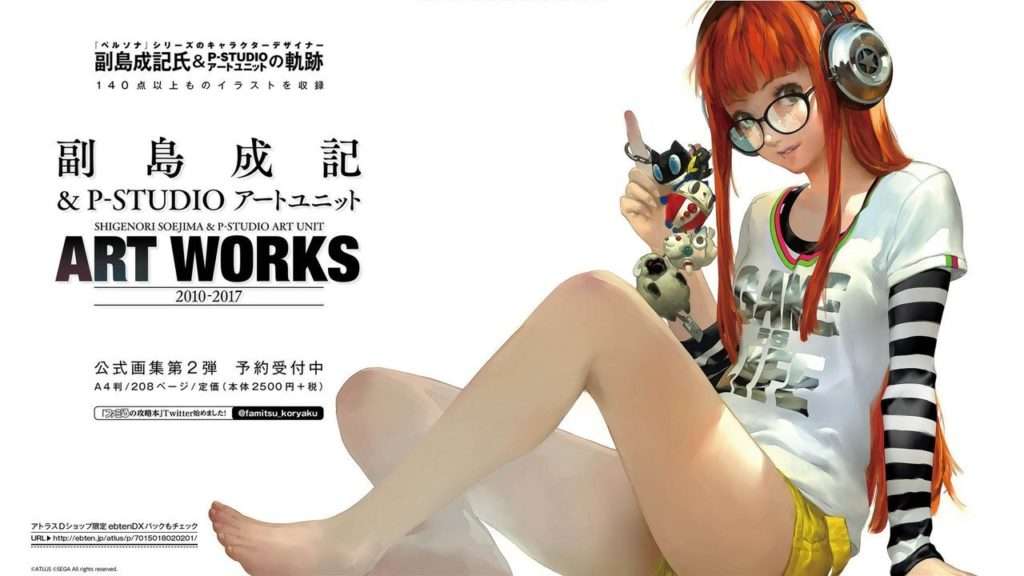