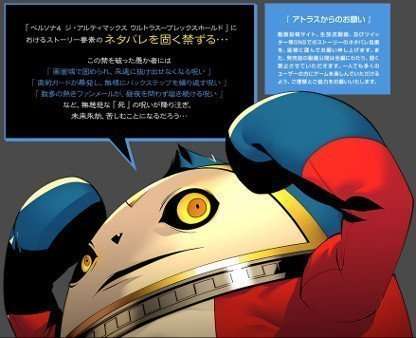 As has become the standard with Persona games, Atlus has put out a spoiler warning for Persona 4 Arena Ultimax, following Persona Q‘s, with the game releasing this Thursday in Japan.

The spoiler warning depicts Shadow Teddie threatening those who would spoil with suffering and death, as well as a more formal request from Atlus to not spoil other players by posting videos online, by streaming live video or posting spoilers on various social media.

As some have already received the game, Atlus states that they strictly prohibit any video of the game being posted online pre-release.