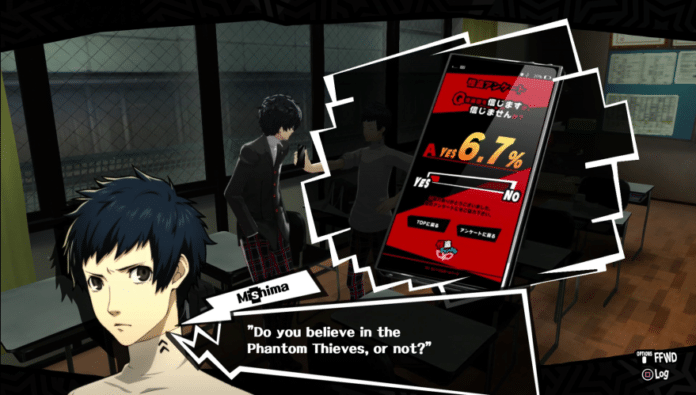 In January 2018, Atlus released their annual consumer survey and stated that part of the data from the questionnaire would be released at a later date.

Today, prior to the broadcast of the Persona 5 the Animation “Dark Sun…” special broadcast, they released the survey results for the last question, which was “Do you believe in the existence of the “Phantom Thieves”?“

There were a total of 15,555 participants who completed this survey, which was conducted from January 26 to January 30, 2018.

Overall, 53.4% of those who filled the questionnaire answered “I believe in the Phantom Thieves!” 21.9% answered, “I think their existence is a good thing.” A total of 75.3% of respondents were therefore in support of the group.

Additionally, 69.9% of women believed the most in the Phantom Thieves, with approximately 10% more women believing in all age ranges compared to men.

The press release states that the Phantom Thieves have begun their activities again, infiltrating the large game event “The Game Awards 2018” in Los Angeles on December 6th. Today the Persona 5 the Animation end-of-the-year special broadcast “Dark Sun…” is scheduled to broadcast, and attention is focused on it for further activity from the Phantom Thieves.