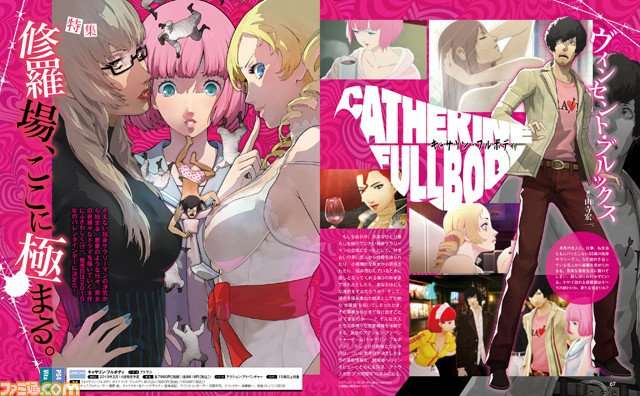 The puzzle action-adventure game remake of Catherine: Full Body has been announced for a Valentine’s Day release date in Japan for the PlayStation 4 and PlayStation Vita, on February 14, 2019.

The game stars a salary worker called Vincent tied in relationship troubles which lead to dangerous nightmares he must escape from every night.

The issue of Weekly Famitsu magazine #1554 releasing on September 13, 2018—or the September 27, 2018 issue—will feature Catherine Full Body with long-awaited new information and an interview with the developers.

Famitsu has released preview screenshots from the feature:

The Famitsu article will be over 8 pages long. Vincent, the hero, has been dating someone for 5 years and he is her fiancé. With a desire to have an easy, free life, he cheats on his fiancée with a beautiful woman he meets one day.

Vincent’s nightmares begin when he starts cheating, and many demonstrations of this will be coming soon. How does the “3rd Catherine”, who first appears in this game (right picture) relate to the story…?

“Men who cheat end up in nightmares, lose their lives in their dreams, and die in the real world as a result.” The puzzle action part of the game embodies this rumor. For those who want to play the game just for the story, there are different functions and difficulty levels available so that they can enjoy the game to the fullest, until the end.

Catherine: Full Body was previously announced for a 2019 release date in the West.