Following the announcement of the “DARTSLIVE x Persona 5 Royal” collaboration campaign set to start on October 23rd, details for the event have surfaced.

“Count Up” is a darts game where players compete to achieve a score higher than 300, using the fewest number of darts.

Designed after the setting of Persona 5 Royal, various backgrounds and sounds from the game will be shown with every throw.

Additionally, special “Award Movies” will be played during the game when a high score is achieved. Achieving a high score will reward the player with finishing touches by the Phantom Thief members.

DARTSLIVE2 machines will distribute “Picture Theme” game backgrounds of the characters based on the last digit of the player’s final score at the end of a P5R Count-Up game. Get your favorite character background!

0 is the main character. 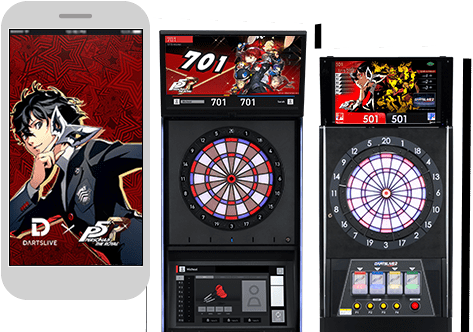 By clearing specific missions, you can gain treasure points and exchange them for various bonuses related to playing DARTSLIVE. Some of these include completing tutorial missions and defeating the bosses that appear in Palaces.

Some of this content includes smartphone wallpapers of all Phantom Thief members.

Boss characters that appear in Persona 5 Royal will appear as part of this collaboration. There will be “Palace Missions” which everyone can challenge together. The more dart missions that are completed, the more you can contribute to conquering the Palace. Destroy the bosses together and advance the story, rewarding every participant with a clear bonus.

This campaign is operated by DARTSLIVE and not Atlus, and the campaign is only being held in Japan. The campaign requires a smartphone as well as a DARTSLIVE account using the app, and dart missions are completed by playing on DARTSLIVE2 or DARTSLIVE3 machines.