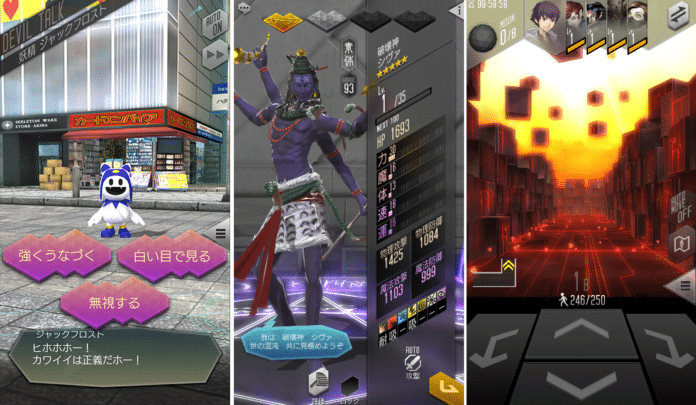 Following the first information on Dx2 Shin Megami Tensei: Liberation in Famitsu, Atlus has released direct feed screenshots of the game, character portraits and demon models, as well as more details about the game and scenario.

As previously revealed, the game will use the Press Turn combat system, where striking weaknesses will gain actions, and striking resistances will lose them. Other series familiar features such as negotiation and fusion will feature, as well as new features such as the Aura Gate, which will allow the player to explore 3D dungeons.

Under supervision from Atlus, familiar demon designs have been reproduced in high quality 3D.

The scenario of Dx2 is being written by Makoto Fukami, known for his work on Psycho Pass. The character designer is Tatsuro Iwamoto who worked on the Ace Attorney titles.

Devil Downloaders, known as “D x 2,” those who have the power to summon and use demons through the application of a smartphone app.

The player will be led by a mysterious figure to gain that power, they will become a member of the secret organisation known as the “Liberators,” who guard the world and will be caught up in a battle between D x 2, alongside others, including the popular video maker Megakin.

The name of the enemy is the “Acolytes,” another D x 2 group who act based on their own philosophy. They secretly execute people with a high “empathy index,” who are obstacles to their purpose.

On the other side of society which appears peaceful, malice of the people is quietly transmitted, and the battle of the Devil Downloaders is going to intensify.

Members of the Liberators

The Main character represents the player. By downloading a game app recommended by a famous video distributor, they will be caught up in the conflict between Liberators and Acolytes.

Taro Fuse is the leader of the Liberators. He is a popular video distributor on “Mega Tube.” Originally he was a rapper, but he couldn’t sell anything. His hobbies are film criticism and radio control.

Ryuusaji Rika is a cool beauty and a gun maniac. She is bad at reading the room, and moves at her own pace. She will investigate the case alongside the Hero who has just joined the Liberators.

A demo version of the game will be exhibited at the Tokyo Game Show between September 21 and September 24. A demo to allow the player to summon demons in VR will also be available.

Dx2 Shin Megami Tensei Liberation will be released for iOS and Android smartphone devices in Japan in 2017.