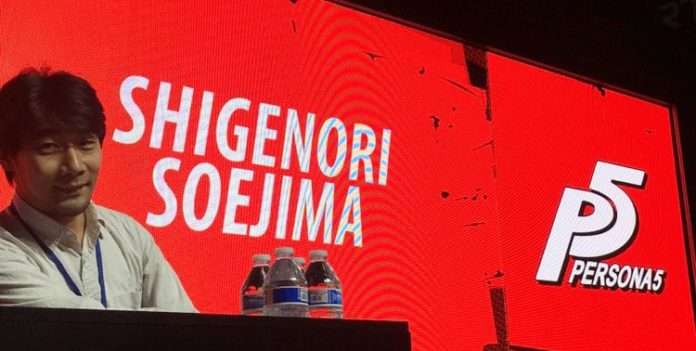 Following the E3 2016 character design talk with Persona series character designer Shigenori Soejima about Persona 5, the summary of the last day’s event which was an hour-long Q&A session with the fans has been summarized.

How much freedom do you have when designing the characters? Do you have free range or are there guidelines you have to follow?

Soejima essentially has free reign when designing characters. Instead of design constraints, Soejima’s goal is to create characters who will be appealing to the players.

At what stage of development does character design begin?

Character design starts during the conceptual phase of development. The first design created is usually the protagonist, since he serves as the game’s poster child.

What characters are your favorite?

While Soejima likes all of the characters, he especially likes those with short hair so one of his favorites is Makoto Niijima from Persona 5. Morgana from Persona 5 is easy to draw and because they serve a mascot character purpose like Teddie in Persona 4, Soejima hopes fans like Morgana.

What do you draw in your personal time?

In order to flex his imagination, Soejima’s personal illustrations—unreleased to the public—are rather different than the ones officially put out by the Atlus brand. Contemplating that “one day I would like to show off what I draw personally,” Famitsu speculates whether we could see Soejima’s different style in the future.

What inspired you to become a character designer?

The fighting games that were popular in the 1990s. In earlier games, where the character was a small pixel that had to be moved, the fidelity was stronger in fighting games. The charm of those characters and their animations made Soejima think that he also wanted to design game characters.

What is one of your most memorable moments being a character designer?

I like it when players enjoy the characters I’ve designed. Soejima enjoys looking at fan art and encourages people to send their work to Atlus.

Anything you are looking forward to here in Los Angeles/E3?

“He’s been really busy throughout this E3 that he really couldn’t spend too much time outside it. Last night was the first time he could enjoy a nice big juicy burger!… He really enjoys and appreciates all of you coming to these live events and that’s what he’s enjoying the most right now.”

Soejima’s favorite shows are news broadcasts (of Japan and of the world). The reason for this is because it helps him determine what is being sought from games. Additionally, he enjoys children’s shows like Power Rangers and Pretty Cure because they send children positive messages.

The moderator of the panel asked Soejima about his favorite Gundam series, and he responded that it is still the first.

Because companies embrace a lot of people from the same trade, it’s not often that the opportunity for a collaboration arises. Soejima asks that fans send in their requests for collaborations.

Many voice actors state that their dream is to play the part of a Gundam pilot. Similarly, Soejima would love to contribute to Gundam character design. This was met by a big applause from the audience.

What is your dream project?

Soejima says that his dreams are projects which are loved and talked about by many people. With 2016 being the year of Persona‘s 20th anniversary, Soejima wants to do his best to earn fan support and grow the fanbase for the future. Soejima said, “My dream is to continue following along this path,” to which the audience applauded.

Finally, Soejima said, “I think of the people who will look upon my illustrations, such as the fans I’m meeting at this E3. I wish to make a games that can be shared with all of you and that you can look forward to in the future.”

Translation help thanks to Setsu00 of NeoGAF and Mystic of TRADUKO Soft.

What inspired you to become a character designer?

What is one of your most memorable moments being a character designer?

Anything you are looking forward to here in Los Angeles/E3?

Pictures of the Booth

Shigenori Soejima drew illustrations on the booth at the end of the event.

Pictures of the Atlus booth (via @garfep).