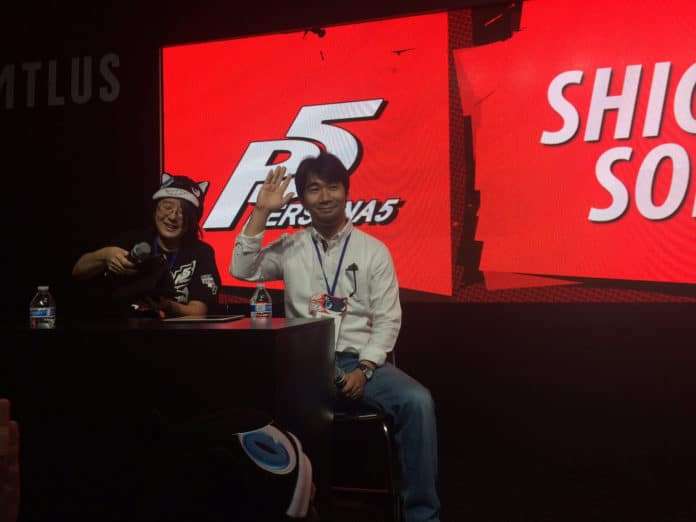 RPG Site was present and they took note of the design questions Atlus had written for Soejima, and his answers.

Q: Where do you get your sense of style?

Soejima began working on designs for Persona 5 during Persona 4‘s development. Those designs spilled over more from Persona 4 as the story became fleshed out.

Q: The design of the school uniform in Persona is aggressive. Was a lot of work put into the color choices?

Red wasn’t decided as the predominant color from the start. Persona 3 was blue and Persona 4 was yellow. Red is a very passionate color, so it was naturally chosen to be Persona 5‘s color.

Q: Persona 3 and Persona 4 were in countryside towns. Does the city give you leeway?

Soejima hopes that by playing P5 we can get a taste of what living in Tokyo is like. It is more average than the country side.

Q: Who is the possible most popular Persona 5 character going to be?

He doesn’t understand how you even create a character to be that popular. The first impression is always how a character looks, and he hopes fans will fall in love with the characters in Persona 5.

Q: We see headphones a lot on your characters. Is there something you signify with this?

The Persona 3 protagonist was shutting himself away from other people. Persona 4‘s Yosuke was more in touch with what’s popular. That’s why they wore them. In Persona 5, Futaba Sakura is wearing headphones and that also reflects her personality.

Music is a huge part of Persona as a whole, so Soejima always wants to have a character connect to that aspect of the games.

Q: When you design a character what’s harder? Starting a new design or trying to add unique features?

Starting from the beginning is the hardest. It’s not even just about one individual, Soejima finds it hardest to make them work together; as a whole group. He has to consider the end result of the party’s style.

Q: You live in Tokyo. Do you see anyone on your commute and think that person belongs in a video game?

He creates characters he feels like he could recognize in real life. He doesn’t actually see someone and use their image.

He sees a variety of people and pays attention, like tired salarymen. He wants those types of people to appear in Persona 5.

Q: Are you nervous making a new Persona game to continue its legacy?

Yes, there’s some nervousness. However, a lot of the staff is still the same like Hashino and Meguro. But expectations are high because of how long we’ve had since the last Persona game.

Q: 8 years since Persona 4. Lots of changes in real culture. What changes have you seen in the newer generation?

Teenagers haven’t changed as people much. The change of stage still effects how these teenagers act though. It’s different in how they communicate in the country versus the city. We think Persona 5 reflects these changes.

The location of Tokyo is greatly different from Persona 4‘s countryside. In a small town, people will generally know the names of each other and it is easy to get to know someone. However, in the city, people are more distant and they may not even pay attention to the face of someone near them. Also, during the time of Persona 4, social network services (SNS) weren’t as developed as they are now, making for a big difference in how certain things are represented.

Additionally, RPG Site reports that Soejima became really excited when he saw someone cosplay as Chie Satonaka from Persona 4.

This post will be updated if a more complete version of the character design talk surfaces.