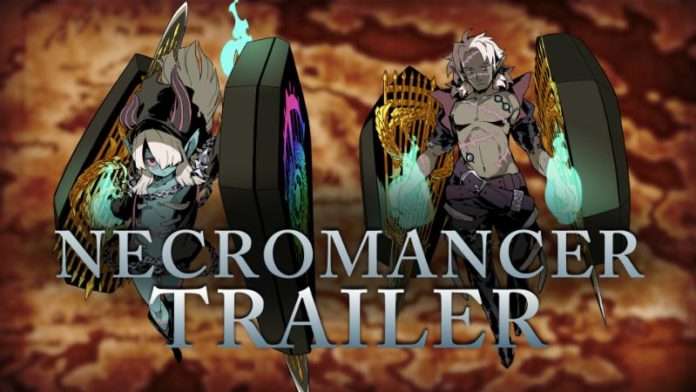 Atlus USA has released two new English trailers for Etrian Odyssey V: Beyond the Myth, featuring the Rover and Necromancer classes. Additionally, a preview of the art book included with the game’s launch edition has been released.

The trailer two weeks ago featured the Pugilist class.

Meet the real hunters of Yggdrasil, the Rover class. With an expertise in long ranged attacks, the Rover class can deliver some hard hits while in the back line. Their knowledge of nature is a hot commodity in battle, especially when it comes to special quests that involve exploring uncharted territory. Besides pursuing monsters, these hunters can also get help from animals to provide both offense and defense support.

The Rover class’ page on the official website can be found here.

It’s no secret that death awaits all who enter the Yggdrasil tree, but did you know that you can bring death into the tree? Ok, that sounds a bit confusing, but it all makes sense when we explain what the Necromancer can bring to the table. These masters of the undead arts aren’t the best fighters, but they can summon wraiths to do their dirty work instead. These wraiths are not only able to dish out and absorb damage, but can also be sacrificed for the greater good. Want to heal the party? Sacrifice a wraith! What about disable enemy defenses for a few turns? Sacrifice a wraith! Trying to increase the party’s magic strength? Sacrifice a wraith! Although Necromancers are a bit unconventional, they’re skills are invaluable to the party.

The Necromancer class’ page on the official website can be found here.

A preview of the 24-page art book included with the Etrian Odyssey V launch edition has been released.

Later today at 2:00 PM PDT / 5:00 PM EDT, Atlus USA will host a live stream of Etrian Odyssey V: Beyond the Myth through their official Twitch channel.