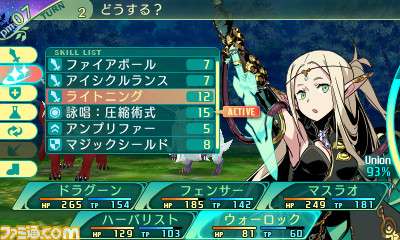 This week’s issue of Weekly Famitsu magazine issue #1428 will contain a 6-page feature on Etrian Odyssey V: The End of the Long Myth, with information on the game’s “racial skills,” “union skills” and different class appearance options. 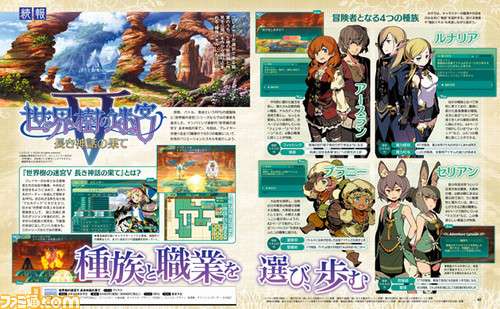 As detailed previously, there are 10 total playable classes in the game, and this issue will contain information on five of them: Fencer, Dragoon, Warlock, Masurao and Herbalist.

The issue will have an overview of the typical class skills, the variation in appearances, an overview of the “racial skills” each of the four races have (which are Earthrun, Lunaria, Therian and Bronie), and finally information on the previously teased “union skills.”

Additionally, Atlus has announced that they will be participating in “Machi ★ Asobi vol.16” with Etrian Odyssey V, which will be held in Tokushima Prefecture during Golden Week (April 29 to May 5).

On May 4, an “Etrian Odyssey V Special Talk Show” will take place. It will feature voice actor Yoshihisa Kawahara—who appears in the game—character designer Yuji Himukai, and director Shigeo Komori. There will also be an autograph session with Yuji Himukai.

The latest information on Etrian Odyssey V will be revealed, as well.

Machi ★ Asobi is an entertainment event for anime and video games which takes place at Tokushima. The event has occurred regularly since 2009, and entertainment companies and popular voice actors go there to exhibit and participate at the event.