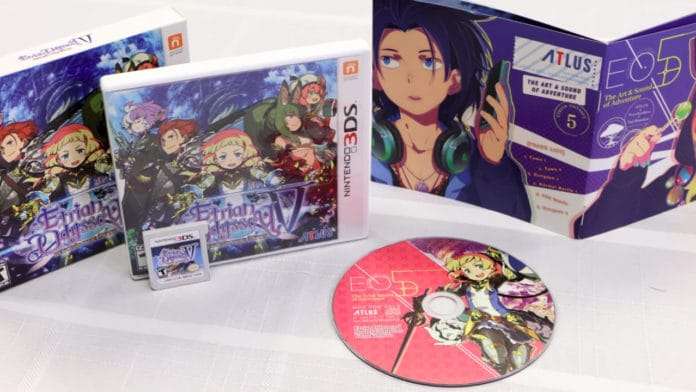 With its impending release in North America next week, Atlus USA has uploaded a video showing off an unboxing of the launch edition for Etrian Odyssey V: Beyond the Myth.

Additionally, Atlus has outlined a schedule for the game’s downloadable content.

They say that whoever reaches the top of the colossal Yggdrasil tree will have their greatest wish fulfilled. So what’s so hard about hiking up a tree? Well, besides being a gigantic labyrinth, the Yggrasil tree is home to many nightmarish creepy crawlies and terrifying FOEs just waiting for a tasty treat to come waltzing by. But don’t let that dampen your adventurous spirit because the Etrian Odyssey V launch edition contains many treasures that will strengthen your resolve! Here’s what you’ll get when you pre-order or otherwise grab the limited launch edition of the game:

Adventurers in Europe will receive the game and art book when they pre-order or purchase limited launch copies of the physical game.

A free Etrian Odyssey V Nintendo 3DS theme is now available for download, for free, on the North American Theme Shop. It will be available at launch in Europe.

We will also have additional character skins from previous series titles, additional quests to gain loot and EXP, and extra background music tracks as planned DLC.