Following the Etrian Odyssey V: The End of the Long Myth feature in the recently released Famitsu magazine, a new article has been released with new screenshots and new character class color customization options.

Alternate colors are available for all 10 classes in the game, with one for each of the four appearance options for a total of 40. These can be seen in this Famitsu article, in this one and in the latest Weekly Famitsu issue #1437.

12 new colors have been revealed:

New screenshots have been released which could not be included in the latest issue of Famitsu released on June 16, 2016. They show off more of the class Titles and their master skills.

A class that requires skill to be effective with and is adaptable to a variety of different situations.

An offensive-based Necromancer who explodes summoned ghosts to attack.

A Cestus that revolves around high risk and high reward.

Archer Accompanied by a Falcon

A Hound that revolves around the use of the falcon.

Archer That Guides a Dog

A Hound that revolves around the use of the dog.

A Shaman that specializes in dispelling buffs and debuffs for different effects.

A Shaman that revolves around healing and buffing.

Translation thanks to Briheas on GameFAQs. 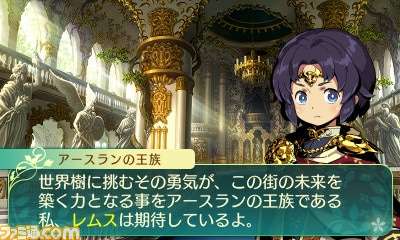 Remus of the Arcadia Council, with the above screenshot depicting a scene when it is first visited. He is a member of the royal Earthrun family.