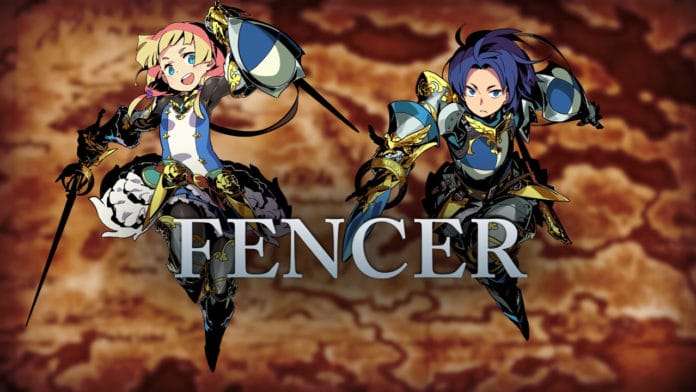 Following last week’s Etrian Odyssey V: Beyond the Myth English class trailer for the Warlock, Atlus has announced the North American release date of October 17th, and released another trailer for the Fencer.

Get ready to flex those cartography muscles again because Etrian Odyssey V: Beyond the Myth will be launching in the Americas on Oct. 17! All of the mysteries, dangers, and FOEs that inhabit the Yggdrasil tree will be revealed very soon, so make sure your calendar is clear of any distractions. The release date in Europe will be announced at a later time.

It just wouldn’t be smart to traverse the Yggdrasil tree without someone who is pretty handy with a blade, so why not have an Earthlain Fencer watch your back when exploring? The Fencer is master of both rapier and shield, and let’s just say that during fights they really like to get straight to the point. Quick on their feet, Fencers excel at evasion, stabbing, initiating defensive buffs, stabbing, chaining together attacks with other party members, and stabbing. They can further specialize in their agility by sacrificing unnecessary equipment for speed or go all in with their swordsmanship to become a whirlwind of pain.

The Fencer class’ page on the official website can be found here.

Deep Silver has also confirmed that the European release date for the game will be on November 3, 2017.