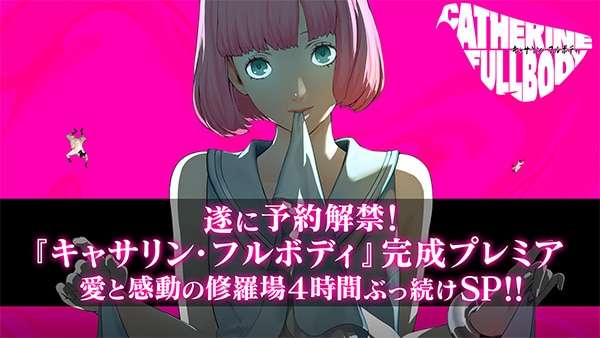 Following the release date announcement for the game, Atlus has announced a special Niconico live stream for Catherine: Full Body on September 15th.

Catherine sold more than 1 million copies worldwide, and this will be an exclusive premiere of Catherine: Full Body. It will show off the latest trailer, gameplay, and information such as a limited edition release and first-print copy bonuses.

The latest preview trailer for the game will be released.

Idols partake in the pandemonium ~ “What kind of game makes for young adult fiction!” The idol group Yumemiru Adolescence will challenge Catherine: Full Body and show off the first publicly released gameplay footage.

The live stream’s climax, the first publicly released, new information will be revealed on after the other.

A complete look at the limited version of the game will be shown, along with the contents of the game’s first-print copy bonuses.