Update (2015-09-25): Tweaks to the original translation have been made based on @ToumaRyuusuke‘s suggestions.

On September 17, Famitsu released part of the Persona 5 interview that will appear in the upcoming issue of Weekly Famitsu magazine on September 24.

The excerpt from  the interview with the game’s director, Katsura Hashino, details some information seen in the PV03 trailer—such as why the team members turn into rats—and it teases at the element of Social Links.

The translation of the excerpt is provided by Mystic from TRADUKO Soft (@MysticDistance):

Today, a new trailer for Persona 5 was released!

This trailer showcased a variety of new things, from scenes to spoken dialogue, and it is sure to have pleased fans’ expectations and imaginations. To find out even more, we decided to talk to director Katsura Hashino and ask him a few questions.

*NOTE: The full version of this interview is included in the September 24, 2015 issue of Weekly Famitsu.

Q…
First and foremost, in the new trailer for the game, a revised release window was announced for Summer 2016. Would you mind telling us a little more about why this occurred?

Hashino: I am so sorry for keeping everyone waiting, and it is inexcusable. The game itself is still the same game as it was when we talked in our previous interview after the first trailer in February of this year, and is complete for the most part. As of right now, we’re working on increasing the quality and balance of the game, as well as adjusting other things.

Thankfully, we also feel the same expectations as the people looking forward to this game. That’s why we’re carefully and steadily walking this “tightrope” every day until we reach the quality we desire. We have a clear view of the one rope that will lead us to our destination, so please wait just a bit longer.

Q…
In this new trailer, new scenes featuring characters who appeared in the first trailer were shown. Any more details about them?

Hashino: Last time I said that, “like the protagonist, the other party members also have their own problems.” To go a bit further, part of the issue is that they feel they have lost their “place.” Under those circumstances, from unexpected events they obtain [REDACTED] (Editor’s Note: This keyword will be featured in the next Weekly Famitsu). And using that, they devote themselves to helping others and reforming the world. How the protagonist forms his band of phantom thieves, how they take the world by storm, and what awaits them beyond that.

We’re hoping that the players will enjoy it as a picaresque romance that “they themselves” experience.”

Q…
In the new trailer, we were able to see a wide assortment of dungeons. From an old castle, pyramids, to art galleries and more. These all seem to be places a Phantom Thief would take from.

Hashino: This time around, the dungeons may be reminiscent of pulp (cliche/corny) fiction settings, but they’re all there because they tie into Persona 5’s theme and backdrop. (Editor’s Note: More info to come in Weekly Famitsu!)

Q…
In one of the dungeons shown in the trailer, there is a scene where the characters are transformed into rats. What is going on there?

Hashino: This is one of the status aliments that can occur in the “alternate world of the heart.” Our heroes are not intentionally transformed into rats. It can be quite dangerous when walking around in that form.

Q…
In the new trailer, we were able to see scenes of the main character walking around Shinjuku, Shibuya, and even Yongenjaya! Is this a daily depiction of his life?

Hashino: In this game, you can go to various places, with a focus on the metropolitan area. There are places where you can walk through the field and meet others as well as facilities you can use, but there are also places that become available as you form more relationships with others as well as places that you’ll visit for events.

The mini-game scenes you see in the trailer are also one of the things you can enjoy by going to certain places and how the protagonist “improves” himself.

The upcoming issue of Weekly Famitsu magazine on September 24 will feature the full version of the interview and a Persona 5 cover illustrated by character designer Shigenori Soejima.

With some of the information having already leaked such as the new character Yusuke Kitagawa and the names of Personas, the full interview with Hashino will release public information about the following details: 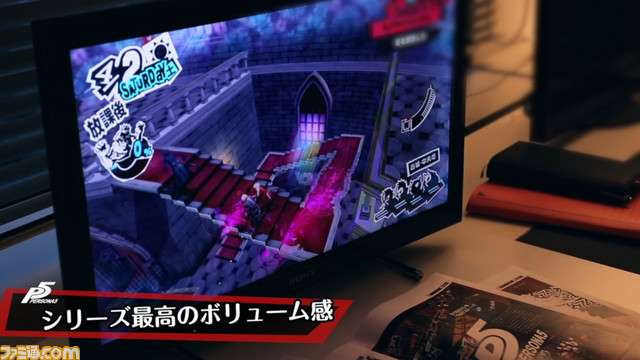 The above picture is taken from the Hashino developer interview video, and shows a glimpse of the upcoming 10-page feature for Persona 5 in front of the monitor.