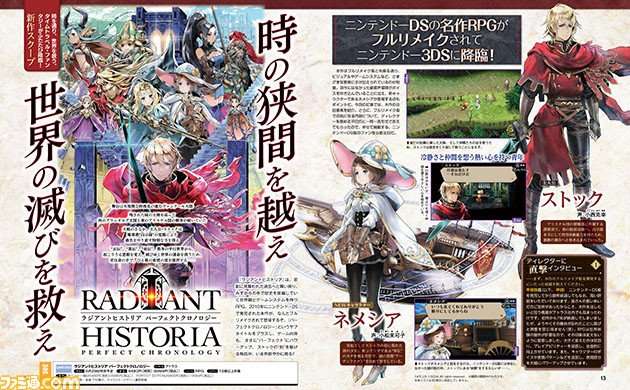 Through a Weekly Famitsu magazine leak, the first details of the recently announced Radiant Historia: Perfect Chronology Nintendo 3DS remake have been announced.

Stocke (Voice: Katsuyuki Konishi): An intelligence agent belonging to the information division of Alistel. He obtains the White Chronicle and gains the ability to move through space-time.

Nemesia (Voice: Komatsu Himeko): A mysterious girl who appears before Stocke. She is the key character to the new scenario “Akira,” travelling in search of a mysterious “artifact” substance.

How did you get the opportunity to develop a full remake of the game?

Because of everyone’s support over a long period of time, Atlus as a company began to channel the energy into wanting to publish this title, because of the world and experiences RPGs can offer. So, we kept that in mind while developing this title in order to stay true to this impression. We are revisiting the game and improving it overall.

What kind of story is the Sub-History?

Thanks to @MysticDistance and Gematsu for the translation.