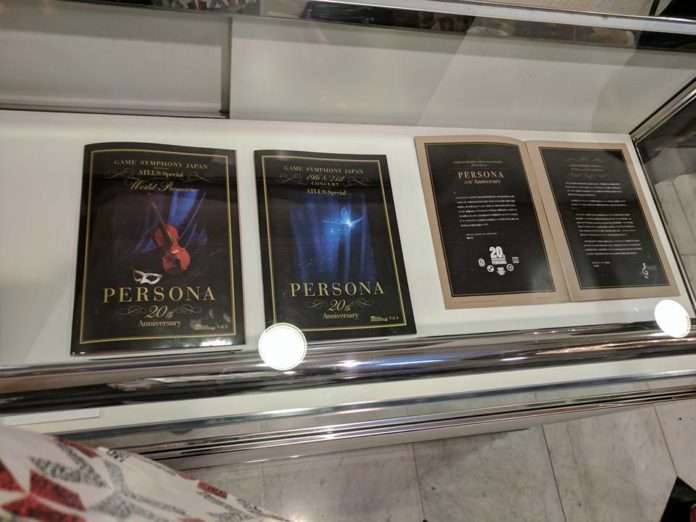 Recently I had the chance to check out the Game Symphony Japan Premium Week concert for Persona 5. This lavish event took place in a theater on the sixth floor of the Nihonbashi Mitsukoshi, an upscale department store. As everyone rushed to their seats, it was hard not to notice the sheer amount of female fans that filled the audience along with a sea of Morgana memoribilia they carried.

About a half hour after the start time, the band finally assembled with at least 20 different members on-stage before the conductor Kenichi Shimura arrived. Without so much as a word, they began to play the opening notes of the Persona 5 theme song “Wake Up, Get Up, Get Out There.” During this interlude, the Persona 5 vocalist, Lyn, triumphantly strolled onto center stage to belt out the lyrics for the song.

This first song set the tone for the entire performance, with each track flowing almost seamlessly from one to the next thanks to an amazingly well-catered set list. By far the most impressive piece was the new rendition of the Velvet Room theme, where soprano Tomoko Komiya’s voice almost overpowered the band behind her during the iconic melody.

The Tokyo Chamber Orchestra truly studied the source material here, with every song feeling loud and soulful rather than some phoned in performance. Finally, after a final performance of the theme song, the audience was let out into the cafe. All of the items offered for sale felt high quality, with the poster standing out for being on dense card stock.

Video game music is a pretty powerful component to the medium, particularly in a series so well known for its soundtrack. This could’ve been a very different show had the orchestra not cared for the material, but their dedication came through in this beautiful event. While there was a strange part toward the end where the theater had Kenichi Shimura, the conductor, try to sell the audience on their robot mascot, overall this symphony was a fabulous experience well worth the price tag.

The aforementioned robot mascot is a limited edition Persona 5 collaboration model of the artificial intelligence equipped robot called “Kibiro.” Its recorded voice is that of Persona 5‘s Futaba Sakura. More on the robot can be read about in a previous post.