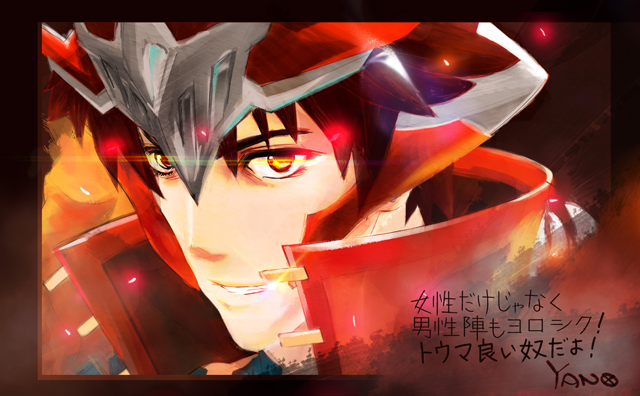 Alongside the developer interview with the Mirage art designer Hideo Minaba, another one for Genei Ibun Roku #FE has been posted featuring the Atlus art director Fumitaka Yano (who previously worked at Square Enix on games like Final Fantasy XIII and The Last Remnant).

This follows the two previous developer interviews with the chief director Mitsuru Hirata and the director/battle designer Eiji Ishida. The translation was contributed by Nintendo Everything:

Here is my late-summer greeting card.

I’m meeting you for the first time. I’m Fumitaka Yano, and I work as an art director at Atlus.

This time I’m going to discuss things that are related to art.

Nintendo and Atlus are developing #FE together. Also everything isn’t done in-house, as many people are cooperating on the project.

On the art side, prominent people are participating, like toi8-san with character designs and Minaba-san leading the people of CyDesignation with Mirage designs.

As toi8-san has talked about things like the character outlines in a previous blog, this time I’d like to introduce Minaba-san, who is responsible for designing Mirages that are like buddies for the main characters.

I got an order from director Hirata when creating the world of #FE, ‘I want to make a story in which the player is living in present-day Japan and meets by chance people that have completely different principles’, and I racked my brains in order to find a person who could express this kind of a world.

In the middle of that, a discussion came up how Minaba-san of CyDesignation is known for combining fantasy and science and how that would be just fitting for Mirage design.

Minaba-san is well-known from certain epic RPGs and he is a very busy person on top of that, so I was nervous whether he would accept to talk, but when I visited his office with a #FE project summary in my hands, he was interested and we gladly accepted to cooperate.

Now I’m going to tell you about an impressive episode of encountering Minaba-san.

I think it was on December 2013, when we had the first meeting with Minaba-san at Atlus.

Just when things related to this game’s world, protagonists and Mirages were explained, Minaba-san, who had been silent up to this point, suddenly took out a brush and created a character in a moment! It was that cool-looking Chrom. With speed that was like magic, he overwhelmed everyone who happened to be there. No – he wanted to show everyone!

Although image documents for creating 3D models were drawn again later, that influential silhouette and essence that was drawn during the meeting was entirely fixed at that early phase.

There are still Mirages that haven’t been shown to everyone, and all of them have a wonderful design, so please look forward to it.

Of course we at Atlus don’t lose to people who are cooperating with us when it comes to working hard every day. In order to show visually that characters are an active part of the show business, we elaborated a plan to produce many different stages and gorgeous costumes. If you’re a fan of Atlus, you might recognize some familiar outfits… (haha, please look forward to those, too)

The project is currently entering debugging, and all of the developers are going all out on the challenge every day. I hope you will like it.

Also many people have helped us, like Tomomi Ozaki and Hokekyo Tashiro, and I’d like discuss it in detail, but the developers’ turn is coming to an end and I’d like to return to the frontlines.

Thank you for reading until the end.

[On the greeting card/art:] It isn’t just about females, hello from the male side! Toma is a really cool guy! -Yano

— Nintendo via Nintendo Everything