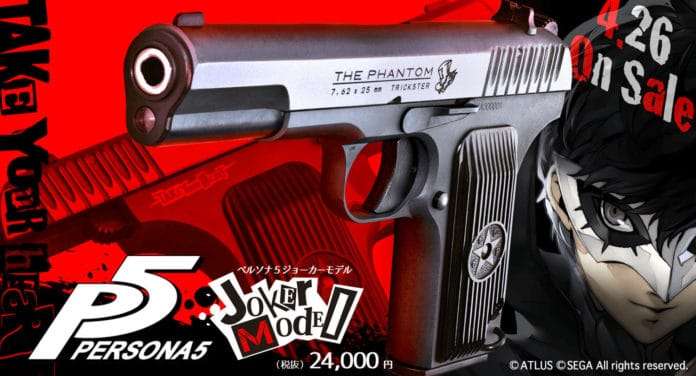 Today, the collaboration model has been revealed as the “Joker Model,” releasing on April 26, 2019.

Collaborating with Atlus / Sega and the highly popular game Persona 5, the main character’s favorite gun has been modeled as a gas blowback pistol. It’s an HW (heavyweight) model with a metallic color finish, with the trademark message of “The Phantom” beautifully engraved on the slide and frame section.

The KSC Corporation product page. As of this writing, the product is already sold out.

Modeled after the favorite gun of the main character from “Persona 5,” which attracted game fans with its gorgeous battles using demons. Using a metallic, three-dimensional parka finish combined with blast manufactured, heat-treatment coating, and a black-dyed finish, the TT33 has been transformed with a glamorous atmosphere along with a brilliant, chrome-plated barrel.

On the slide, there is an engraving reminiscent of a pre-war pistol with a massive “Phantom Thief” mark, and on the other side is the slogan “Take Your heart” engraved in a reddish-tagging style. The atmosphere akin to the 60s, where classical and pop culture intertwine, is exquisite.

In addition to the serial number, it also comes with an accessory of a mug base with a ring.