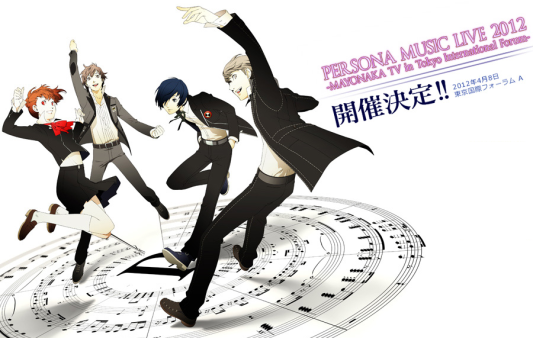 Lotus Juice, Japanese musician who has contributed to the soundtrack of the Persona series such as with Persona 3 or the Persona: Trinity Soul anime, is teasing a particular song he is writing for the Persona Music Live 2013 event on August 13th via his Facebook fan page.

And of course now we are focusing on 13th of August. Thanks to all the Persona fans all tickets have been sold out (so fast). I heard they are thinking about making more seats for those who slipped out, not great seats tho, I guess it’s better than not being able to see it live.

And I am writing lyrics for this particular song from this project as I write this. I can’t say what it is for, but all I gotta say is that ppl in this fan club will most likely look forward to hearing it.

Given that the date for this annual Persona music event would coincide with the upcoming Persona 3 anime movie releasing this fall in Japan, the song he is teasing is most likely related to Persona 3 The Movie #1: Spring of Birth.