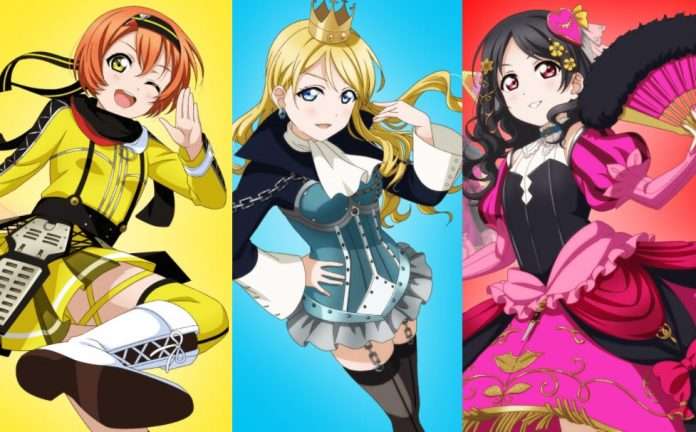 In June 2021, a collaboration was announced between  the mobile rhythm game Love Live! School Idol Festival and the Persona series.

Shown was the introduction of the character Eli Ayase wearing Elizabeth’s costume from Persona 3 (after winning a popularity poll), along with the announcement of the members of the idol group μ’s (Muse) dressed as personas as ultra rare (UR) characters in the game. The members of Aqours will also be SSR members in the game, with previously revealed persona inspired designs.

Today, the designs for the Muse idol group members as personas have been revealed, which will be used for their implementation as UR (ultra rare) members in the mobile game. 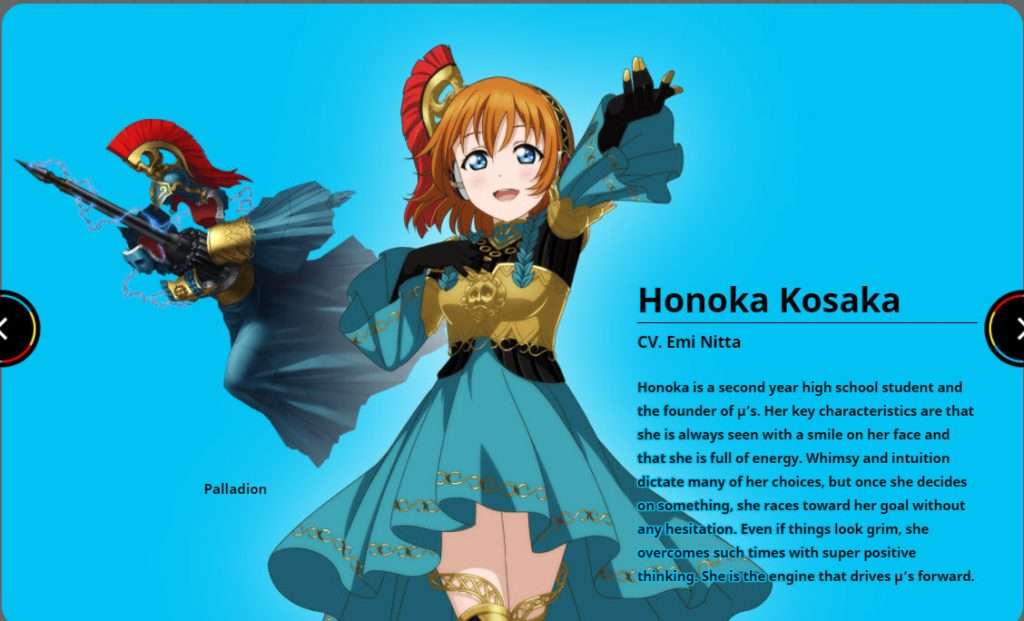 Honoka is a second year high school student and the founder of μ’s. Her key characteristics are that she is always seen with a smile on her face and that she is full of energy. Whimsy and intuition dictate many of her choices, but once she decides on something, she races toward her goal without any hesitation. Even if things look grim, she overcomes such times with super positive thinking. She is the engine that drives μ’s forward. 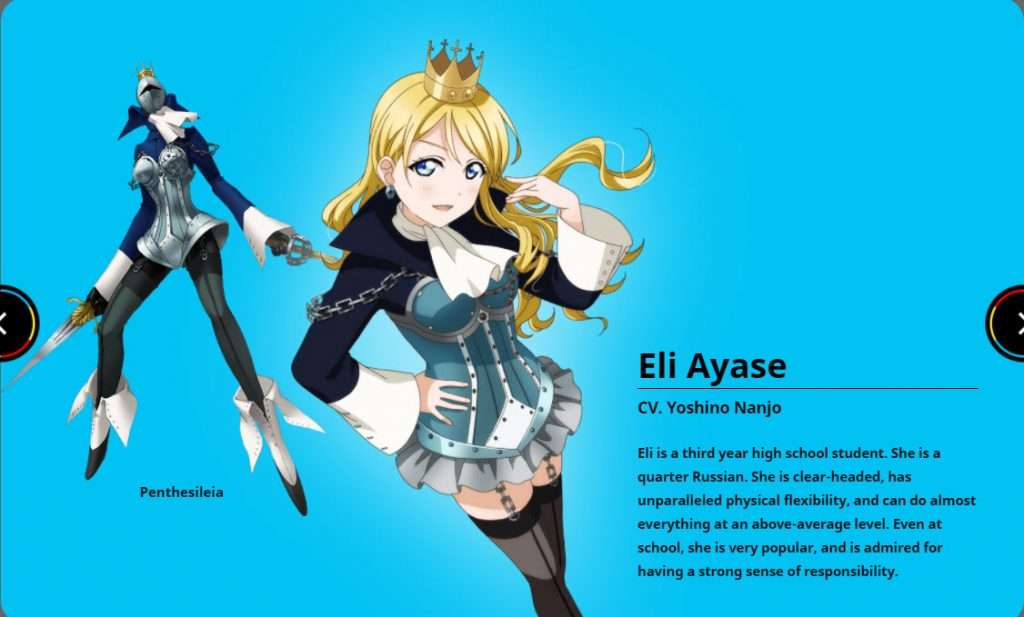 Eli is a third year high school student. She is a quarter Russian. She is clear-headed, has unparalleled physical flexibility, and can do almost everything at an above-average level. Even at school, she is very popular, and is admired for having a strong sense of responsibility. 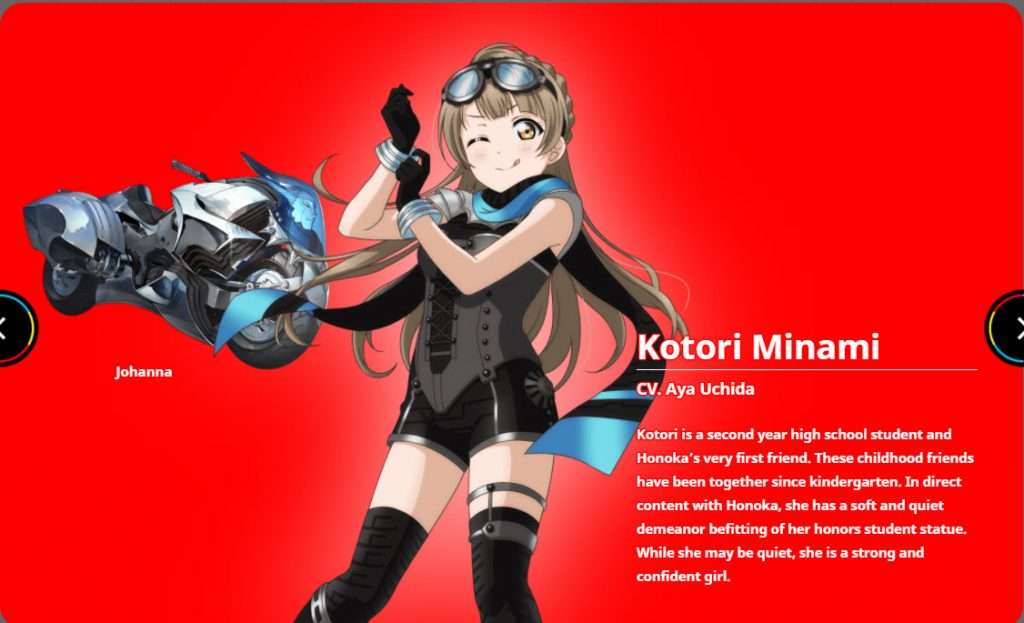 Kotori is a second year high school student and Honoka’s very first friend. These childhood friends have been together since kindergarten. In direct content with Honoka, she has a soft and quiet demeanor befitting of her honors student statue. While she may be quiet, she is a strong and confident girl. 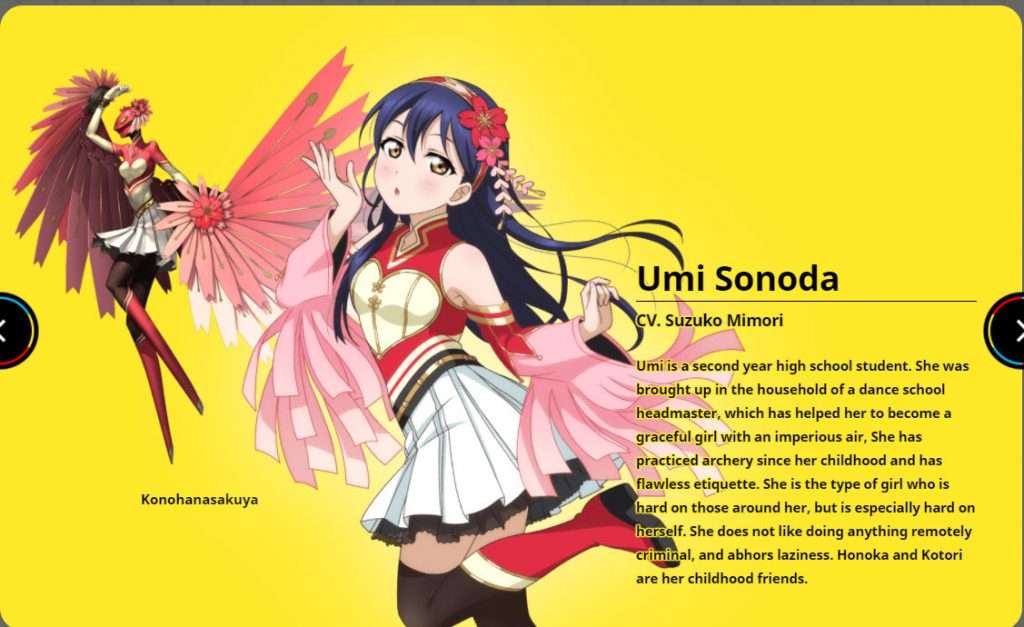 Umi is a second year high school student. She was brought up in the household of a dance school headmaster, which has helped her to become a graceful girl with an imperious air, She has practiced archery since her childhood and has flawless etiquette. She is the type of girl who is hard on those around her, but is especially hard on herself. She does not like doing anything remotely criminal, and abhors laziness. Honoka and Kotori are her childhood friends. 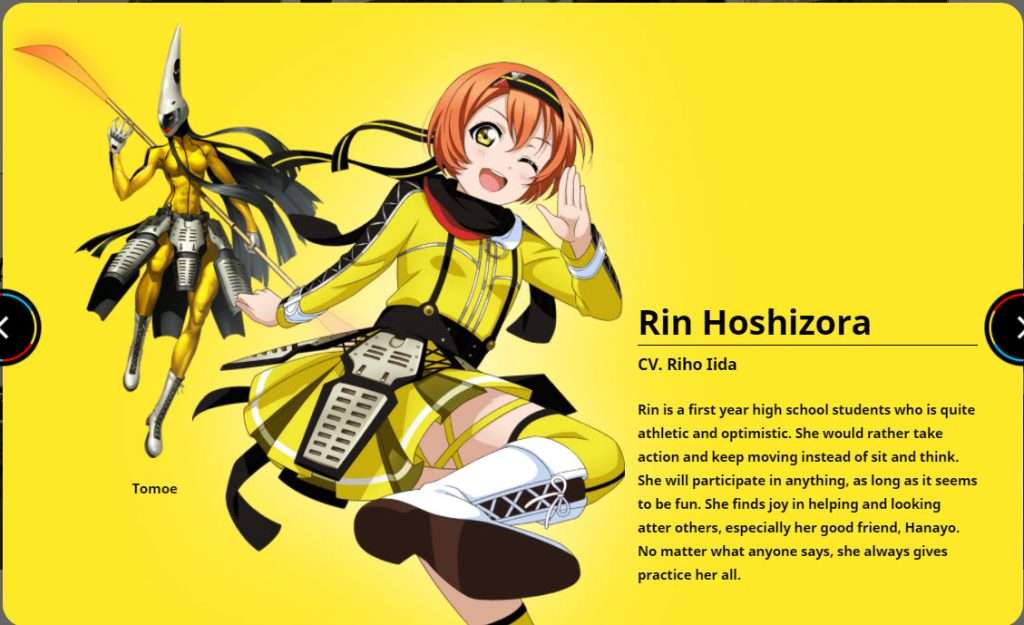 Rin is a first year high school students who is quite athletic and optimistic. She would rather take action and keep moving instead of sit and think. She will participate in anything, as long as it seems to be fun. She finds joy in helping and looking atter others, especially her good friend, Hanayo. No matter what anyone says, she always gives practice her all. 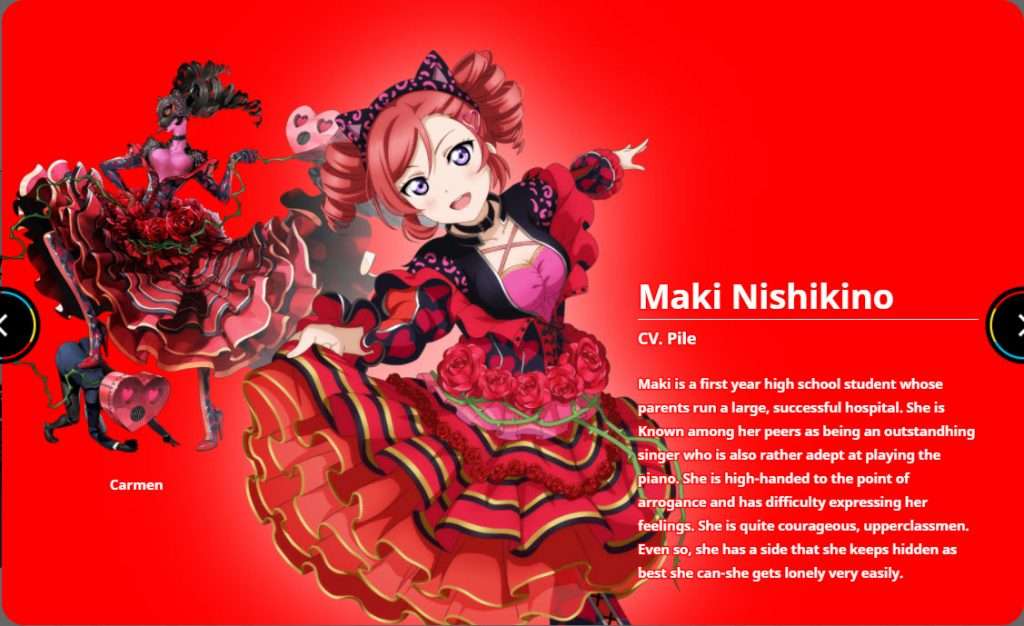 Maki is a first year high school student whose parents run a large, successful hospital. She is Known among her peers as being an outstandhing singer who is also rather adept at playing the piano. She is high-handed to the point of arrogance and has difficulty expressing her feelings. She is quite courageous, upperclassmen. Even so, she has a side that she keeps hidden as best she can-she gets lonely very easily. 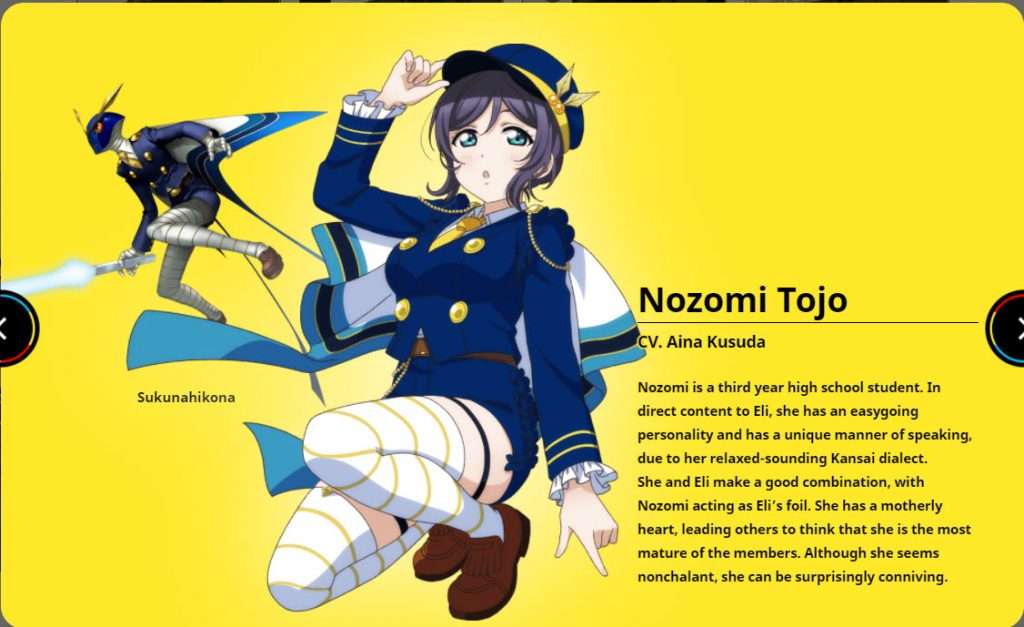 Nozomi is a third year high school student. In direct content to Eli, she has an easygoing personality and has a unique manner of speaking, due to her relaxed-sounding Kansai dialect.
She and Eli make a good combination, with Nozomi acting as Eli’s foil. She has a motherly heart, leading others to think that she is the most mature of the members. Although she seems nonchalant, she can be surprisingly conniving. 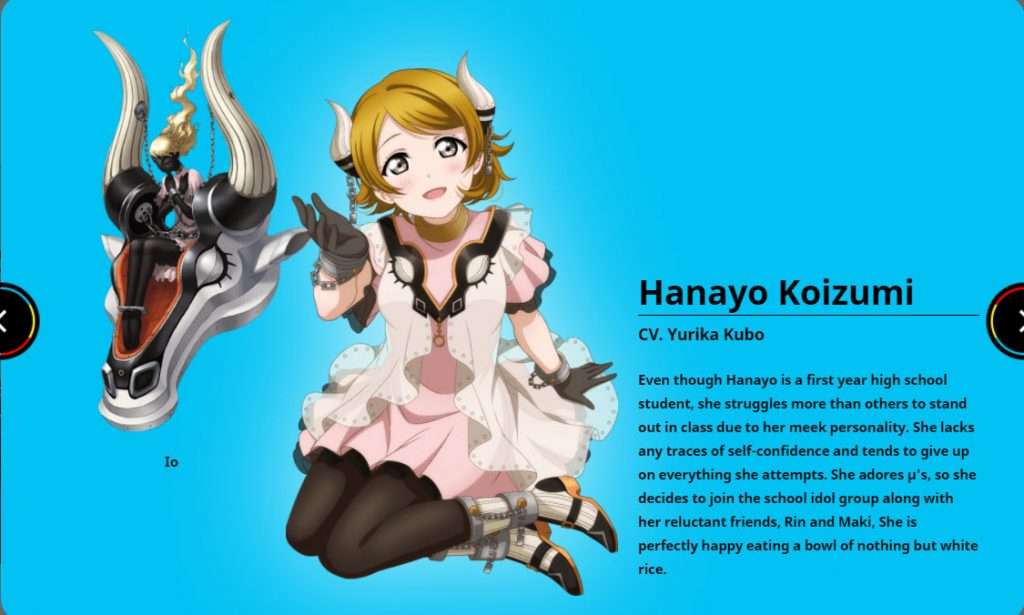 Even though Hanayo is a first year high school student, she struggles more than others to stand out in class due to her meek personality. She lacks any traces of self-confidence and tends to give up on everything she attempts. She adores μ’s, so she decides to join the school idol group along with her reluctant friends, Rin and Maki, She is perfectly happy eating a bowl of nothing but white rice. 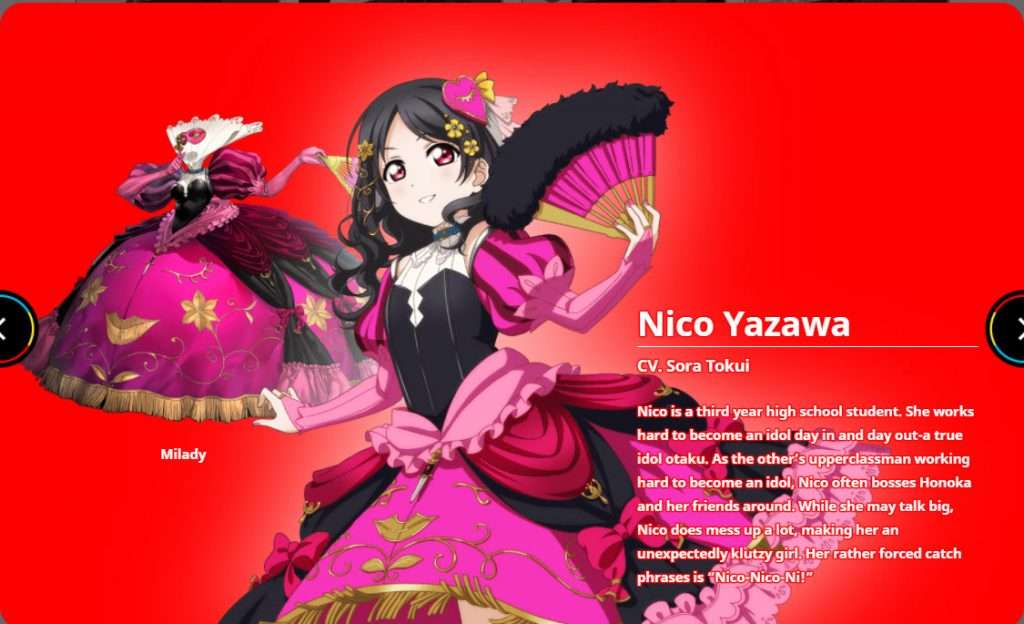 Nico is a third year high school student. She works hard to become an idol day in and day out-a true idol otaku. As the other’s upperclassman working hard to become an idol, Nico often bosses Honoka and her friends around. While she may talk big, Nico does mess up a lot, making her an unexpectedly klutzy girl. Her rather forced catch phrases is “Nico-Nico-Ni!”

Additionally, details of a pre-collaboration campaign taking place until October 30th have been announced.