Update (2021-06-02): The “New School RPG” game has been officially announced as “Monark”—as a slightly different spelling from “monarch”—along with the logo, from the latest issue of Famitsu.

Information on people involved with the project can be found blacked out on the official website, to be revealed on June 10th (corroborated with a red countdown in the background of the site). It includes the Megami Tensei series staff involved:

From the issue of Famitsu magazine #1696 is the following teaser image from the website. 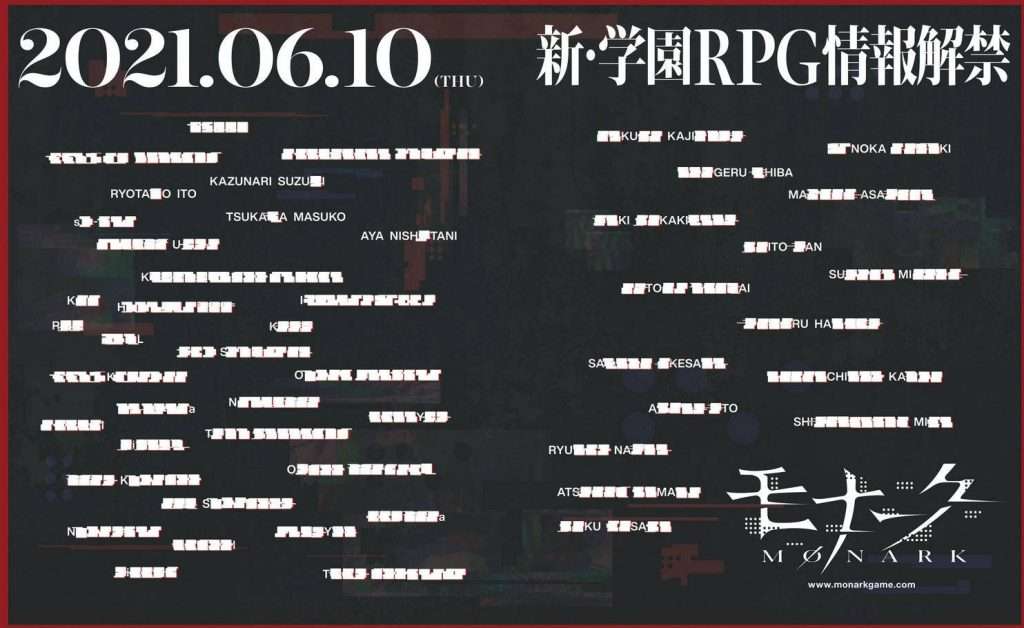 The right side represent members of the voice cast:

The top of the teaser website has a phone number: 050-3204-4961. When called, screams can be heard, followed by a voice saying: “Finally, I have been waiting for you, my foolish, silly children.”

Reputable source when it comes to Japanese video game and magazine leaks ryokutya2089 reports that a new role-playing game developed by former Megami Tensei and Shin Megami Tensei staff members will be announced next week on June 10, 2021.

Only dubbed “New School RPG (TBD)” for now as a tentative title, former SMT series creators only known by the letters S, I, M, and N are involved in this new project. Apparently, most of these developers are not currently working at Atlus.

The staff members S, I, M, N were previously responsible for both the development and the music in previous Megami Tensei titles. The publisher and developer, as well as the platforms, are all unknown as of right now.

It is also uncertain if this tease comes from the latest issue of Weekly Famitsu magazine number 1696 releasing this week, or from insider information.

This tease is reminiscent of the promotion behind The Caligula Effect, whose freelance scenario writer Tadashi Satomi was behind Persona: Revelations, the Persona 2 duology, and Digital Devil Saga. This upcoming “New School RPG” project seems to be more of an ensemble of creators who all worked on Atlus games in the past. We’ll presumably be finding out more about it next week.