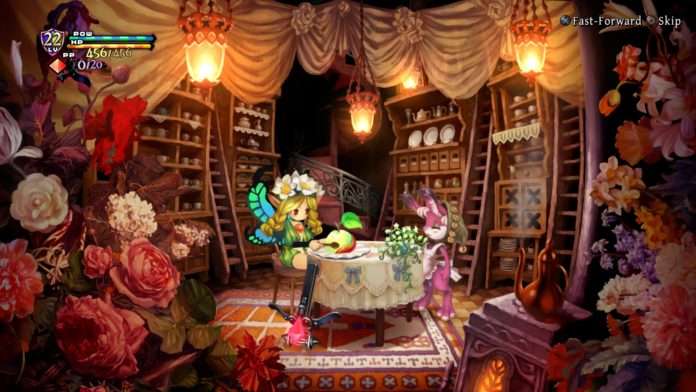 Following the English Gwendolyn character trailer for Odin Sphere Leifthrasir, Atlus has released a trailer for the alchemy and cooking mechanic.

While honing skills/abilities to be the ultimate warrior is important in Odin Sphere Leifthrasir, learning how to craft potions and cook food is just as vital.

Vanillaware has updated the alchemy feature, so players can now indulge their inner mad scientists even more than before.  In the original game, brewing potions only came down to obtaining a recipe and mixing a singular item with a liquid source of magic called a “material.” However, Leifthrasir allows the merging of existing potions with an item to create different mixtures.

Basically, brewing can be done by either combining a material and item(s), or by combining a potion with an item. You couldn’t do the latter in the original, so it adds variety to the process! In addition, potions can now be merged with each other and/or food to increase potency (which is based on a grade system), and more potion/mixing combinations have been introduced. Oh, it’s also no longer necessary to have recipes in order to create these bottles of magic. Players can figure out combinations by randomly mixing, matching, and hoping for the best.

But enough about potions. We know the star of today’s blast is the food. The developers at Vanillaware are quite the foodies, and their passion for all things gastronomic is reflected by the numerous gourmet dishes in Odin Sphere Leifthrasir. The biggest update to Odin Sphere‘s cooking mechanics are the Rest Areas players will discover during levels, complete with the renowned Pooka chef, Maury. A quick ring of the bell is all it takes to summon Maury’s Touring Restaurant and he’ll cook delectable meals…provided you have the right ingredients, of course. The divine dishes will restore HP and raise players’ experience points, so if you’re not familiar with BYOI (bring your own ingredients), you will be shortly. If that wasn’t great enough, Maury is more than willing to cook food for takeout! For those wanting a more formal dining locale, the services of the Pooka Kitchen and Rabbit Café in the Pooka Village are still available to those who would rather spend Valentinian coins on Lamb Steak and Yogurt Mousse.

Besides the changes above, adventures in Erion will still have the quintessential Odin Sphere experience of chasing down recipes, hunting for Mandragoras, planting seeds, growing food, and more!