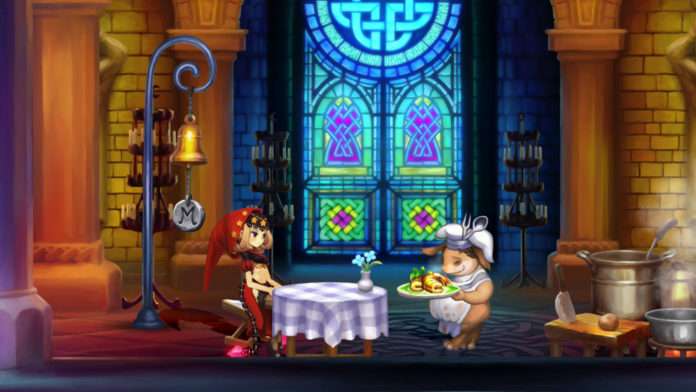 Following the previous Odin Sphere Leifthrasir character trailer for Oswald, a new English trailer has been released for the last character, the witch Velvet.

Velvet is a complicated woman who has a major role to play in the game’s events. She is the granddaughter of the mad King Valentine, princess of the destroyed kingdom Valentine, twin sister of Ingway, Demon Lord Odin’s first born, daughter of Princess Ariel, the older half-sister of Gwendolyn, and lover of the Pooka Prince, Cornelius. Are you still with us? Good. Anyways, Velvet has a deep-seated fear of her now-dead, abusive grandfather and hates her father, but, in spite of that, is a kind and determined person who would do anything for her loved ones, like Cornelius and Ingway. You’re STILL following all this right? Great. After the destruction of Valentine, Velvet flees to the Elrit Forest where she is on a quest to stop Armageddon. Unfortunately for her, the kingdoms in Erion are at war with each other, so it goes without saying that Velvet will have a date with destiny on her mission to save the world. Will her determination and skill be enough?

Of course not; destiny is rarely that complacent. Thankfully, Velvet is quite skilled with her double edged red Psypher chain, the fearsome Graveryl. Legends say that Graveryl was the very first red Psypher to be created, and was eventually given to Velvet following the death of her mother. Velvet dances and dazzles her way through trouble with great finesse, because her chains cut through enemies like a hot knife through butter. She’ll grab foes and hurl them backwards with Sling Whip, release flames that incinerate all in her path with Flare Shot (don’t forget she’s a witch too!), and create a distracting doppelganger with Mirage Mime. But wait there’s more! Her Gleipnir ultimate sure looks painful, because she unchains Graveryl for an all out high-speed assault. Ouch!