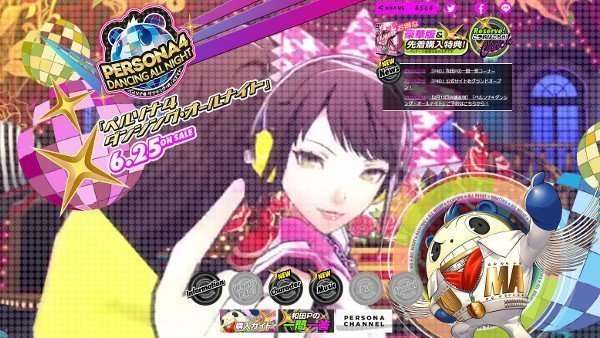 The official Persona 4: Dancing All Night website has been updated with new pages opened for the game’s music and Characters. There has also been a new Q&A interview with Kazuhisa Wada, translated by Gematsu.

The Music page on the website reveals that there will be updates made to it over time, with the song “Dance!” being highlighted as a “New Song”, with a link to its Youtube video, with a BPM of 134.5, and featuring the character Yu Narukami as that song’s “Main Character.” 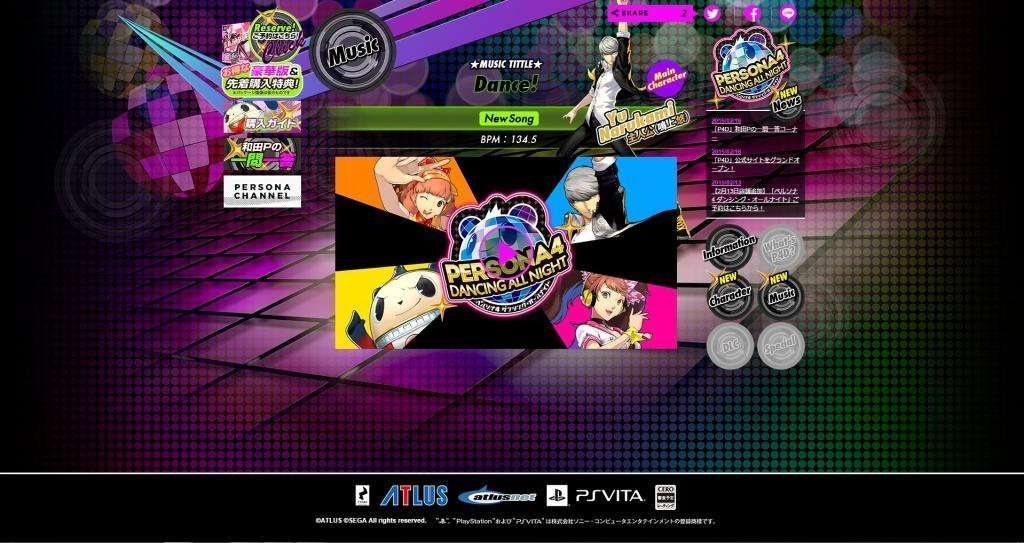 The Character page of the Persona 4: Dancing All Night website has been opened with Yu Narukami, Rise Kujikawa and Kanami Mashita character pages, revealing that there will be individual character trailers like Persona Q and Persona 4 Arena Ultimax had last year. The character pages each have descriptions and five voice clips. 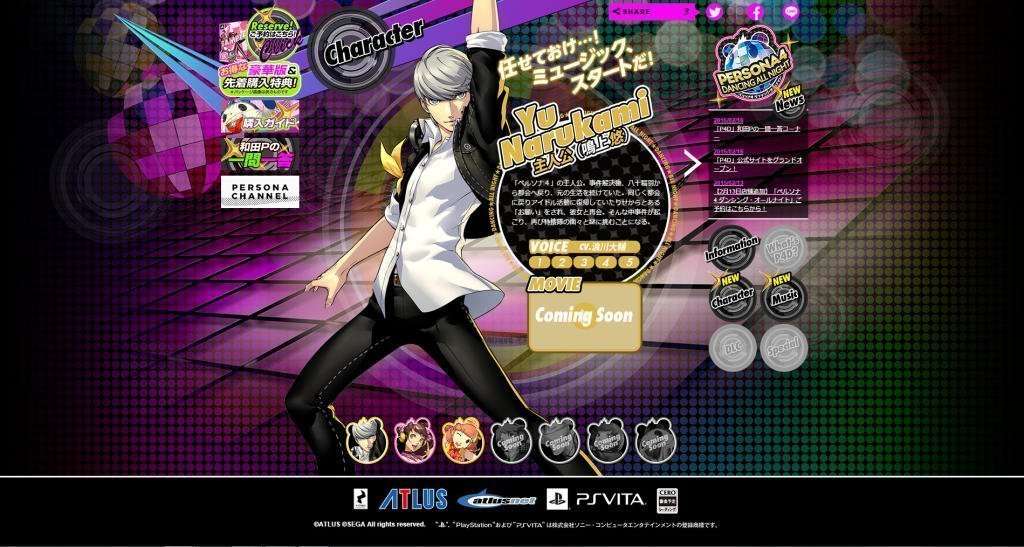 The producer and director of the game, Kazuhisa Wada, also had an extensive Q&A session for the game, of which Gematsu translated the new details:

Will there be store-specific preorder bonuses?

Those are currently in the pipeline. Once we’ve hashed everything out, we’ll officially announce what’s up, so hold on until then!

Will there be a downloadable version of the game available?

Will the soundtrack ever be sold separately?

We’re not ready to announce a release date at this stage, but of course we intend to make it available separately. However, those who are especially keen on getting the game would be wise to pick up a special edition since obviously it’ll be cheaper overall to get the soundtrack that way than on its own later on down the line.

Will you release a demo version of the game?

We don’t intend to do so, although we will have demo stations set up [in Japan] where people can check the game out ahead of release and get a feel for it.

What kind of music game is Dancing All Night?

It’s hard to explain it well just in writing like this, but essentially notes come out from the center of the screen and when they overlap one of six areas on the screen, that’s when you hit either a face button or a direction on the d-pad in time to the music. There are other twists layered onto that formula like multi-button presses, held notes, and something we’re calling “Scratch,” as well. Oh, it’s worth noting that the game does support touch controls. [As a later question clarifies later however, the game is PlayStation TV compatible.] I can’t get into overtly specific comparisons for, ah, let’s call them “adult reasons,” but the gameplay is not unlike that one arcade game, the one whose cabinets look like washing machines. That being said, we plan to upload tutorials and gameplay movies as time goes on to further clarify how the game is played.

Is the difficulty level fixed for each song or can you pick what level to play for each one?

Each song in the game has four difficulty levels, Easy, Normal, Hard, and All Night. That being said, even within the same overall difficulty level, there is some level of variation between songs in terms of how easily they can be cleared. Nevertheless, we’ve designed Easy mode in particular to be approachable to people who are either new to rhythm games or just aren’t good at them in general. We’ve also made it so that there are additional settings you can turn on during the story mode to make the game easier, should that be necessary, so don’t worry about whether the game will be too much for you to handle! And we’re not leaving advanced players behind, either; we’re balancing it to ensure they can have a fun time, too!

Would you classify Dancing All Night as a story-driven music game, rather than just a pure music game?

Correct. Chronologically, the game takes place after Persona 4 Golden‘s epilogue. We’ll talk more later about why some things might appear to be surprising reversions sometime later down the line.

Does every character have multiple costumes?

Of course! We’re whipping up lots of them right now as we speak. We’ll talk more about specifics at a later date, so look forward to that!

Will there be DLC for songs and costumes?

It’s our intention to put out such content, although right now we’re still busy just getting the main game out the door. Once we start hearing from other people what they think of the game, that’s when we’ll start having a solid idea of what we want to do.

Will there be a jukebox mode in the game?

Yes, we’re working on that.

Will we be able to play the songs outside of the story mode?

Yes, you’ll be able to do that in the Free Dance mode and you can unlock additional songs by playing it.

Will there be extra bonuses for full combos and other sorts of achievements in the game?

There will be. That’s another thing we’re hard at work on right now.

What’s Nanako’s place in the game? Is she the mascot?

She actually plays an important role in the storyline and will dance in it, but won’t otherwise participate in any battles.

Is the protagonist’s name officially Yu Narukami in the game?

It is and it’s going to be locked to that. I know everyone has their own idea of who the Persona 4 protagonist is in their heads, but if you look at it as just another unique spin on that character, I think you’ll find a lot to enjoy about him here.

Will the game have PlayStation TV support?

Will Hanako Ohtani dance in the game?

Additionally, the Persona 4: Dancing All Night song Pursuing My True Self (Atlus Kozuka Remix), included with the Persora: The Golden Best 2 concept album, has been uploaded: