Home Atlus Series Persona Official Persona 5 Crow Artwork Was Probably Not Supposed to Have Been... 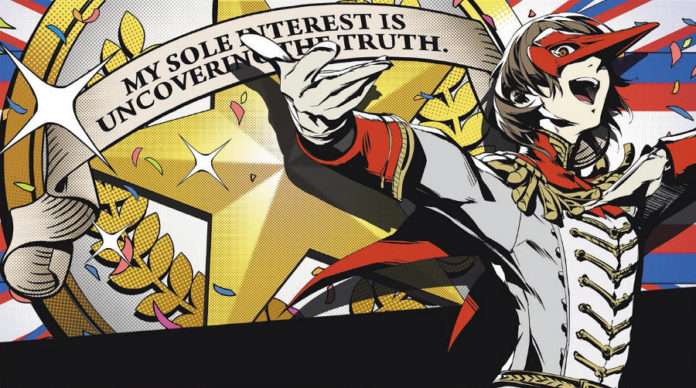 It seems that the first look at official promotional art for Persona 5‘s Goro Akechi in his Phantom Thief form uncovered days ago might not have been meant to be released yet, going by certain updates to its source.

On March 14th, it was discovered through datamining that the “Persona O.A.” smartphone app would release, in the near future, a wallpaper which featured new, official artwork for Goro Akechi as “Crow.” 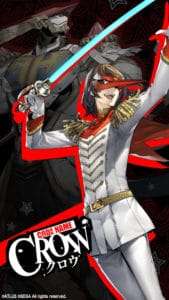 This art was notable, as it was the first time Phantom Thief promotional artwork in the style of the other characters’ had been released for Goro Akechi.

Hours later, it was officially announced by the Persona 5 anime Twitter account that this artwork was now included in an update celebrating White Day in Japan, along with other Phantom Thief renders for the male characters: 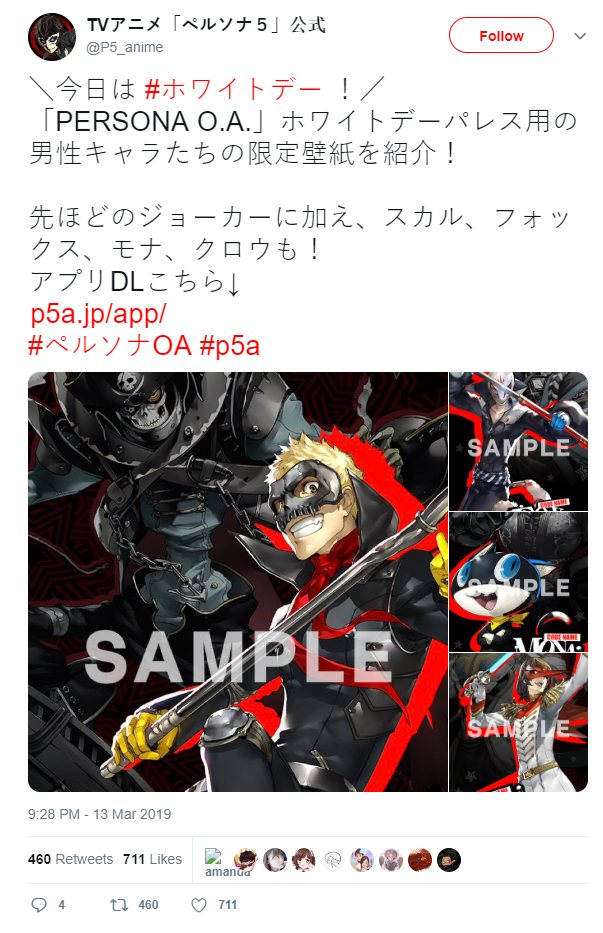 People were able to unlock the Crow wallpaper through Persona O.A. for a short while and use it. However, less than 24 hours later, the above tweet was deleted and a news message—only available in the app—was added on March 15, 2019 at 12:36 PM JST.

The message stated that the team was aware of a problem where, when the required path was cleared, the “White’s Day CROW” wallpaper would not be added to the list of purchasable wallpapers. As a result, the wallpaper was completely removed, and the team apologized for the inconvenience, asking users to wait until the problem was resolved.

No updates were made on this front, until March 24 when a Persona O.A. maintenance update was announced on Twitter for March 26. This maintenance update added the previously datamined wallpapers featuring Sae Niijima from the cover of Persona 5 the Animation Volume 10.

Finally, an update was made to the app today with different Crow art,  this time from his “All-Out Attack” illustration in Persona 5. This one can be unlocked without meeting any prerequisites. 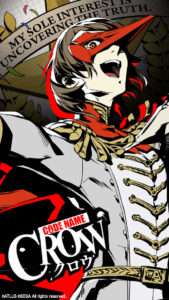 This new image has completely replaced the old one, bearing the file name of “White’s Day CROW.”

In the news message released on March 28, 2019 at 10 AM JST, the team states that “the design specification has been changed because there was a misunderstanding with the wallpaper design of White’s Day CROW.”

As an apology for changing the design and changing the requirements to unlock it, 200 Persona Points (in-app currency) will be distributed to users between March 29 and April 26.

It’s a curious series of events, leading me to believe that the initially released artwork of Crow might have been a mistake.

There is the possibility that the new Crow art was meant to be new promotional artwork for the upcoming Persona 5 The Royal, mistakenly provided through Persona O.A. before it was supposed to be.

There is also the fact that the first released artwork for Crow showed him as right handed, when he is left handed.