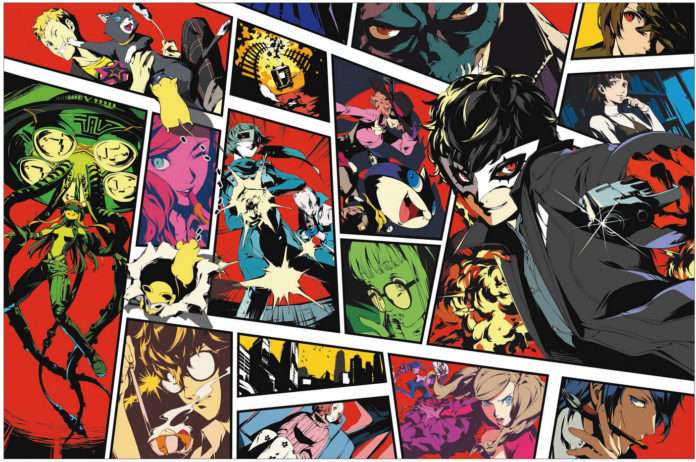 The first Soejima Artworks collection was released in December 2011, including illustrations from 2004 to 2010.

The 2010-2017 collection includes two lengthy interviews: one featuring P-Studio’s “Art Unit,” and the other exclusively featuring Soejima. This post will focus on the former—originally conducted in December 20, 2017—with another to come for Soejima’s in the near future.

This is Soejima-san’s collection, and he is joined by the P-STUDIO Art Unit (henceforth referred to as “Art Unit”), whose works have been collated for the first time. Let’s start by introducing three of its members.

This book contains two interviews; this one concerns the Art Unit, while the other is focused on Soejima-san. The readers are very eager to know about the work and the people involved, and we’re excited to interview you.

All: Thank you for having us.

Soejima: This interview is for [the other three], but since I’m already here, I’ll be joining in. (laughs)

You’re not allowed. (laughs) Let’s get right to it. Soejima-san, since you’re working with the P-Studio Art Unit, could you tell us about it?

Soejima: We’re the division of Atlus that works on the Persona series. And the Art Unit is responsible for the illustrations you see in publishing and packaging, character design, and 2D design. We also supervise animation and visuals when requested by other departments.

So in essence, the Art Unit’s work is centered around Persona?

Oribe: That’s true, but we’ve worked on games like Catherine, as well.

And you’re a member of the Art Unit, Soejima-san?

Soejima: Yes, but my situation is different. I collaborate with the Art Unit, but because I have other work besides Persona, I operate independently.

Oribe: The three of us work on the 2D illustrations for Persona, with Soejima-san leading us. The book’s title has “P-Studio Art Unit” written on it, but we’re not called that generally. Within P-Studio, we’re just the 2D/Art Department.