In February 2019, CGWORLD published an article exploring the production process behind the opening animation for Persona 3: Dancing in Moonlight and Persona 5: Dancing in Starlight.

Below is a complete translation of the second part of this two-part feature. The first part can be read here.

We’ve been introduced to domerica, the studio in charge of the opening sequences for Persona 3: Dancing in Moonlight (P3D) and Persona 5: Dancing in Starlight (P5D). Now, let us examine the movies themselves.

The opening movie of P3D was created with beauty and style in mind. The foam bubbles during the beginning introduce its first theme: the underwater world. The special effects ensure that this theme remains consistent. Furthermore, since they were using effects alongside CG, they tended to have numerous layers in their files. Because of this, the staff had to pay attention to what those layers contained.

“Usually we assign colors to objects we’d want in other layers,” says CG artist Aoi Kanehira. “It looks organized that way, and we keep the file size small.” Additionally, the artists and animators can request to remove some objects or effects altogether. Since the majority of the opening is worked on by the studio itself, the staff can easily address concerns that arise with one another, and it is their hope that they complete the project, even when some resources have to be removed.

“We’re honored to be making something for the Persona series, and that inspires us to make something worthy of it,” says [Kazuya] Ichikawa. We can already see that they’ve been devoted to this project for a while.

In the case of P3D, the storyboard was a rough sequence of the movie. Finer details in elements like choreography were not given much attention. The blue color scheme is taken from the original game, and other concepts running through the opening include “lineart”, “techno music”, “mirror surfaces”, and “submersion.” There were fewer restrictions in creating this opening than in other projects.

Scenes taken from the opening. The overall feel of the movie was kept consistent by combining the blue color scheme with art that was frequently drawn to reflect itself. 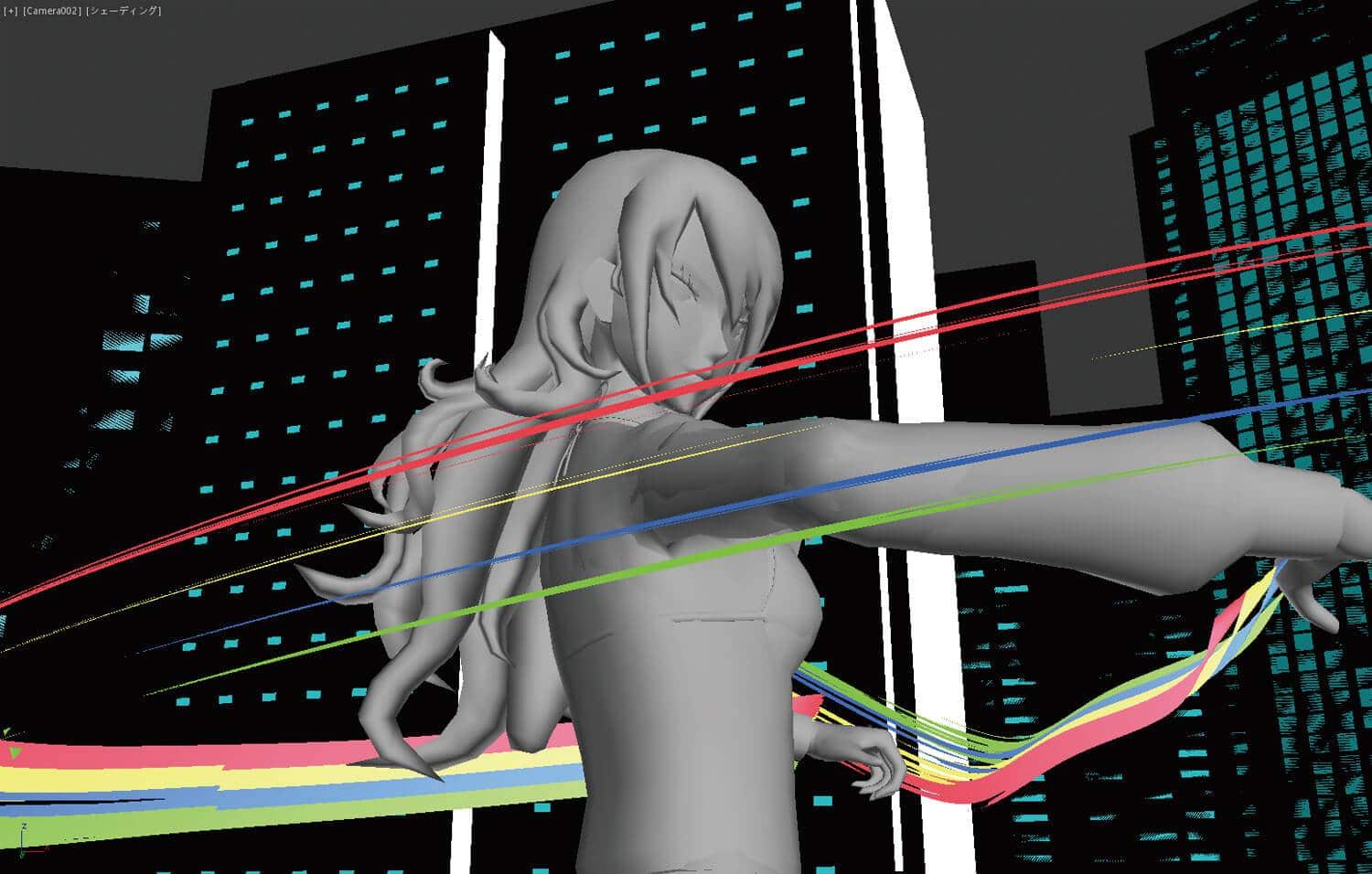 A finalized draft of Mitsuru in the opening, as seen in 3ds Max. The colored lines for the rainbow were added with CG. 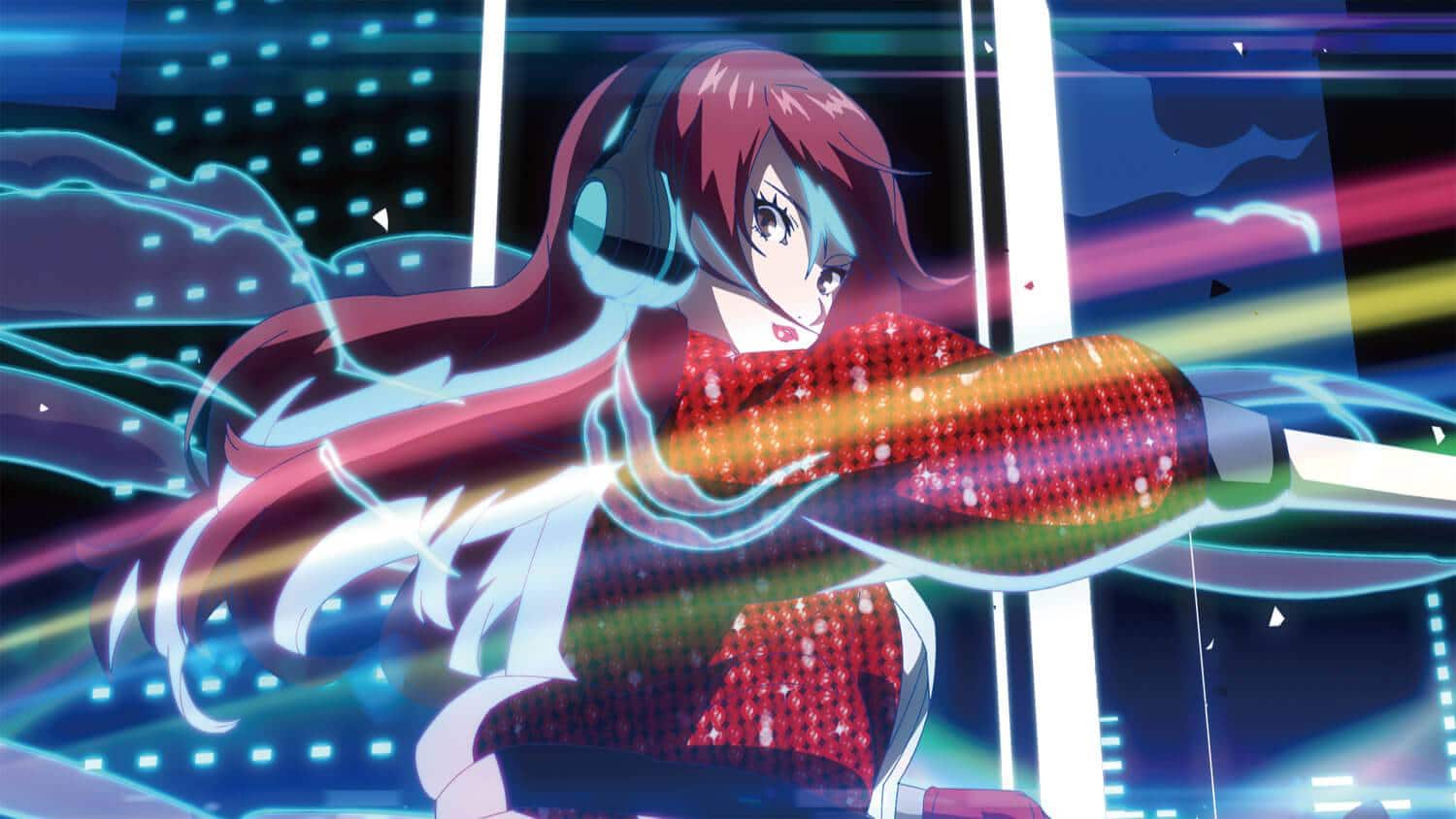 The complete image, created with photo editing tools. The rainbows follow the characters as they dance, and the use of CG gives it an enchanting feeling.

Staff Favorite! A Protagonist and His Signature Move

The director [Arisa] Matsuura’s favorite scene from the opening is the one where the protagonist aims at his head as he dances. This signature gesture was incorporated into the opening to remind us that the dancing games are still part of the Persona franchise. Matsuura says, “With the addition of this key gesture from “Persona 3,” alongside both the space and visual effects used, we understand that we are looking at the world of Persona 3.”

Creating a World Through Compositing

Compositing was used to bring in elements from the original game. An example here is the opening shot of the protagonist climbing up the stairs. 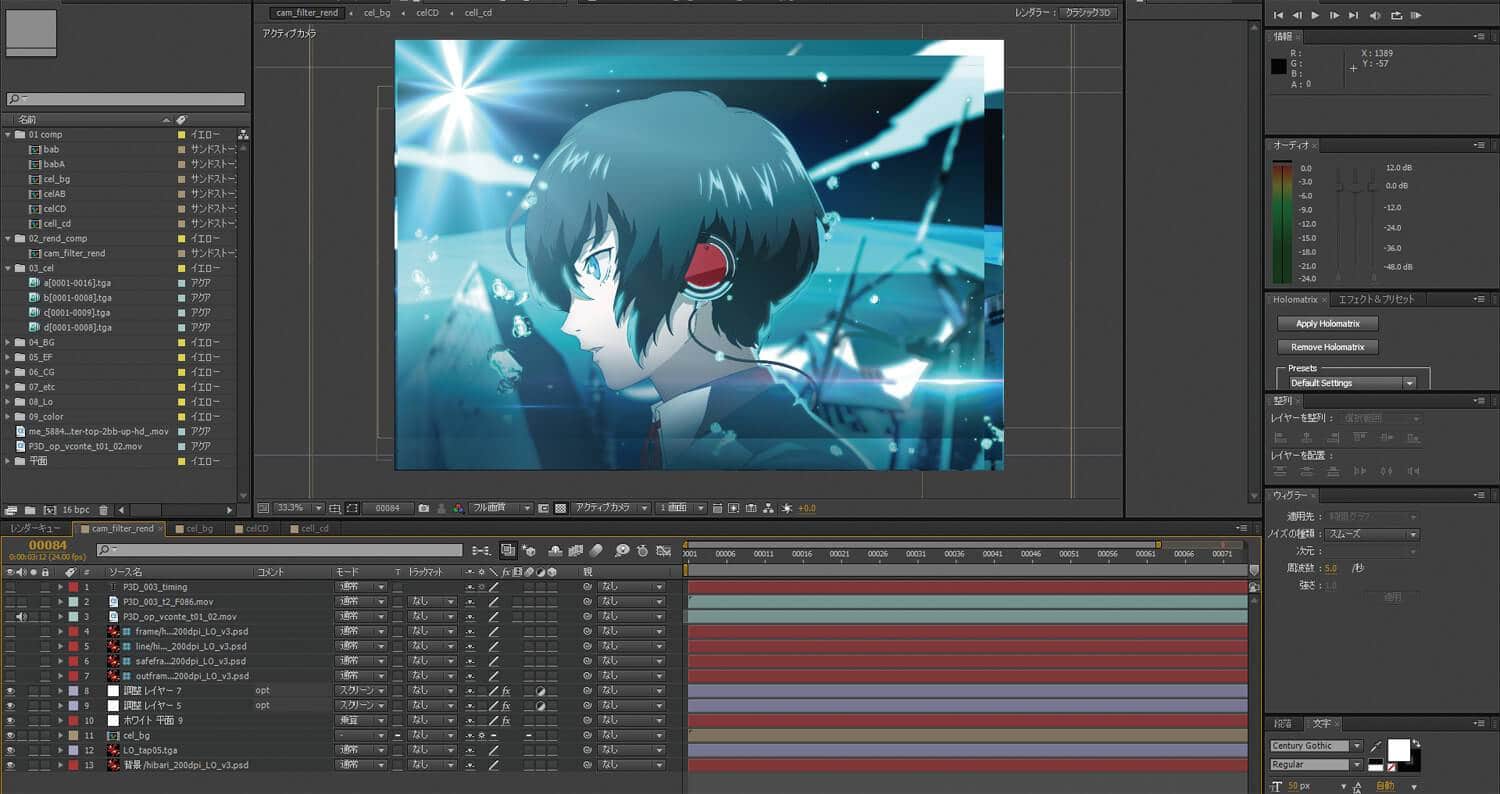 The interface of After Effects. Compositor Mayumi Kamada says, “This shot was a very memorable one for me. We had processed it the way we normally do, but during the quality check, Ichikawa-san told us to give it a more submerged feel. I had to learn how to provide that effect through trial and error.” In the end, discernable visual effects were necessary to show the underwater theme of the opening. It was a sequence, Kamada adds, that gave her an opportunity to polish her skill set.