Following P3D, P5D’s opening movie is comparatively vivid. The black that contrasts with the imagery is a character in itself. The movie depicts the characters as outlaws, linked to the picaresque romance style of the original game.

“Haru Okumura and Futaba Sakura dance together at the beginning of the OP, and there’s a part where Futaba strikes Haru’s rear that was popular with Atlus!” says Matsuura. This demonstrates how well the characters’ personalities are portrayed in the short amount of runtime the movie has.

Kamada adds, “Our top priority was to keep as close to the original game as possible. Ichikawa-san always asked us to make it better, and we strove to do just that. We’re more like “creators” than “operators” here in domerica, with a corporate culture that utilizes each staff member’s strengths in the project.”

The openings in both games are barely two minutes long, but the creators each had their part to contribute, and they went through trial and error to achieve their best work. It’s as if it was all created within domerica’s own “Dark Hour.”

The concepts behind P5D are “street”, “subway”, “retro”, “records”, and “graffiti,” which were combined to depict outlaws in the city. The original Persona 5‘s red was chosen as the theme color. By taking their original games’ pop imagery, using their motifs, and adding an original “petal scatter” effect to the movies, the Dancing games were able remain united with the Persona series, despite the very different content from the original games.

Shots taken from the movie, all sharing the red theme color. The equalizer bars on the buildings were created with After Effects, and they were designed to synchronize with the music. CG designer Yuuki Iida explains, “We like to plan the scenes beforehand using CG, so we know where to add effects.” As with P3D, this technique has become a reliable tool.

There is a cut where the protagonist dances and walks to the left for around ten seconds. The staff was unanimous in naming this scene a highlight. And, according to them, they struggled to get it right.

Since the motion capture for this game’s opening was almost entirely used for dance moves, there was none for walking. Ultimately, they cut off the walking movements from the dances, and linked those together. Kanehira says, “We used After Effects to adjust the protagonist’s feet, and connect the movements to make the scene as seamless as possible. It was quite the task.”

New keyframes were added for better transitions, and inbetweening was done in more difficult gaps.

CG animatics of the frames, in order. 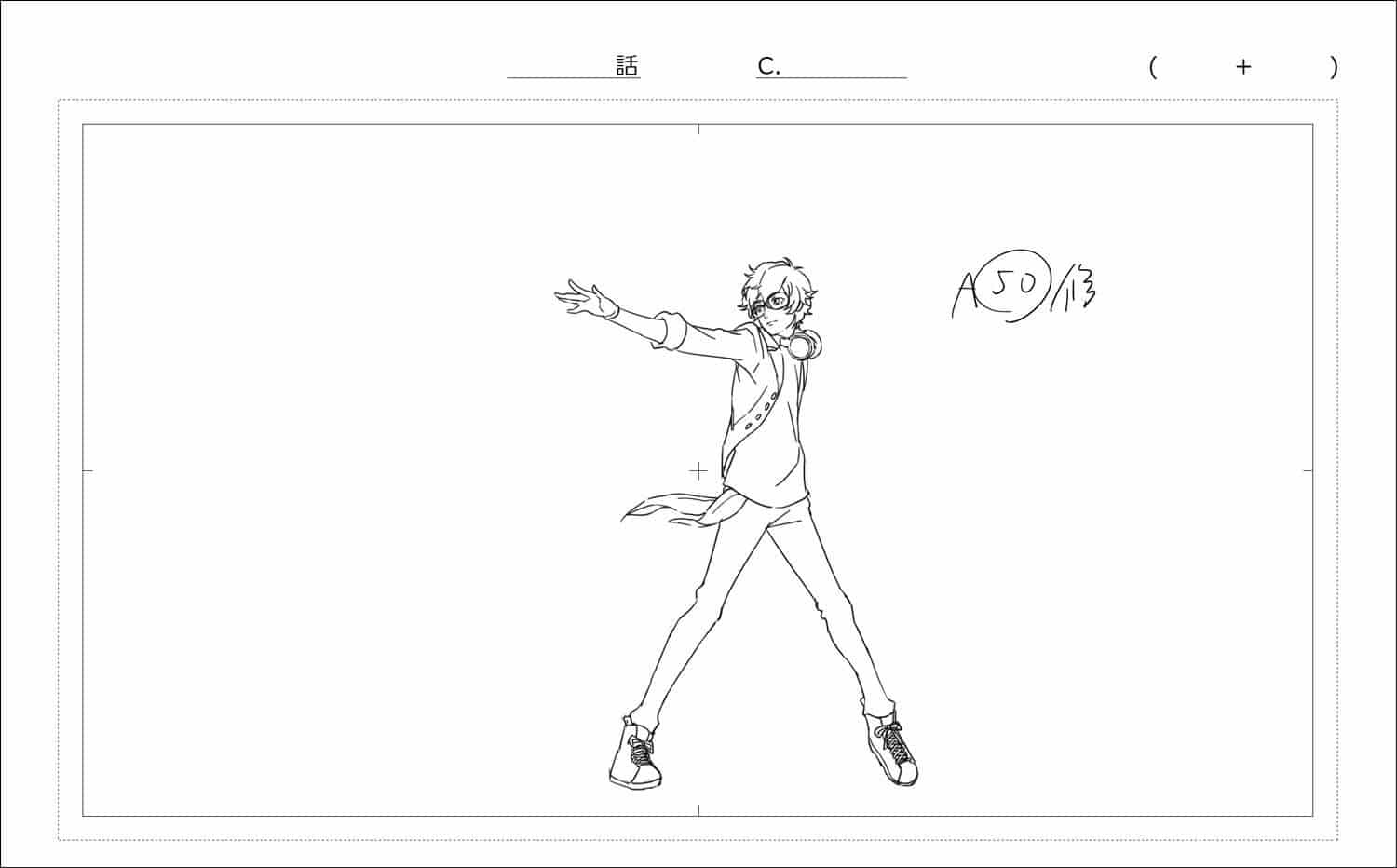 Initial keyframe. The pose was redrawn from its original CG, and will be refined to look more stylish with animation. 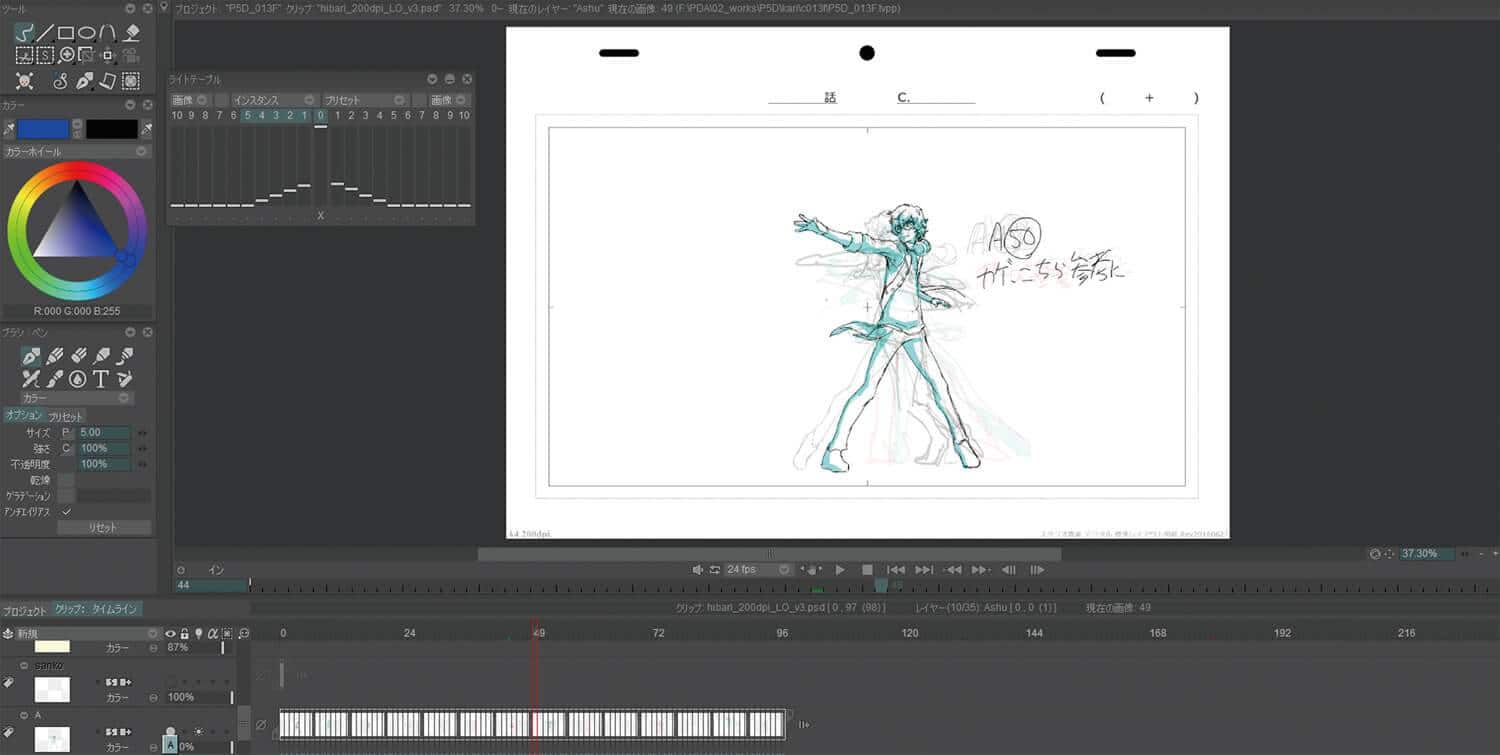 The interface of TVPaint Animation. The preview feature allows for editing a frame while viewing the previous and following frames. This software lets the staff work on this 10-second sequence without encountering issues. 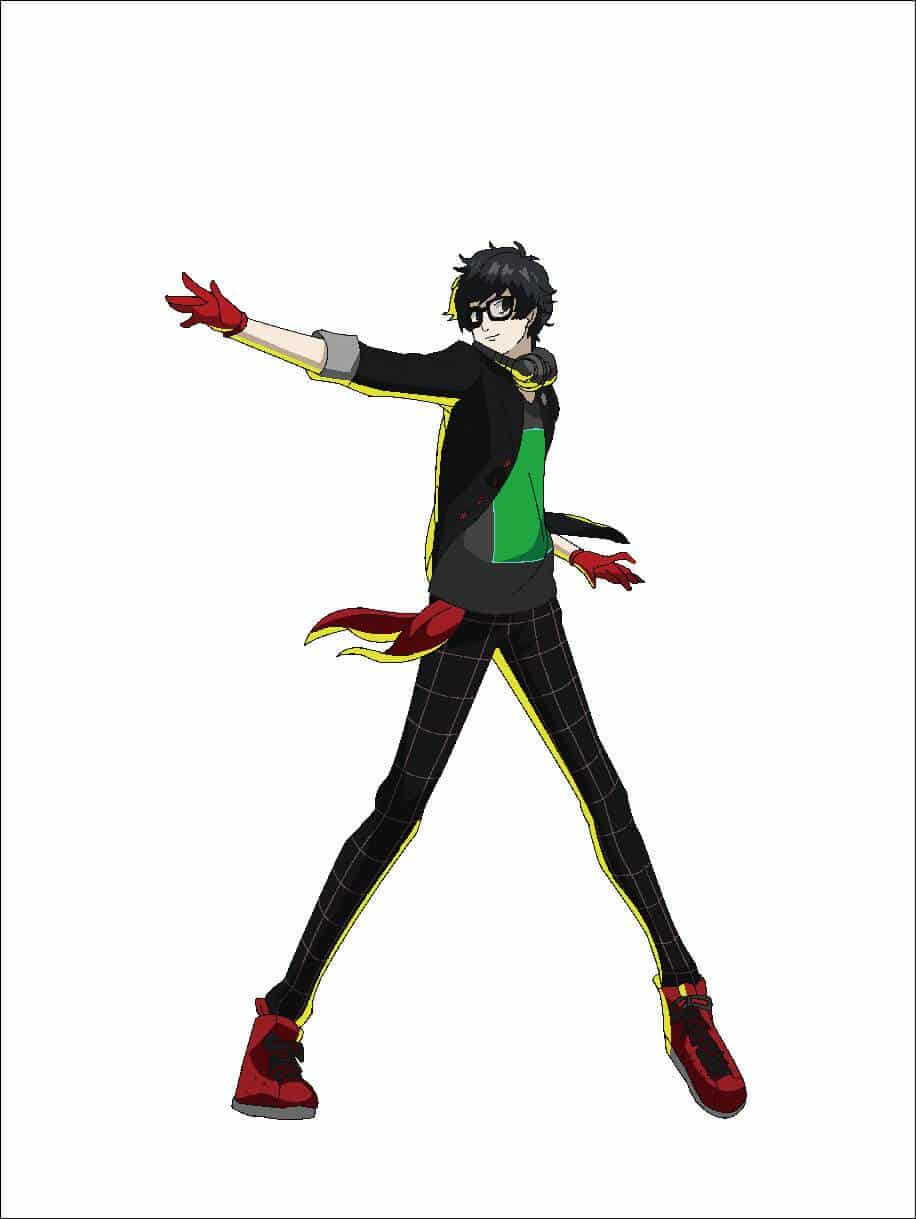 A celluloid. The protagonist’s legs were actually lengthened for this scene, and these proportions had to be painstakingly maintained for the considerable amount of cuts.

Final picture. Shots of the memorable scene, completed through the efforts of the dedicated staff.

Creating a World Through Compositing

P5D did not use an image board, so visuals were adjusted during the editing stage. First, each cut is connected into a single scene, with the entire balance in mind. Then the cuts are processed so that the shades of red used are suitable for each cut. The end results (right) can be compared to the original (left).

Before (left) and after processing (right). A “sharp red” is used to evoke a street vibe.

Before (left) and after processing (right). Red is used to add noise to the shot, giving a retro vibe.

Before (left) and after processing (right).  It features a disco ball. Because the shot had been pre-drawn with CG, light could be designed to reflect onto the background models realistically. The animation was submitted around this time, as well.