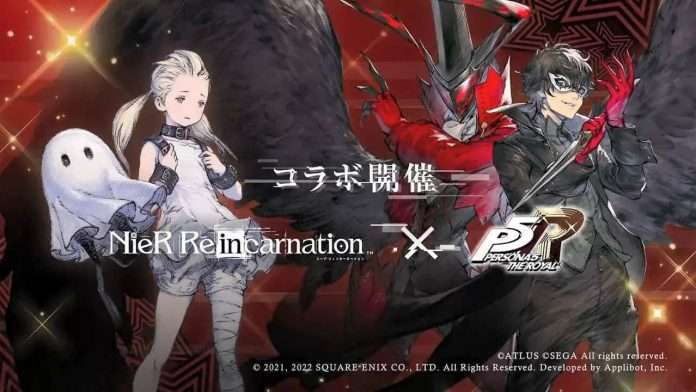 During the 11th live stream of the official Nier Reincarnation today, a new collaboration featuring the mobile game with Persona 5 Royal was announced by Square Enix and developer Applibot.

As part of the collaboration, Joker and Queen (Makoto Niijima) will be available as pickups. There will also be a collaboration quest called “Record: Phantom of the Rebellion” ending on October 13th, where the character Fox (Yusuke Kitagawa) will be available, alongside the limited weapon “katana.” The scenario of this quest involves both the Phantom Thieves and the characters from Nier Reincarnation.

During the live stream, scenario writer Yuki Wada discussed the collaboration’s story. Wada has played Persona 5 Royal himself, and stated that it was an honor to collaborate with a game he’s played and a popular one at that. He’s looking forward to the collaboration from the user’s point of view, right from the planning stage.

The usual collaboration scenario focuses on the guest characters collaborating, but this time it’s a cross scenario between Nier Reincarnation, one that could only come out of this collaboration, where both of the IP are involved.

The female high school student who appears in the collaboration announcement trailer appears as a side character in Nier Reincarnation. This is a character not yet implemented in the gacha component, and has not appeared the event scenario. Since this will be the first she appears in, Wada wants users to look forward to digging deeper into the character.