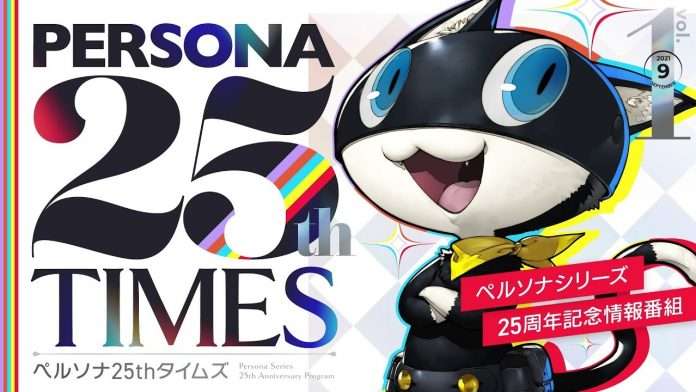 Update (2021-10-21): Added information for the second showing of the Persona 25th Anniversary Symphonic Concert in December 2021.

Following the tease of the year-long Persona 25th anniversary events in July, along with the launch of the anniversary merchandise special website, Atlus has announced more information regarding the upcoming projects.

Today, the 20th of September, 2021, marks the 25th anniversary of the Persona series since the release of the first game on September 20, 1996. To celebrate, the first volume in the regular program called “Persona 25th Times” was launched, featuring Morgana as the brand ambassador as he announces the latest information.

In this episode, the following new information was announced:

There were also recaps of previously released information, such as the ongoing downloadable sale for the Persona series and the commemorative artwork for the 5th anniversary of Persona 5.

The first “project” among the seven that the 25th anniversary events will consist of. English captions are available for the video.

Many famous songs from the Persona series will be revisited with orchestral arrangements.

To celebrate the 20th anniversary of Persona, the  Game Symphony Japan Premium Week concert for Persona 5 took place in March 2017.

Update: Due to enthusiastic demand from fans, it has been announced that an additional performance for the Persona 25th Anniversary Symphonic Concert will be held on December 12, 2021 at the Sumida Triphony Hall.

As with the first performance in November, two performances will be held on December 12th: one during the day starting at 13:30 JST, the other at night at 18:00 JST.

To commemorate the 25th anniversary of the Persona series, all previously released anime will be broadcast simultaneously on Japanese streaming services. The list of anime is the following:

They will be available on Amazon Prime Video, Hulu, Abema TV, and other streaming services detailed on the news post.

The anime series will be broadcast for free every week on Abema, starting with Persona 3 the Movie #1 on September 20th, until Persona 5 the Animation episodes 14 to 26 on November 8, 2021.

Details for the Sega and Atlus presence during this year’s Tokyo Game Show 2021 Online were previously released, however it has been confirmed that Lyn, the vocalist for Persona 5, will appear during the “Love Sega Special Live” concert which will be the last event during the “Sega Atlus Channel” live stream.