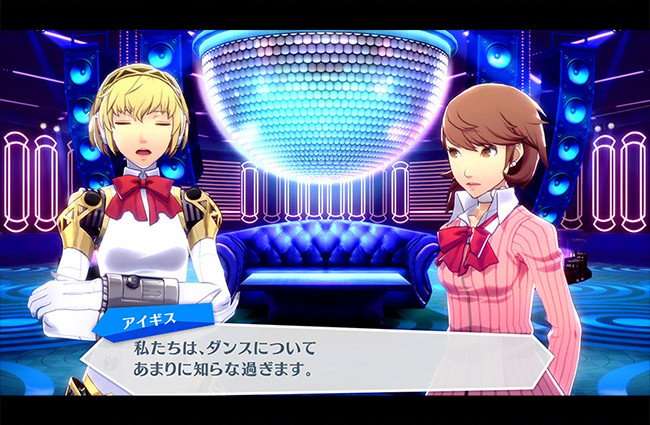 New screenshots were recently released for Persona 3: Dancing Moon Night and Persona 5: Dancing Star Night, which will be included as features in this week’s edition of Weekly Famitsu magazine #1522.

Some information has leaked from this upcoming feature via ryokutya2089, with information on the previously teased story mode replacement for both games.

There’s a mode called “COMMU” in which players will be able to enjoy conversations with the characters’ friends.

The setup for this mode in Persona 5: Dancing Star Night is that, one day, the hero wakes up in a location called “Club Velvet.” Caroline and Justine decide to hold a “dance party” there and, as a result, force the Phantom Thieves to participate in their challenge.

Conversation mini-events with characters are unlocked when certain conditions tied to specific characters are cleared. It is also possible to unlock new costumes and more through this mode.

An example of a mini-event featured in the Famitsu article is Futaba Sakura having a conversation with Ryuji Sakamoto in his room. This game will also have a similar “COMMU” mode.

The setup for Persona 3: Dancing Moon Night is that one night, the Specialized Extracurricular Execution Squad is gathered at “Club Velvet,” and are forced by Elizabeth to participate in a “dance party.”

The upcoming issue of Weekly Famitsu magazine February 15, 2018 or issue #1522 (releasing on February 1, 2018) will feature a variety of new information on the rhythm games.