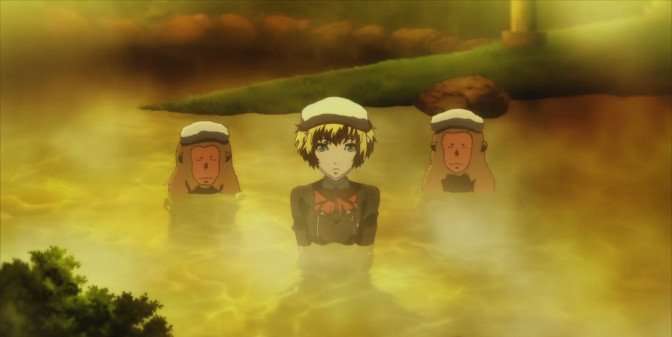 There is only one week left until the theatrical release of the third Persona 3 movie in Japan, and a small update regarding a few new pieces of merchandise has been made accordingly.

This follows last week’s update regarding merchandise associated with the release of Persona 3 The Movie #3, as well as an abridged showing of the first two films and a meet and greet with the voice actors.

In addition to the “P3 Super Seal” that will be given to those who go to watch the film in theaters during its first week of release, a document with background information and art for Persona 3 The Movie #3—called the “Persona3 The Movie Archive Book”—will be given out for free to quick visitors.

A new train ticket collaboration will be in effect to celebrate the release of the third Persona 3 film, as they had done with the first and second movies as well.

In addition to working with Japan’s “Port Island Line” and “Rokkō Island Line” transit systems, this will be the first ticket to also function with the “Hanshin” train lines.

The valid period for use of these tickets with the transit systems will be from April 1 to July 31, 2015.

In this case, “TCG” stands for “Theatre Cinema Group.” On April 4th, a collaboration membership card with TCG, featuring the new Persona 3 movie, will be released. This acts as a typical membership card, offering discounts with TCG.

Starting today, the official website for Persona 3 The Movie will be counting down to the release of the third film with handwritten notes from the film’s cast. Today’s note is of Ken Amada’s Japanese voice actor, Megumi Ogata.

Finally, a new meet and greet for Persona 3 The Movie #3 has been announced to take place on April 11th. It will take place before and after that day’s screenings at the T-Joy Kyoto and Yokohama Petersburg 13 theaters. The people that will be present include Megmui Ogata (Ken Amada voice actor) and Akira Ishida (Makoto Yuki and Pharos voice actor).