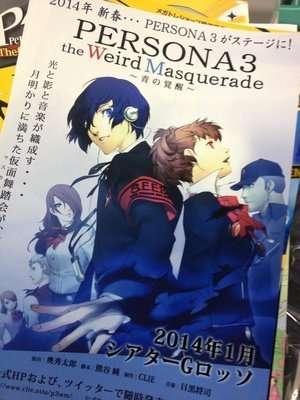 During the Persona Music FES 2013 that took place earlier today, a pamphlet revealed that like Persona 4, a stage play adaptation of Persona 3 will open at Tokyo Dome City’s Theatre G-Rosso in January 2014.

The stage play will be titled “Persona 3: The Weird Masquerade ~Ao no Kakusei~” (which translates to “The Blue Awakening”). It will feature both the standard male protagonist and also the female protagonist featured in the portable version of Persona 3.

Persona series composer Shoji Meguro will be composing the music for the play and Shutaro Oku will be responsible for the casting. Persona 4: The Animation script writer Jun Kumagai will also write the play’s script.