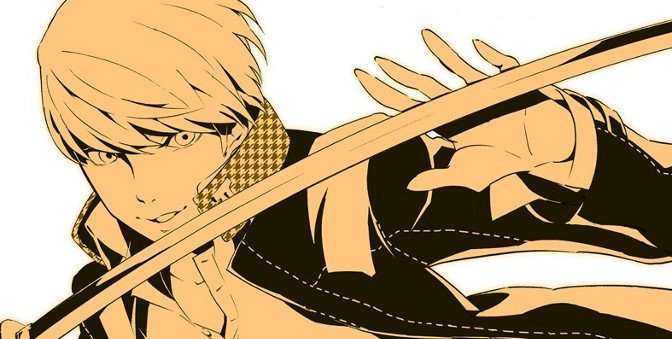 A solid adaptation with enough new content so that even the most hardcore fans of Persona 4 Arena will have something to look forward to.

With the Persona 4 Arena Ultimax manga on the horizon, I’ve decided to step back in time and revisit the 2012 manga adaptation of Persona 4 Arena, by giving it some critical scrutiny.

Following the immense popularity of Persona 4 and the desire to make a crossover between Persona 3 and Persona 4, Atlus decided to take the Persona franchise into a completely different direction by making their Persona 4 sequel into a fighting game. This seemingly odd decision ended up working in Atlus’s favor, as Persona 4 Arena proved to be immensely popular. In addition to bringing in long time Persona fans, hardcore fighting game enthusiasts were also drawn in.

Persona 4 Arena was a game that attempted to combine the storytelling pedigree of a Persona game with the robust gameplay native to Arc System Works fighting games. Though the game featured an ambitious story mode with multiple routes, the story was criticized by some for being needlessly long and convoluted. In addition, certain fans took issue with how some characters were characterized. Bearing that in mind, I think the manga adaptation does a good enough job of addressing those complaints while delivering its own unique story. 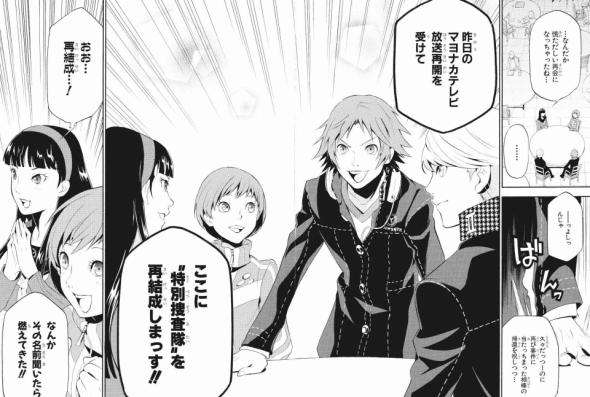 The manga condenses the entirety of Persona 4 Arena into three volumes (16 chapters). While this might sound like a recipe for disaster, it actually does a pretty good job of streamlining the story. It manages to do so by cutting every unnecessary aspect of the story out, leaving only the most bare essentials. This in turn improves the overall pacing, and the plot moves along at a significantly faster pace. A common complaint from the original game was that players had to sit through tons of text to get to the next story segment, but the manga moves at a much faster clip. That isn’t to say that it rushes through story either; it does a good job developing the narrative and delivering a story in an easy to understand manner.

As I mentioned earlier, the original game didn’t have a defined story mode, but rather multiple different story routes that each played out differently. This allowed every character to play the “hero”, but it also came with the consequence of making the story more repetitive. Worse still, some of the story routes directly contradicted each other, so it was impossible to come up with a single defined story. Fortunately, the P4A adaptation primarily focuses on the major players of each group (i.e.: Yosuke & Yu, alongside Aigis, Mitsuru and Labrys) and still manages to give the rest of the characters decent exposure. It’s worth noting that Elizabeth does not make a single appearance in the P4A adaptation. While this will inevitably disappoint some, her inclusion in the the original game made a busy story even busier. While it’s a shame that the manga misses out on her amusing antics, the decision to forego her appearance in the story was a good one.

Changes to the story

While the manga manages to stay faithful to the source material, the author managed to also work in several additions to it. Almost all of these additions serve to enhance and flesh out the original experience. From innocuous additions, such as Yu commenting on Mitsuru’s ridiculous limo, to Labrys’s interactions with each of the characters. It also manages to do away with some obnoxious character quirks that cropped in Persona 4 Arena. Those who were unhappy with Yukiko’s near psychotic penchant for boxed lunches or Chie’s obsession with meat will be happy to hear that’s mostly been done away with.

Though the characterization is far from perfect, I think the author does a good enough job of making the characters stay faithful to their original characterizations, (arguably even moreso than the game). It’s a good deal more silly than the original though, which might be a turn off to some. Perhaps the biggest change that comes to mind is the extended focus on Aigis and especially Yosuke. Though there wasn’t a main protagonist in the original game due to how the story was set up, the P4A adaptation opted to almost exclusively focus on Yosuke’s route.

Against all odds, the character who received the most focus in the P-1 Grand prix is not Yu Narukami (as one would expect), but the eternal second Banana—Yosuke Hanamura. The decision to devote the lion’s share of the focus to Yosuke seems like an odd choice, but it’s one that ends up working in the manga’s favor. I say this, because Yosuke’s route in the original game was one of the best. After all, the entire conceit behind the P-1 Grand Prix is getting good friends to fight each other, and Yosuke (someone who’s defined by his constant insecurities) is the perfect choice here. Some of his fights (specifically his confrontation against Yu) ended up being much more emotionally charged than in the original game. I was also surprised by the amount of character development he received (some of which wasn’t present in the original game). Overall, he’s a very entertaining protagonist.

On the one hand, there were some excellently crafted panels —the author was particularly good at twisting the expressions of the P-1 Grand Prix combatants.  This resulted in making some of the fights more memorable, as the original game relied on static sprites (so you didn’t really see much of a change in expressions during the confrontations here). The backgrounds were well done, and the P-1 Grand Prix was faithfully recreated in its entirety. Personas were drawn to look ominous and deadly, which worked really well for the various battles.

On the other hand… the characters tended to look off-model at times. This was especially jarring, as the Persona series is known for its excellent character designs. The character art tended to vary in quality; the author was good at recreating some of the characters (Yu and Yosuke) but struggled when it came to drawing others (Aigis and Rise). The artstyle wasn’t bad, but it seemed like it would be much better suited for a comedy manga. Overall, the art was very hit and miss.

The fight scenes were very well done for the most part. In the original game fights were (with a few exceptions) pretty similar from one another. The manga takes a completely different approach; in short, every battle has a decidedly different flavor to it. From the hilarious and disturbing Chie vs Yosuke battle, to the emotionally turbulent Yosuke vs Yu, no two fights felt the same. That said, the fights aren’t perfect. A few of them were pretty short. Overall, the fights were well illustrated, entertaining, and pretty damn cool sometimes, but some of them were shorter than I would have liked them to be. 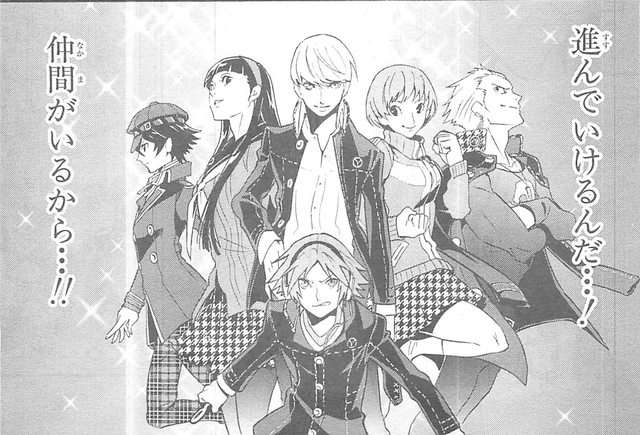 The Persona 4 Arena manga adaptation delivers a much more cohesive story than the original game. If you loved Persona 4 Arena, you’ll be treated to a fun adaptation that does everything it can to remind you of how you felt that way in the first place. If you weren’t a fan of Persona 4 Arena, you still might find enjoyment in the streamlined story, extensive focus on Yosuke, or the bombastic fights.