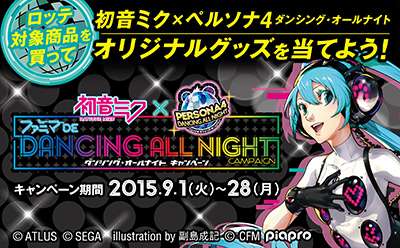 Along with today’s release of the Hatsune Miku DLC for Persona 4: Dancing All Night (and the bug fix update version 1.04), the digital version of the game has been discounted for a period of time.

Two months since its original release, the download version of P4D will be discounted from 6,980 yen to 5,980 yen, from August 27th to September 27th.

Additionally, Atlus have announced a Hatsune Miku x P4D “Famima DE Dancing All Night” campaign which will start on September 1st. Those who purchase Persona 4: Dancing All Night in FamilyMart convenience stores in Japan will be entered in a lottery for original stickers and clear files.

The official FamilyMart website will have a P4D campaign page up when it starts.