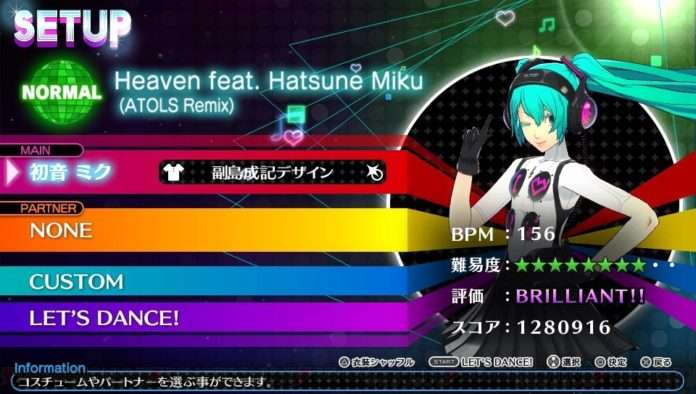 Following last week’s announcement that the Persona 4: Dancing All Night DLC character Hatsune Miku would be releasing on August 27, Dengeki has shown off gameplay footage of her in the game.

Hosted by Lupin Kojima and Migeru of Dengeki, the video shows off merchandise that Atlus had for sale at last week’s Comiket 88, as well as the upcoming Persona 4: Dancing All Night song “Heaven feat. Hatsune Miku (ATOLS Remix)” with the Shigenori Soejima designed Hatsune Miku as its dancer.

Like the previous DLC characters Tohru Adachi and Marie, her DLC purchase will come with colored wigs and contact lenses. Dengeki’s video also shows off gameplay footage of “Heartbeat, Heartbreak (TOWA TEI Remix)” with the song’s music video visuals (which is available as DLC).