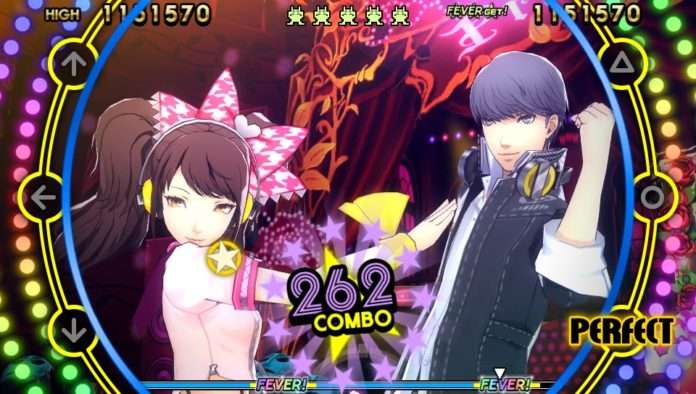 Japanese websites have posted new impressions of Persona 4: Dancing All Night after getting the chance to play the game, along with new screenshots.

Famitsu, Dengeki and 4Gamer all recently got the chance to play the upcoming PlayStation Vita rhythm game, and they have each written about it and revealed new screenshots for Persona 4: Dancing All Night.

A Famitsu editor got to play Persona 4: Dancing All Night and decided to choose the character Nanako Dojima (the hero’s cousin) and Kanji Tatsumi (because of his interesting dance style) to play as.

The editor who got to play was Kenji Kawashima, a Weekly Famitsu editor who also handles the Atlus relations website. He is not too familiar with rhythm games, which resulted in him having quite a bit of trouble. The game’s highest performance rating goes by the name of “KING CRAZY,” which can be obtained from any difficulty from EASY to ALL NIGHT (the highest difficulty). Kawashima attempted to play a song on the ALL NIGHT difficulty, and lost in about 10 seconds after suffering through a barrage of mistakes (and obtaining the NOT CLEAR rating).

PERFECT and GREAT ratings are the only ways to get the KING CRAZY rank.

The “FEVER” gauge increases as one successfully performs a “scratch” on the rainbow colored hoops using the Vita’s stick inputs. Fever leads to a chance at obtaining high scores, which is also an aspect in “Community Fever” dances for duets.

The Junes theme [as recently heard in this P4D commercial] now has a full version composed by Ryota Kozuka, which Nanako dances to. She kicks a soccer ball during the song and all of her movements are cute, so much so that Kawashima would get distracted and miss button inputs.

Kawashima states that, overall, the Persona rhythm game is something he enjoyed despite being inexperienced with rhythm games. He says that it would be wrong to ignore it by only thinking about how “It’s not an RPG.”

A Dengeki editor also got to play Persona 4: Dancing All Night and she chose to play as Yosuke Hanamura, who is the main dancer for the Lotus Juice remix of “Backside of the TV,” as the editor greatly likes the character. They also chose to play as the new character, Kanami Mashita, who iis the main dancer for the Daisuke Asakura remix of “Your Affection.”

The editor goes over the game’s controls, which are described in the game’s tutorial, as well as information gone over the above Famitsu preview. They state that the dancers look great in motion and maintain their individuality even in duets, using an example of Yu Narukami who has a cool and sexy composure while he is dancing with Yosuke, who keeps a light pop and casual expression.

The characters also show a lot of emotion while they dance, with appropriate changes in facial expressions and eye movement.

One of the editor’s favorite elements in Persona 4 were the relationships between characters, and that is maintained in duet dances, which are called “Community Fever.”

In “Free Dance” mode, a player cannot choose the primary character they will dance as for a song, as a song’s “Main Character” is automatically selected. However, a player can select who their partner character will be, so they can choose their favorite pair with specific choreography designed for each pairing. The editor states that it is charming, and that it brings a fresh feeling even when repeating a same song.

Yu and Yosuke pairings in dances will have them refer to each other as partners, along with appropriate unique choreography, following their buddy relationship from Persona 4.

People who did not play Persona 4 can still play this!

The editor states that those who did not play the Persona 4 RPG but are still interested in rhythm games should still play Persona 4: Dancing All Night. The music, world and characters might make them also interested in playing P4, in the end, and become a series fan.

In conclusion, the Dengeki editor states that he wants to see more of the game. Usually, he wants to sit silently and alone when playing a rhythm game like Persona 4: Dancing All Night, however he finds himself wanting to chat with other people while playing the game. If one decides to play this game on a PlayStation TV, he recommends sharing their experience with their friends on a big screen TV.

A 4Gamer editor also got the chance to play Persona 4: Dancing All Night, which he has been anticipating for quality music by renowned composers such as Tetsuya Komuro, Daisuke Asakura and Towa Tei.

In “FREE DANCE” mode, one chooses the music they wish to play as well as the costume for that song’s main character.

Because of the large amount of work involved with motion capture for the characters, a character is automatically assigned to a player based on their choice of music. In addition to music, difficulty and character costumes, it is possible to select the partner character that the main character will dance with [as described in the above Dengeki preview].

The editor proceeds to go over the controls. The touch screen is an acceptable input method with the music notes, with players having to touch the portion of the screen where the button icons appear. The editor finds it easier to use button inputs, but certain players might prefer the touch screen.

When the rainbow colored ring called “FEVER!” is scratched correctly, it will increase the gauge of three stars on the game’s screen. If all three stars are filled during a specific part of the song, the “FEVER” segment will start.

When Fever begins, the action on screen elevates. Depending on certain conditions, sometimes partners will enter a dance, with unique dialogue.

Button presses in the game are followed by sound effects when timed with the music notes. Rhythm games are usually better when the notes are accompanied with noticeable feedback to a pleyer’s inputs, so the editor was thankful for it. Since it can be a matter of taste, however, the option for sound effects with the inputs can be turned off in the game’s settings.+

In other words, those who are playing the game as Persona series fans can comfortably do so for the characters and the music, while the depth is there for rhythm game enthusiasts.

The character models that appear in the game are of a high quality. The modeling and animation was done well so that there is no weird clipping between models or other graphical mishaps. This is true also for when two characters are dancing simultaneously.

Scarf, jacket and skirt movement all looks natural, which is also true with the alternate costumes. This game should still look beautiful on a big screen, playing with a PlayStation TV.

If a playe’s score is equal or greater than a certain amount at the end of a song, the familiar character cut-in will appear as a character’s Persona is summoned along with a musical instrument.

I am anticipating the release in June

Several songs were unlocked for the editor in the preview they were playing, but only the first 4 songs will be initially open in the full version of the game, with the rest needing to be unlocked as a player progresses through Persona 4: Dancing All Night. The lineup of songs should make Persona fans happy, along with the remixes by famous musicians.

Songs can be added to a specific playlist, so that a player can simply watch a dance while listening to a song without having to play.

The editor was interested in learning about the game’s story mode, but it was unfortunately not available to play during the preview.

Overall, the game has beautiful characters and high-quality sound with good rhythm gameplay. It’s a great value for Persona 4 fans, but rhythm game fans of music enthusiast will surely enjoy it, as well.