Review copy provided by the publisher

When a Persona 4 rhythm game spin-off was first announced two years ago, I was perplexed. A couple of fighting games is one thing, but dancing? It seemed unnecessary, perhaps even exploitative of the fans invested in the series.

I was not convinced that Persona 4: Dancing All Night would be a good time until its lively theme song, “Dance!”, was revealed. As it turns out, both for those wanting to see more of their favorite characters in a new story and for those seeking a fun rhythm game, the latest Persona game is indeed a good time.

Officially labeled a “story-driven music rhythm” game, the two main features in Persona 4: Dancing All Night are its “Story Mode” and “Free Dance” mode. The latter, as its name implies, is where players go to play any of the game’s songs at their leisure. 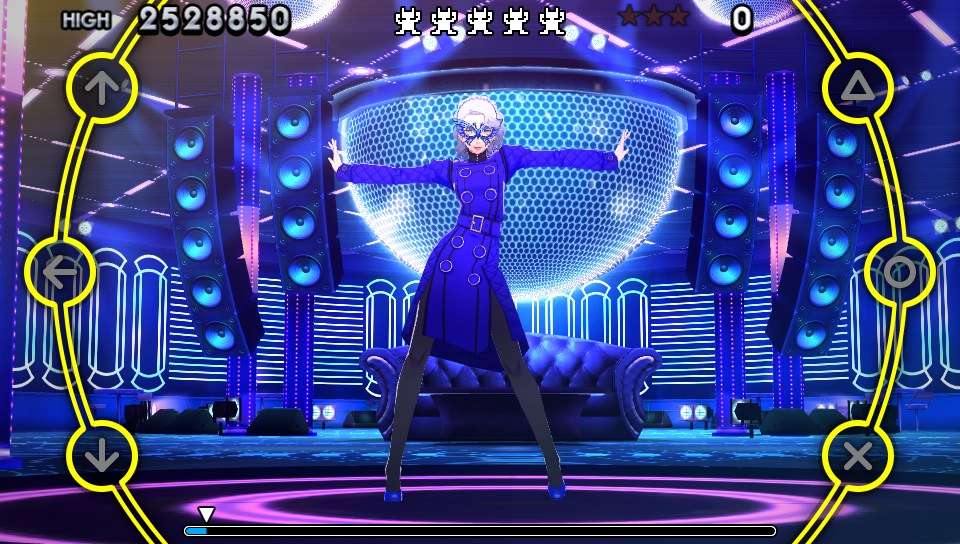 The gameplay is straightforward: notes appear at the center of the screen and move towards curved edges in the direction of the six face/directional buttons. Players hit the corresponding buttons in time with the music’s rhythm to get the rating of “Good,” “Great,” or “Perfect,” and continuously getting the last two will create a combo.

There are three kinds of notes: a regular, single note; “Unison Notes” requiring the simultaneous press of two buttons; and “Hold Notes,” which need to be held down for varying periods of time.

Along with those are “Scratch Rings,” which are hit by flicking one of the two analog sticks with the rhythm. Although they don’t penalize the player when missed, they can initially be hard to see because of how they tend to fade into the background. However, they become more apparent as the player starts to anticipate them.

Using the analog sticks to hit Scratch Rings feels intuitive, and a day-1 patch for the game will give players the option to use the L and R buttons for them. There are also touch screen alternatives to hit the notes and Scratch Rings, but that is an unwieldy alternate control method for harder difficulties. 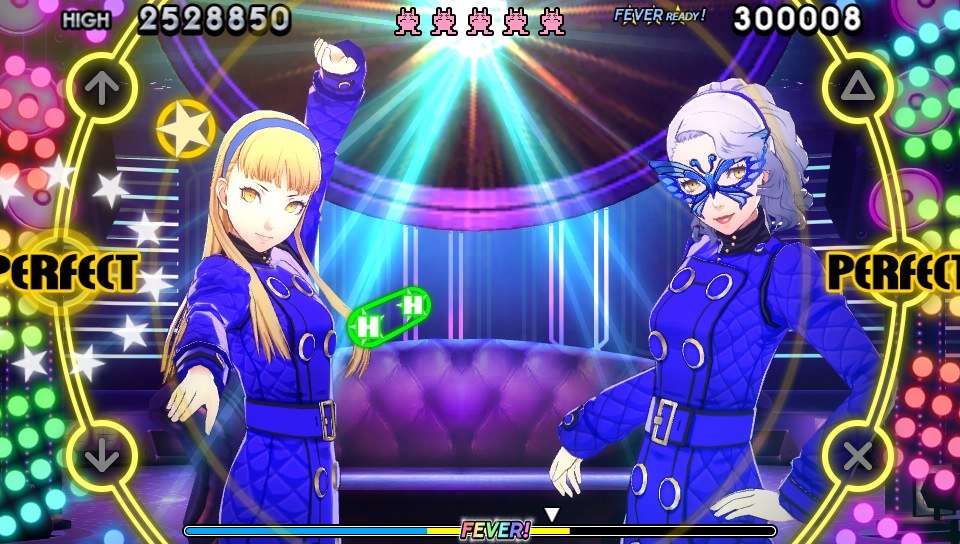 Persona 4: Dancing All Night‘s difficulty accommodates rhythm game players of all levels. Easy and Normal are lenient enough for those who are not used to the genre, while Hard and the fourth difficulty level, “All Night,” are there for those seeking a challenge. The last difficulty particularly satisfies the purpose of a good challenge, but actually gaining access to it is very troublesome.

To unlock the hardest difficulty level, one has to: finish story mode, complete all of the songs at least once in Free Dance mode and, finally, purchase all of the items in the in-game shop (more on that later). It is a time consuming and unnecessarily cumbersome process when, starting the game, one might want to play the game at its most challenging without having to go through needless preliminaries.

Unlike another rhythm game series that P4D resembles, Hatsune Miku: Project Diva, Dancing‘s difficulty comes from its very low tolerance for missing notes and not from having to manage a plethora of them. Missing only five notes in succession on Hard or All Night will immediately end a song with a “Not Clear” result, and missing notes in general will lower the player’s “Hype Gauge.”

The Hype Gauge is represented with demon icons at the top of the screen (a reference to early Shin Megami Tensei games), and a song has to be finished with those icons in green or multi-colored to pass. If they are white, yellow or red at the end of a track, a “Not Clear” result will be earned. The gauge increases as notes are successfully hit with “Great” and “Perfect” ratings, and lowers as notes are missed.

While the difficulty seems harsh at first, and the transition between Normal and Hard is rather abrupt, I appreciate Dancing All Night’s emphasis on accuracy, despite the fact that the game is lenient when it comes to the timing for hitting notes. 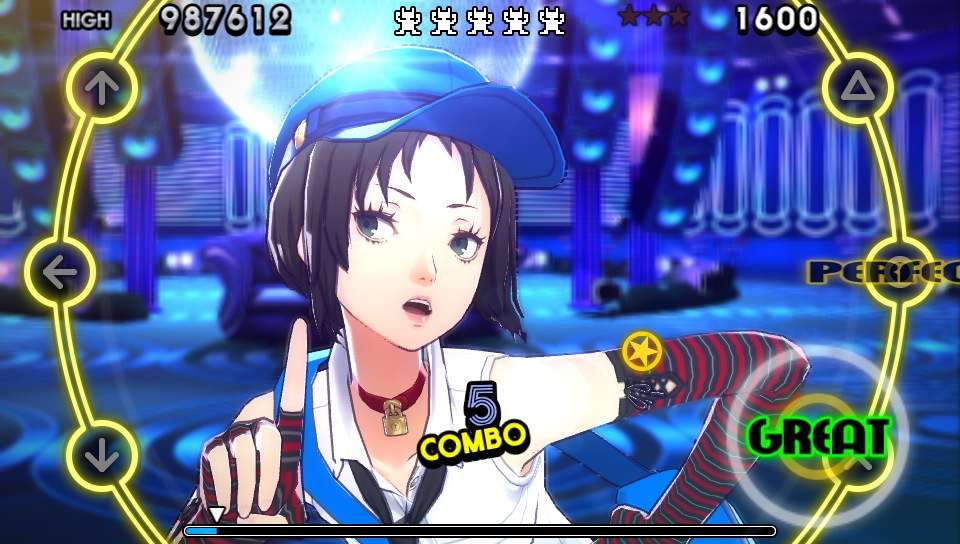 Several options are available to customize Persona 4: Dancing All Night to one’s tastes. One of the default options has characters constantly talk and vocalize in the background while playing a song, which quickly becomes irritating and distracting, but all the voices can be turned off (in the day-1 patch). The speed of the notes can be adjusted from 1 to 7, depending on how fast one wants them to move.

Most of the tracks only have a single selectable character as its “main dancer,” but this is compensated by each character in the game having their own unique dance style. Different choreographers were assigned to each character, lending to their personality appropriately being represented through their way of dancing.

Furthermore, each song has a set of partners that can be chosen for the main dancer to perform with, who come into play based on the player’s performance in a song. Each duo has their own unique dances and flourishes for specific segments, a nice touch which changes for each song, making one want to see as many pairings as they can.

Unfortunately, unlocking different partners is a laborious process, and it necessitates clearing a single song on Easy, Normal, Hard and All Night if one wants to freely choose among all partners available for that particular track. The game makes one want to see all of the different pairings for their unique dances, but unlocking partners is a time consuming process which forces the player to play on difficulty levels that they might not want to. 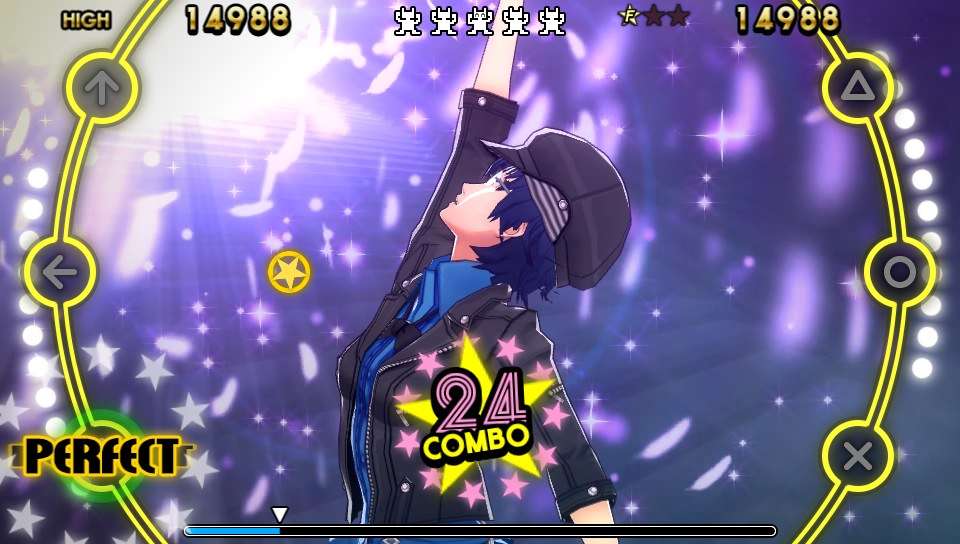 The music in Dancing is mostly great, using source material from Persona 4‘s memorable and catchy soundtrack. Many talented composers contributed to remixes for the songs—such as Norihiko Hibino of the Metal Gear Solid series and Akira Yamaoka of the Silent Hill series—providing a good amount of variety to the type of music in the game.

While there is an acceptable number of base level tracks with 27, I found it to be an odd decision that there are several songs with multiple versions when there are well known Persona 4 tracks that didn’t make the cut. For example, there are three separate versions of Pursuing My True Self, and two different version of three other songs.


Each character has a variety of costumes and accessories that can be purchased from the in-game shop in exchange for in-game currency (P$), and although the variety of appearance options included with Dancing is good, the amount of paid aesthetic DLC is significant. This might upset those who prioritize having as many options as possible in the base game. 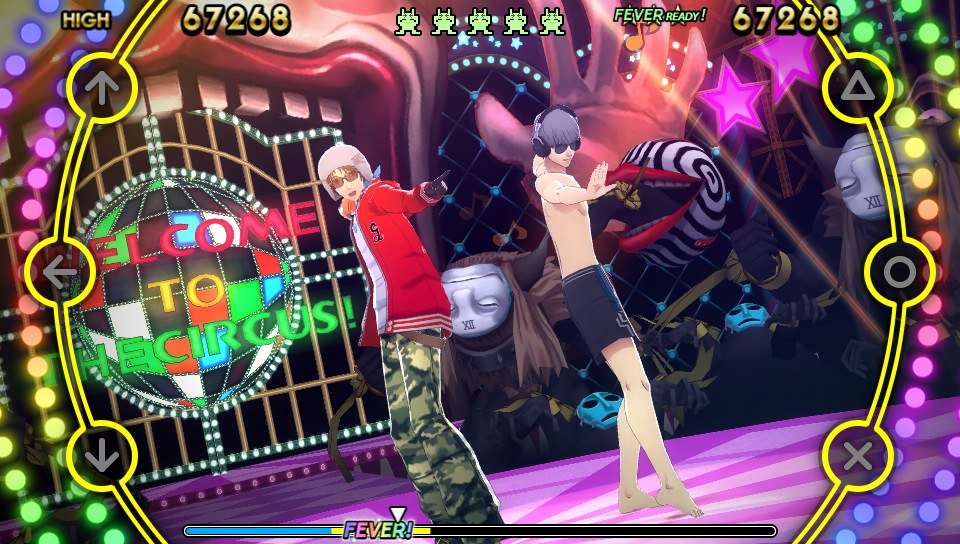 The last important customization option consists of the items which can be purchased with P$. Split between “Power Ups” and “Game Settings,” these items fundamentally change note charts in Free Dance mode and they have varying effects.

Power Ups lower reduce one’s score and grant beneficial properties, such as fail a song even if the gauge drops completely. Game Settings do the opposite, increasing the amount of P$ and score rewarded by changing how notes behave, like an item which mirrors the direction of the notes.

Mixing and matching these items makes playing the same song feel refreshingly different and it increases the skill ceiling after one thinks they’ve mastered a certain track. 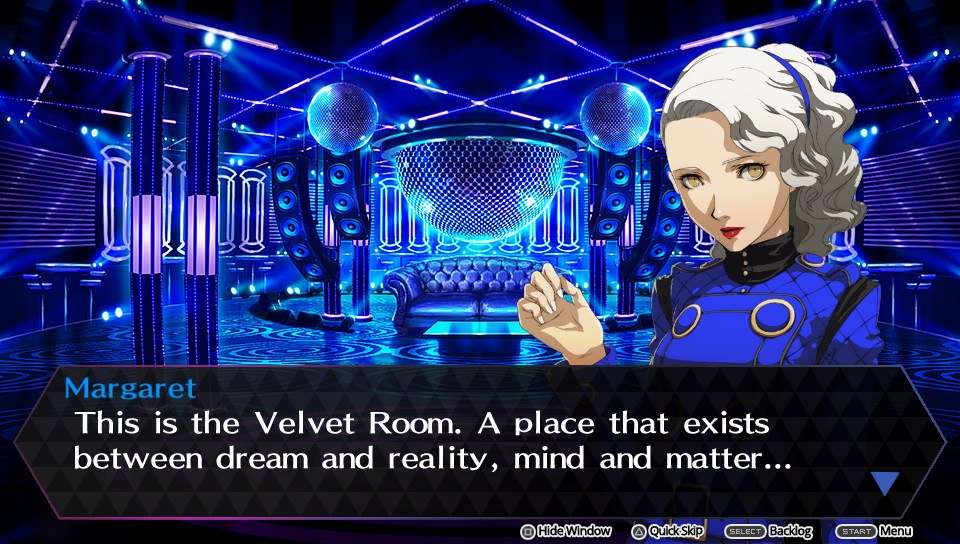 The story is the other major component of Persona 4: Dancing All Night. It’s presented as a visual novel with branching paths like the Persona 4 Arena games, but with more dialogue options.

Rise is set to perform at an upcoming concert alongside an idol group called Kanamin Kitchen, but the group’s members mysteriously disappear. Surrounding this is a rumor that if one goes to the concert’s website at midnight, they will see a strange video of a dead idol dancing and, if they watch the video until the end, they will be taken to the “other side” to never wake up again.

More so than the previous Persona 4 spin-off game stories, Dancing All Night‘s intrigue is the most alike the original RPG’s story, both thematically and literally, as the Investigation Team sets out to find the members of Kanamin Kitchen in a world dubbed the “Midnight Stage.” 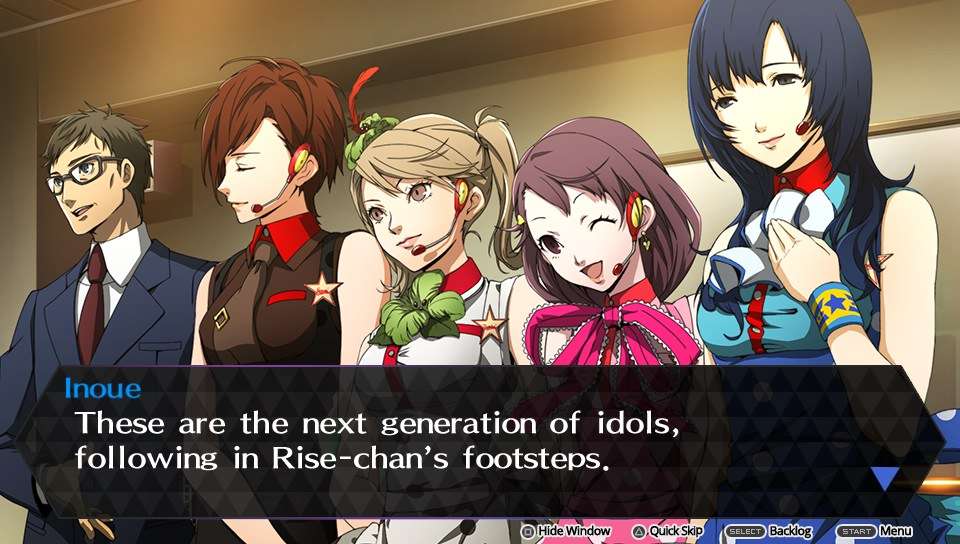 Many of the new characters Dancing All Night introduces to the Persona series are likable, but not enough time is spent devoted to fleshing out any one of them with the exception of Kanami. This makes the internal struggles some of the new characters deal with feel like unearned tear-jerkers, executed in haste and consequently making them feel superficial.

Despite this, following the Persona 4 cast in what may be their last adventure (for a long while, at least) is enjoyable. Unlike previous spin-offs where the characters oftentimes represented one-dimensional versions of their former selves, the Investigation Team in Dancing are done justice without revolving around a handful of easily identifiable tropes. 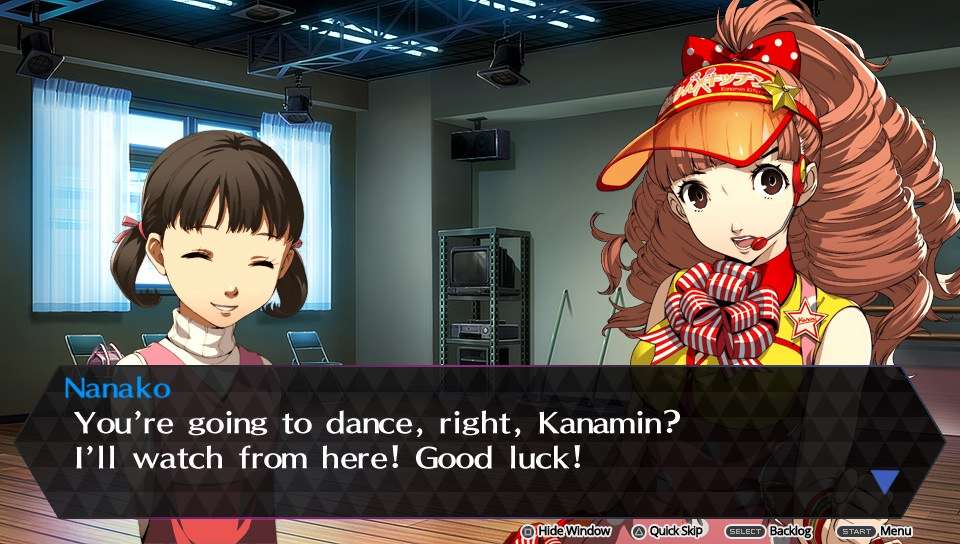 While the overall pacing suffers at times and the concept of “bonds” manifests itself far too often for its own good, Dancing still manages to weave an interesting and surprisingly somber narrative about idols. There are several harsh swings in tone between a lighthearted mood and a dark one, and while Dancing is not quite on the level of a Perfect Blue, it still manages to be effective.

On the point of gameplay in the story: Most of the “Free Dance” mode songs are featured in Story Mode, however there is an inexplicable omission of “Hard” as an optional difficulty level. The only options are “Easy” and “Normal,” which made the gameplay sequences during the story to be a slog to play through, as I sought more challenge from the note charts than the game would provide. 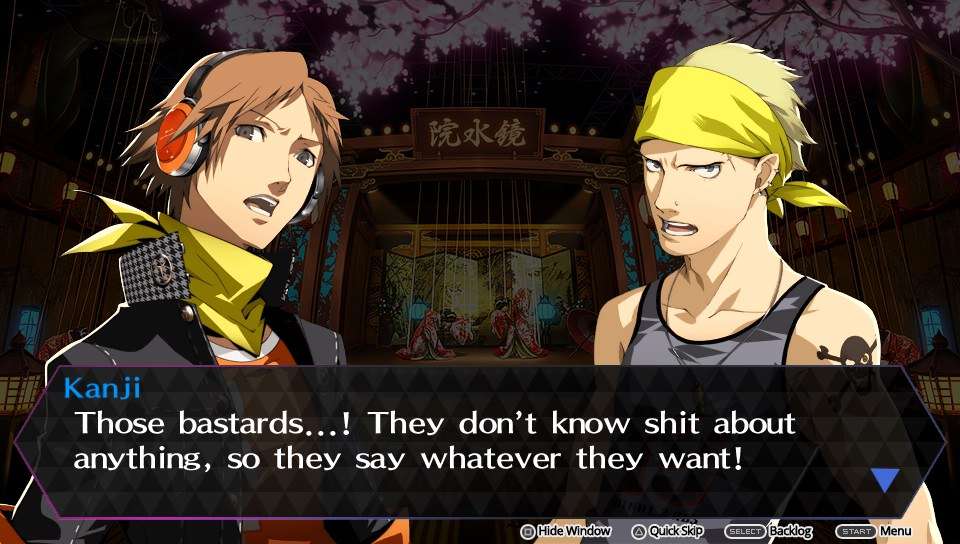 Persona 4: Dancing All Night‘s rhythm gameplay is solid and addicting for players of all skill levels. The story has its missteps and pacing issues due to its repetitive nature, but seeing the Persona 4 cast in a new adventure with a compelling set of new characters makes up for it. Dancing manages to be a proper send-off to the Persona 4 series, despite being a rhythm game that no one could have expected when Persona 4 came out in 2008.