This song was previously announced as a free DLC track, and it will feature anime cutscenes from Persona 4 Golden as its in-game visual music (so there’s no main character for this song). The BPM of “Shadow World (DE DE MOUSE shadow swing mix)” is 116, and it has been added to the official website’s ‘Music’ page. 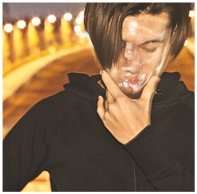 The composer behind this track is the DJ DE DE MOUSE. He is inspired by tribal music from Tibet and Indonesia for his music, and he is even influenced by the sounds of children’s voices for his songs.

From Acid House to Amen Break, and Hip Hop to Fusion, he links key words together to produce new sounds for the Electric Scene. A unique individual with his original style, known as DE DE MOUSE. His concert style consists of individuality and is full of energy, with a creative imagination and aggressive band ensembles which includes twin drums; he dramatically edits dance remixes to produce one-of-a-kind soundtracks.

The person behind the creation of the video this time is called ‘gyudon(whitepuzzle)‘. The main emotion they wanted to convey was that of the first time one clears Persona 4, and they hope that viewers recall that feeling even a little bit at the end of watching the remix video.