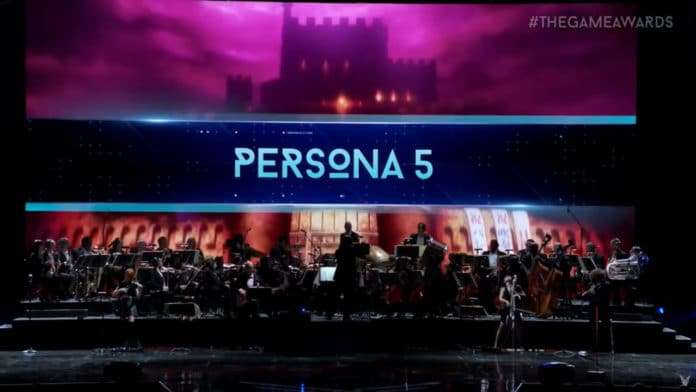 Persona 5 was previously nominated for several different categories for awards at The Game Awards 2017, and during the ceremony on December 7th, it received the award for “Best Role-playing Game.”

The award was mentioned by the host Geoff Keighley, however it was not physically awarded to a representative of the game.

The games nominated for the category of best RPG were:

The Persona Channel has also written a post for the award.

An archive of the 3-hour long award ceremony can be seen on YouTube.

The award ceremony opened with an orchestral medley of games featured at the show. The medley started off with a remix of Persona 5‘s signature theme, “Life Will Change.”

Additionally, a final performance was held, representing each of the game of the year nominees. For Persona 5, a remix of “Rivers in the Desert” was performed:

The event featured a video segment from comedian Conan O’Brien riffing on the game of the year nominees, including Persona 5:

Conan O'Brien saying what he thinks of Persona 5 at #TheGameAwards2017 pic.twitter.com/X9cqCOFQfV

Persona 5 producer and director Katsura Hashino gave a message of appreciation for the game’s reception in the West:

I am extremely humbled and honored that Persona 5 received the ‘Best RPG’ award. I’d like to thank everyone on behalf of the development team. I never imagined Persona 5 would be recognized worldwide, considering it is a game about adolescents set locally in Tokyo, Japan, and does not have open world features. I cannot express how happy and also proud I am that so many people around the world enjoyed the game design regardless of cultural background and knowledge of the setting. The development team and myself will take on many projects to come, but we’d like to look back at this award as encouragement to continue creating unique gaming experiences that many of you can empathize with.