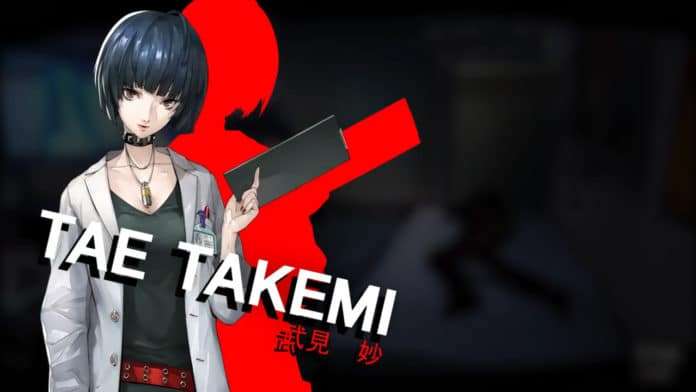 Every good phantom thief knows that a healthy network of “business associates” makes or breaks a night of criminal mischief. That’s why it’s so important in Persona 5 to build and maintain relationships with Confidants such as party members and various people around Tokyo. Deepening your bond with Confidants unlocks special skill bonuses, useful services, and more that are vital to the success of the Phantom Thieves. Learn about three of them below!

This frightening looking individual is the proprietor of Tokyo’s finest airsoft gun shop called Untouchable. Since the Phantom Thieves need to arm themselves against all types of enemies, you can see why keeping a man like Munehisa close is important. Helping him out will unlock a wider selection of wares, discounts, and even an option to customize certain airsoft guns! If you’re a gun nut, you definitely want to stay in this guy’s good graces.

If you’re feeling under the weather, you may want to stop by Tae Takemi’s medical clinic. Even though it’s located in a shady alley, her clinic is THE place to treat any injuries sustained during Phantom Thieving. Helping Tae with her “experiments” unlocks stronger health potions and consumables that can help turn the tide during fights. Yes, she may have a dubious reputation, but who else are you going to rely on for medicinal needs?

After the protagonist is given a second chance in Tokyo, he’s reluctantly taken in by Cafe Leblanc owner Sojiro Sakura and temporarily calls the attic of the café his home. If the protagonist chooses to help run the café throughout the game, Sojiro will teach him various coffee and curry recipes. How does that help the Phantom Thieves, you ask? Well, crafted coffee and curry can be consumed during dungeon crawls to restore SP. That’s pretty important, so be sure to stay on Sojiro’s sweet side in order to get those recipes! Oh, and he’ll also drop some fun facts about coffee here and there if you’re into that sort of thing.