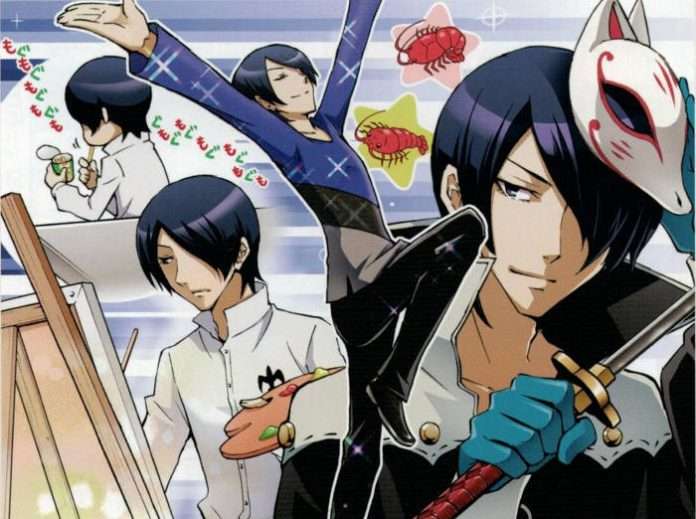 The second volume of the Persona 5: Mementos Reports series of fanbooks was released in Japan on September 27, 2019. It includes Persona 5 related content like fan surveys, comparisons between the English and Japanese versions of the game, and polls.

This post focuses on the Q&A section of the book, where the Atlus Persona Team responds to Persona 5 questions from fans with illustrations from guest artists. The section covers May 5 to July 9 in-game (comprising Mardarame’s Palace and Kaneshiro’s Palace).

Q: There’s a scene where if you tell Yusuke “We have too many dudes”, he responds with “Then would you prefer I dress as a woman?” Personality-wise, would he have been willing to crossdress if he had to?

A: He wouldn’t be opposed to it. At his core is the pursuit of “beauty,” so if he feels that crossdressing might bring him closer to discovering the essence of beauty, he would be willing to do it.

Q: After completing Madarame Palace and hearing Yusuke’s story, I started to worry about his eating habits… How does he get by on a daily basis with his limited money and food?

A: His spending priority is “Art > Personal Appearance (= Beauty) > Food.”

Q: Yusuke can often be found in Shibuya’s underground area. Does he get there by train or by foot? What does he do about traveling expenses?

A: He typically walks everywhere, unless he’s extremely tired, needs to hurry, or the destination is simply too far.

Q: I’m curious about Yusuke’s eating habits from when he was in Madarame’s care. By the looks of it, they would go for sushi together and he’d be able to pick his favorite hot pot ingredients, so could it be that he actually got to eat surprisingly luxurious things?

A: His meals were mostly Japanese cuisine, and he did get to eat quite nice things, within reason.

Q: The game stated that “Sayuri” was Madarame’s debut and representative work, but it seems that it would’ve been quite a late debut. He was originally a diligent art student, so was it the long years of unrewarded work that set him on the wrong path?

A: As a painter, he was a late bloomer. As he said in the game, it was hard to make a living as an artist. He suffered through his youth before finally managing to obtain glory, and then was twisted by his obsession with it. 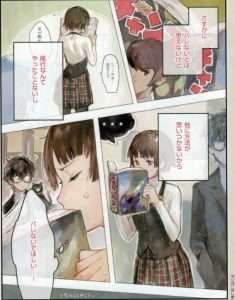 Q: Makoto’s stalking was completely obvious, but did she think she hadn’t been noticed? (If so, her silliness is too cute…)

A: She wasn’t naïve enough to think so, but she’d never done something like that before, and she couldn’t think of any other method. So, she just hoped he wouldn’t notice!

Q: Besides the protagonist, do the other Phantom Thieves members have outside friends? To be honest, it doesn’t seem so… but after resolving their cases and advancing their confidants, do their friendships change?

A: The Phantom Thieves members are mostly the ostracized type, so they don’t have many friends. But that’s why they’re prepared to sacrifice themselves for someone they approve of.

Q: I read in Persona 5 Maniacus that Makoto is a bit of a health nut. What was the reason why she became that way?

A: It was because of Sae. Since it’s just the two sisters living together, when it comes to meals, she might see her from a motherly perspective.

Q: What does Sae think of Makoto’s cooking? Also, how does she really feel about Makoto’s daily chores? (I wonder because Sae can be harsh on her at times…)

A: To Sae, it’s the “taste of home.” Just like how a child sometimes forgets what a blessing their parents’ cooking is, Sae has times like that with Makoto’s cooking as well.

Q: What’s Akechi like at his own school? (Is he popular? An outcast? Does he attend all his classes?)

A: He balances work alongside school, as long as it doesn’t affect his university prospects. For example, it’s similar to a high school TV star who’s taking entertainment courses. He’s definitely popular, and the teachers and male students respect him highly as well. Akechi is aware of this himself, and does his best to avoid standing out more than necessary, in order to not antagonize his peers.

Q: Akechi can be found in front of Yon-Germain (the bakery at Shibuya Station). Is he just passing by on his way home or is he trying to get closer to the protagonist? Or is he a fan of that shop?

A: He gets food there on his way to work, because it’s fast and he’s very busy.

Q: What were Yusuke and Makoto like before high school? Were they different from how they are now?

A: Both of them were still childish in middle school and hadn’t had to make many life decisions. They suffered less back then and probably led cheerful lives. It’s a common path.

Q: Ryuji and Mishima are together at the start of Kawakami’s confidant, but do they continue to become closer friends with each other? They kind of seem like they’d be partners in crime!

A: They have completely opposite personalities, so without the protagonist bridging the gap, it’s hard to imagine them doing something together on their own.

Q: The flyer stands at the clinic and the military shop change at regular intervals. Do Takemi and Iwai select those themselves?

A: It seems to be done through an agency. 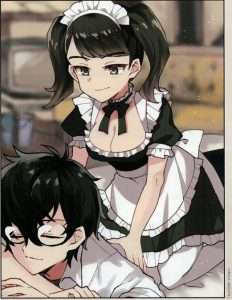 Q: Is there a reason behind the name “Becky”?

A: Since she felt guilty working as a maid while being a teacher, she picked an alias that was very different from her real name, Sadayo.

Q: I understand why Kawakami needed money, but why did she pick a maid service? Was the pay good? Did she like the outfit or the work? Or all of the above…?

A: She was leveraging her housekeeping experience to look for a better job… and that’s when she found the maid service job.