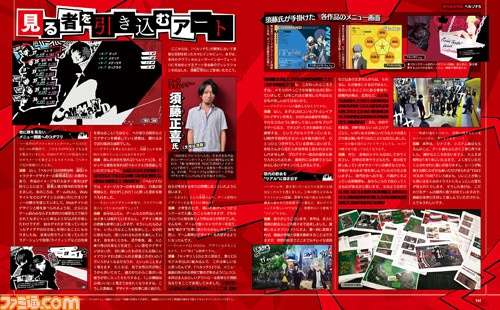 This week’s issue of Weekly Famitsu magazine #1449 will contain a new Persona 5 16-page feature consisting of an information roundup and a developer interview with three of the lead creators behind Persona 5 at Atlus.

This follows the announcement from the previous issue that it would have a special Persona 5 feature.

With Persona 5 soon approaching its release, a large feature for the game will be included in the September 22, 2016 edition of Weekly Famitsu magazine (releasing on September 8, 2016.)

In addition to an introductory roundup of the fun game content, there is an interview with the game’s art director, lead sound designer and the sound composer.

The interview discusses the artistic talent behind the latest entry in the Persona series, the process behind the game’s sound production such as sound effects and the nature of the background music. Each of the three developers have their own interesting stories to tell.

Additionally, a new regular developer column by Katsura Hashino named “Deep look into the Persona series” will be beginning in the latest issue of Famitsu. The first entry will be about the “Juvenile School” theme.