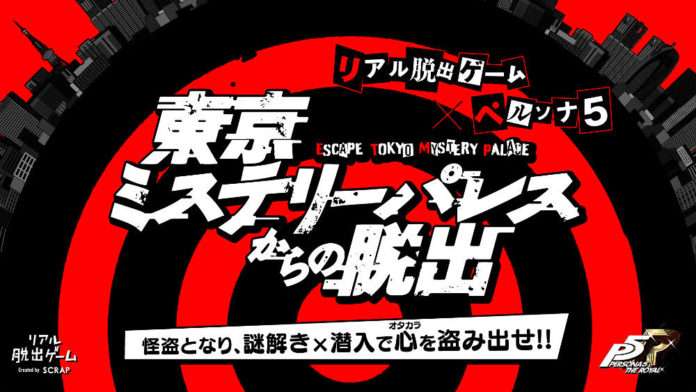 Real Escape Game by Scrap is a Japanese based company which specializes designing escape games based on known properties. “A live interactive puzzle event where teams solve mysteries and clues within a time limit to escape the given scenario.”

The company has announced that they will be collaborating with Atlus for a Persona 5 themed escape game called “Escape Tokyo Mystery Palace.” It will be held in July 2019, in Shinjuku at the interactive entertainment facility Tokyo Mystery Circus.

A series of mysterious incidents occur in Kabukichō, Shinjuku, where people are found hanging on the roof of buildings. A calling card from the perpetrator is sent to a witness of the crime scene:

The police have had a difficult time investigating this slippery criminal. In order to prevent another terrible incident, the Phantom Thieves decide to invade the criminal’s Palace.

Infiltrate a palace in real life, hiding yourself and eluding the enemy’s gaze!

Make your way through layers upon layers of traps and use your persona to defeat shadows!

Only a few hours remain until the notified date of the crime.

Can you steal their treasure!?

Become a Phantom Thief and take the challenge to steal the treasure! Let’s steal the heart of a rotten adult and reform them!

Dungeon crawling, capture the Palace! There’s another world called the Metaverse where the bad guys’ distorted perceptions are made manifest!

By infiltrating these Palaces, you can actually capture the enemy’s desires; their treasure!

After presenting your ticket, participants need to decide which Phantom Thief they will be playing as to solve the mystery. Joker, Skull, Panther, or Fox?

Read the instructions and notes, and then start the game. If you can capture the Palace within 60 minutes and defeat the boss, the game will be cleared!

And, of course, the navigator Morgana will be meeting and cooperating with various characters during the game. Use your persona to escape!

If you buy a ticket for the “Real Escape Game x Persona 5 “Escape from Tokyo Mystery Palace”, you’ll receive a calling card as a team member. This is shown on the day of the event at the reception desk to participate. 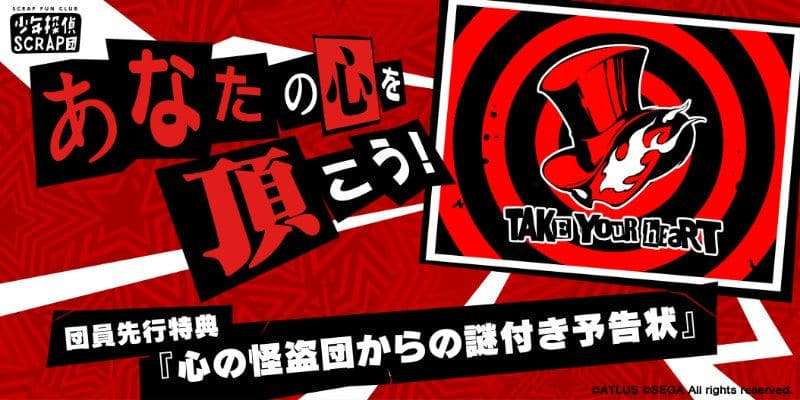 In the past, Atlus has had real life escape room games for Persona Q: Shadow of the Labyrinth in November 2014, Persona 3 The Movie in January 2016, and Shin Megami Tensei IV: Apocalypse in March 2016.